News in from Carina: they’re running a site-wide 40% off sale in honor of RWA! If you go to CarinaPress.com any time between now and 7/27, you can use the coupon code HRWA715 to get 40 percent off your purchases! Specifically, as per the photo, 7/27 at 8:59am Eastern Time! 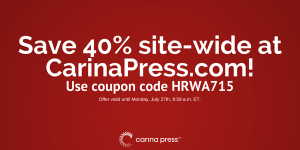 Note that this sale does apply only to purchases on CarinaPress.com itself, although of course you can still buy the books on all the other major ebook providers.

So if you haven’t gotten any of the Rebels of Adalonia books yet, now is a VERY good time! Here are the direct links to the Rebels books on the Carina site, and don’t forget, if you want to read this trilogy, you need to read them in this order!

Book 1: Valor of the Healer

Book 2: Vengeance of the Hunter

Book 3: Victory of the Hawk

And of course, the sale is for ALL Carina titles, not just mine! So this is a great chance to get some of the Carina titles I’ve featured on the Boosting the Signal posts, too!

Enjoy your shopping, all! 🙂

Norwescon is IMMINENT so here, have some Smashwords coupons

Dara and I will be heading to Norwescon tomorrow! Yay!

Y’all will be able to find me at the NIWA table in the dealers’ room, where I and several other members of the group will be joining forces to sell our books. I’ll have print copies of both Faerie Blood AND Bone Walker, so if you’re local and you don’t have the books yet and you want ’em, this will be an excellent time to get copies!

I will also be selling copies of the Free Court of Seattle Soundtrack CD on Dara’s behalf, so if you really want to make a fell swoop of it, you’ll be able to get both books and the CD all at the same time!

ALSO: for the digitally inclined, I have activated two 20 percent off coupons you can use to buy both books from Smashwords in DRM-free format!

The coupon code for Faerie Blood is ZS73N, and you can spend it here.

Likewise, the coupon code for Bone Walker is TA27R, and you can spend it here.

These coupon codes will expire on Monday the 6th, so use ’em now while the using is good! And if you’ve got the books already, please share the word of these coupons far and wide. Thank you!

Speaking of Bone Walker: Dara has now provided me with the official PDF copy of the book. If you prefer to read your ebooks in PDF format, I will be happy to hand-sell this version of the book to you. Directly from me is currently the only way to get this format, so if you’d like a PDF copy (and you’re not one of the Kickstarter backers who already got one), talk to me! And see the Buying From Me page for details on how to pay me for it.

MEANWHILE: friendly reminder that Victory of the Hawk is REALLY FREGGIN’ NIGH. Monday the 6th is ALSO important because that’s Victory‘s release date!

AND: you can now preorder the book directly from Carina Press right over here. I do get slightly more royalties for books purchased directly from Carina. BUT, don’t let that stop you from buying from the vendor of your choice, either–basically, I want you to buy the book, so do please buy it in whatever way is easiest for you! 😉

All preorder links I’m currently aware of are on the official Victory of the Hawk page!

One more thing: in case you missed it, the Here Be Magic author group I’m in has been posting our snippets of flash fiction based on submitted words from readers! You can find mine, a brand new Warder universe scene, right over here. Clickie to see what words I got for the March Melange, and how I used them.

And go check the blog for other fun scenes as well!

Let’s lead this post off with a couple of general reminders:

First off, the giveaway for Valor of the Healer is still in progress and running until Friday! As of this writing I have only six entrants, so your chances are really, really good at a shot at one of the two free copies I’ll be handing out. Nobody’s cleared the bar to get in on the draw for the audiobook yet, but there’s still time!

ALSO: I have a coupon for Faerie Blood live on Smashwords through Friday as well. Since Smashwords is the only place I can easily set up coupon codes, this doesn’t apply to any other place you can buy the book from, sorry! BUT, if you buy Faerie Blood directly from me any time this week I’ll apply the same 20% discount to the usual $2.99 price. I’ll also do so if you want one of my remaining print editions! So act fast!

Seriously, how much of an asshole do you have to be to steal the violin from Olivier Demers?

Y’all know that name around here by now, folks. Violin player for Le Vent du Nord. I follow him on Facebook. This past weekend the Quebec trad music community had a music festival, Chant de Vielles, and to all reports it went swimmingly. Except for the part where somebody walked off with M. Demers’ violin.

Y’all may also remember that I’ve posted before about what it feels like to lose a beloved instrument. Dara can certainly tell you all about that. So believe me when I tell you that it’s a kick in the teeth. And that somebody has seen fit to steal the fiddle that makes beautiful noises like this and this and especially this… well. Treebeard’s quote from The Two Towers comes to mind: “There is no curse in Elvish, Entish, or the tongues of Men for this treachery.”

And I’m just sayin’, people, my spouse is a supervillain. I have heat ray access.

Speaking of Treebeard or at least of things Tolkienish, if you haven’t seen it yet, I did put up Chapter 13 of the Trilingual Hobbit Reread last night!

Also, I put up part 5 of the series of posts on self-publishing.

And that clown car of FAIL re: sexism in publishing (with or without SFWA being involved) has yielded up another clown. My last report of Foz Meadows’ relaying how Jo Fletcher Books had taken down Rod Rees’ post and the followup to same turned out to be premature, since the posts came back up.

Turns out the second one was all about the author’s freedom of speech. Which, um, nobody was actually calling into question.

This being yet another example of people failing to remember that freedom of speech does not equal freedom from people calling you out for being an idiot or an asshole. You’re free to spout off whatever nonsense you like, yes. But the rest of us are free to call it nonsense.

That said, the clown car is thankfully being paced by the Mach Five of WIN. Discussion is ongoing as well about the big, big issue of harassment at cons. My own Dara has chimed in on the matter over here, talking about her experiences with harassment and pointing off to a couple other excellent posts of testimony on the matter, including one from filker Brooke Abbey.

And in a case of someone knowing how to use his position of privilege for Good, John Scalzi has announced his new policy for deciding what conventions he’ll go to. Spoiler alert: he expects them to have clear harassment policies in place. Thank you, sir. This is an excellent move.

ETA: And OH YES I almost forgot. came up with an excellent term for the ongoing brouhaha in SF/F, and the Internet’s reaction to same: SFWAdenfreude. My immediate reaction: NEW HASHTAG! Use at will, folks!

ETA #2: THIS JUST IN: Mary Robinette Kowal, hallowed be her name, has had ENOUGH OF THIS SHIT. *wild applause* I feel a buy of all of her ebooks coming on RIGHT NOW. >:D

ETA #3: And because at this point you really do need a scorecard to keep track of all the clowns pouring out of the car, here, have a thoughtfully compiled timeline of all the events that have been going on so far this year.