Those of you who follow me on social media, or who saw the posts that went up on angelahighland.wordpress.com, LJ, and Dreamwidth last night, know we lost power around 2:30 yesterday afternoon. We were down all evening, but at least as of right now, we’re back. 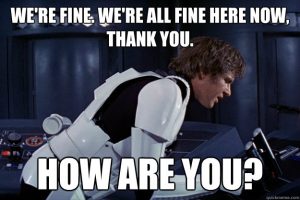 Yesterday evening, we amused ourselves with playing around with instruments and with listening to one of the Big Finish audio adventures off my phone, piped through a Bluetooth speaker. The Cloisters of Terror turned out to be a delightful thing to listen to during a power outage! In no small part because Mr. Baker was in fine form in that story.

Here are the sorts of conversations we have in our house when the power is out!

Dara (while trying to figure out the chord progression for a song): OMG this chart doesn’t HAVE an A flat! They just skipped it!

Me (nodding sagely): ‘What damn fool would want to play an A flat chord on a bouzouki?’

Paul: I think the fridge is going to need more than 4 buckets.

George, bless his little kitty heart, kept wandering around mewing in a sort of “EVERYTHING IS DARK AND WEIRD AND QUIET WHY IS IT LIKE THIS AND WHY ARE YOU ALL IN THIS OTHER ROOM OH HEY THE FIRE IS ON YAY WARM”. And once we settled in to listen to the audio, George curled up in front of the fireplace to go zzzzzzzz.

I went to bed around 10:30ish and woke up just before 1am when the noise of the neighbors’ generators shut up. I sleepily realized the clock was blinking, checked the time on the phone (which I was keeping by our bed), and noted 12:54. So our power must have come back just a few minutes before that, long enough for neighbors to go YAY and turn their generators off.

Dara brought the servers back up this morning, and I scampered out to go to chiro and Safeway and the booze store (so that I could replenish the cake vodka and Baileys supply, and OH BY THE WAY YOU GUYS, I did find another bottle of Pumpkin Spice Baileys, which is an actual thing that exists and you should try it if those are words that sound like fun to you). Dara is heading out now that I’m home again, as the Norwescon concom has a meeting today, and they kinda can’t cancel it, because it’s at the hotel and they’re contractually obligated to use the rooms when they’re booked for. But she’s going to scamper back here ASAP when the meeting is done.

As of this writing Seattle City Light has a mere 11 customers out. Puget Sound Energy has 5,125 down still. And I gotta say, cranky as I am that PSE has been so random in our power service this year, their crews were out last night working their asses off. And that we got power back in the dead of night means their crews were out there in the wet dark, working for us. So kudos to them for that.

The current High Wind Warning is supposed to kick in at 3pm this afternoon and run until 2am, with the peak winds now expected between 5pm and 10pm. Cliff Mass has his current forecast up here, and from what he’s saying, the storm is still aiming for north of us, but we’ll be on the very edge of it. Seattle proper may dodge a bullet, but chances are high that Kenmore will get hit harder. And even if damaging winds don’t smack us, chances are VERY high we will lose power again, possibly for days. Expect that angelahighland.com will go down again, in which case I will continue to post updates on angelahighland.wordpress.com as well.

And given that the wind conditions yesterday still caused quite a lot of damage (note the gallery of pics on the Seattle Times’ updates here, PARTICULARLY the snapped power pole), I’m still expecting things to be very, very messy tonight and into tomorrow.

Brace for impact, Cascadians. Charge all your devices. Do your laundry while you still have power. Songda is COMING.