So this is kinda lollertastic: Dara and I have a credit card that we’ve had via the University of Kentucky credit union, pretty much ever since Dara graduated college. This card generates points that we can trade in for swag every so often, a thing we tend to forget about. Recently the card folks reminded Dara that she’d accumulated a LOT of points, so she and I blew a bunch of them on getting some stuff.

And because one of the things available was a Kindle Fire in a couple different flavors, I decided, what the hell, I’ll get one of those! I chose the Kindle Fire HDX, the 7-inch one, on the thought that I could in fact use it for work-related purposes. (Which I can. Since Big Fish ships Android games for both the Amazon and Google Play stores, we do care about Kindle-specific stuff sometimes. And as I write this, I have in fact used the Kindle a few times to test stuff for my day job.)

Here now are my thoughts on this device, behind the fold!

Reading a Book on It

This being, well, a Kindle, I wanted to give it a chance to impress me with the book reading experience. So I made the first book I read on it Stronger Than Blood by Genevieve Griffin, which y’all may remember I gave some Boosting the Signal love to, back when I started that feature here. 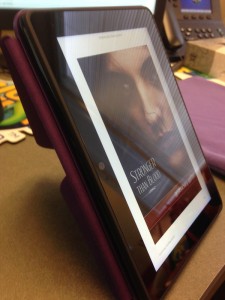 Stronger Than Blood on the Kindle

And I will give the device fair props for making it pleasant to read an ebook on it, despite the weird brown discoloration in the margins. It was certainly very easy to breeze right through the book, and the user flow in general was fine.

What I had not realized, based on what Dara was able to find on the card’s site for redeeming your points, was that this device was one of what Amazon calls their “Special Offers” devices. Which is Amazon-speak for “we’ll cut $15 off the price, but in exchange, we’ll show you ads on the lockscreen”. I found this actively annoying, despite the fact that I hadn’t had to pay a dime to get this thing. So I ponied up for the $15 to turn that off.

I note this up front because this was a thing that struck me pretty much right out of the gate, turning the device on. I also note this because it ties into my other major beef with the thing, which is…

… how hard Amazon has locked this thing down with the software it ships with.

To some degree, if you’re going to get a device that’s tied to a specific company’s ecosystem, you have to expect some lockdown. It’s logical to me that Apple expects iPads and iPhones to get their apps off the Apple app store. I was genuinely surprised to discover that my Nook HD lets you install apps from Google Play–possibly because nobody is actually bothering to write apps for the Nook app store? I don’t know! So I’m not really surprised that Amazon doesn’t let you go to Google Play to get stuff to put on the device.

Nor does it surprise me that the Fire’s entire screen is set up with the express purpose of getting you to interact with content you’ve purchased from Amazon, and to get you to buy more content. The Nook HD does the same thing, talking to the B&N store.

But what does surprise me is how hard the device is locked down above and beyond that, to the point that you cannot personalize it. You can’t set your own desktop wallpaper or lockscreen (assuming that you’ve turned off the thing that shows you the ads). You can’t change the color scheme of the menus. You’re pretty much stuck with the black background and dark menus.

This makes no goddamn sense to me whatsoever. And I’m not even talking about Amazon trying to prevent people from, oh, say, rooting the thing and installing their own goddamn launchers on it. I’m talking about preventing average non-techie users from putting a picture of their cat on the lockscreen, or changing the color scheme to something they find more congenial or easier on their eyes. I cannot suss out the train of logic that leads to that decision.

Likewise, I’ve had a bit of experience playing with different Android devices while testing at work. As a result, I find it inherently annoying that I cannot get easily get to a tray of running apps on this thing like I can on, say, a Nexus 7 or a Nexus 10 or a Samsung phone or whatevs, and close down an app I don’t want to use anymore.

Note: I am aware, after considerable Googling on the topic, that in theory an Android device is supposed to be clever enough to manage your resources for you, and that you could in fact confuse it if you shut apps off yourself. However, me? I’m a power user. I tend to have a lot of things open at once, and as a result, I see my battery life AND my device performance start taking a hit. I’ve seen this on the Nook, and I’ve seen it on the Kindle, too.

I note furthermore: I can dismiss apps on the Nook when I’m not using them with a single tap and swipe, similar to how I can do it on Android devices at work. I can’t do it on the Kindle without having to go through several taps to get into the App settings, and force-closing an app from there. This is ANNOYING.

All of which is a shame, because I like the device itself. Mostly.

Design-wise, I do actually like the thing. It’s sleek. It’s nicely suited to the size of my hands. The screen is nice and bright and clear, and since I expected I’d be carrying it around to and from work, I opted to buy it a case from Amazon. I really like the case, a nice foldable thing that lets me set the device to portrait or landscape mode.

The first quibble I’ve found with the device itself so far is that I have occasional screen flicker issues when I’m playing Fairway Solitaire Blast. I don’t know whether this is a problem with the device, or a problem with the game, since the game is the only place I see this happening. But I’ve seen others reporting screen flicker problems, so this seems to be a known issue with the Fires.

The second quibble is that when I read an actual Kindle book on it (I have a few, mostly bought from authors who publish exclusively to Amazon and who have in fact written something I want to read), there’s a weird brown discoloration in the margins. I don’t have this repro in other reading apps, so I don’t know what’s up with that.

Which leads me to…

Putting Other Apps on It

I have in fact put a few other apps on this thing, since that’s doable without even having to root it. Namely, I’ve put the Nook and Kobo apps on it, because LOL. And I also grabbed Dropbox, because Dropbox is necessary to my daily existence and it made no goddamn sense to me that Dropbox was not available on the Amazon app store.

(Well, for values of no goddamn sense accounting for “because Amazon’s got its own cloud storage and doesn’t want to promote its competitors”, yes yes yes, I know. It’s annoying. But there’s only so much I’m going to bitch about that, because I did after all get this device for free.)

It is however quite lollertastic to me to have the Nook app on here. 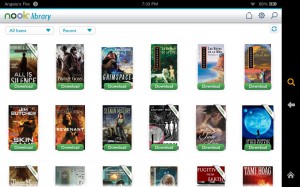 My Fire’s Being a Nook for Halloween

Playing Games on It

Since I have in fact played Fairway Solitaire Blast on this thing, it behooves me to mention that I do find it a pleasant game-playing device. I do in fact like it better than my iPad, since it’s smaller and therefore not as heavy in my hands. (I have to balance the iPad weirdly in my left hand so my right hand is free to tap on things, and that’s a little uncomfortable after a while.) 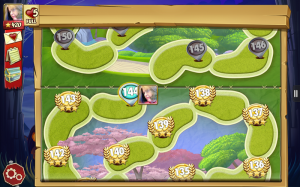 And we DO have a bunch of Big Fish games available for the Amazon store. You should play them, if you’re a Kindle owner. Not that I’m biased or anything. 😀

I haven’t watched any video on it yet, though Dara and I do have a Prime membership, so I want to try that. I will report back on how well that works.

Should You Buy One?

If you’re already buying a lot of book and/or video content via Amazon, sure why not. It’s a fine little device, and since its main goal is to help you talk to the Amazon ecosystem, it does do that well.

If you’re a power user like me, though, you can do better. The device itself is lovely, but you’ll have to go through the trouble of rooting it and customizing it to your liking. Some of you may find that fun and challenging. But if you just want a device you can set up the way you want it right out of the gate, my verdict is that you’d be better off just buying a general Android tablet that isn’t tied to Amazon’s specific ecosystem. You’d need to make the call as to whether the device’s actual physical specs appeal to you, vs. what other comparable devices (say, a Nexus 7) have to offer you.

Discussion with a Kindle-owning friend (thanks James!) suggests that I’ve got a faulty screen on this device. I’m now in contact with Amazon’s customer support people to ask them about what to do if I need to return this thing and get a fresh one–specifically because I got it via our credit card’s points redemption program, rather than from a physical retail store or directly from Amazon themselves. More on this as it happens!

ereaderskindle fire hdxwhat ereader should I get?
October 30, 2014 by Angela Korra'ti

How to read ebooks, Part 6.2: Adobe Digital Editions on Linux