As y’all know, my day job is QA Engineer at Big Fish Games. But what you may not know, even if you’re a regular player of our stuff, is that we’ve been pushing out hard into the mobile arena–and that now we have not only iOS games, but Android games as well!

I mention this because a) that shiny new Android page of ours was tested by yours truly (woo!), and b) since we’re having more of an emphasis on Android devices at work, I felt it was time for me to acquire one. We have a store of devices to use to test on when I’m at work, but I periodically do work from home. Therefore I wanted a device around to have handy in case I needed to test on it.

Which raised for me the question of what to actually get. So far I’ve had experience with Nexus and Samsung devices, neither of which really stood up and said “buy me”. What I ultimately decided upon was a thing that’ll be useful to me not only as a testing device, but also as an ereader and a tablet: a Nook HD. This is the smaller, 7-inch version of B&N’s current tablet, which I wanted because that particular size is more comfortable to me for reading purposes, and also because I’ve got my still-perfectly-delightful iPad covering the larger 10-inch form factor.

It was rather fun going into the B&N at Pacific Place downtown, where I started experimenting with one of the display models, with my srs bznz Testing Face on. The staffer in charge of selling Nooks took a moment to lock in on me–he was busy delivering his “so, are you interested in buying a tablet?” spiel to another customer when I walked in. But it didn’t take him long to get over to me to start the same spiel. At which point I promptly spieled right back at him as to what I wanted the device for (i.e., web page testing as well as reading, and why yes, I AM a current Nook customer), and to his credit, he immediately went into “oh okay this is an informed consumer” mode. So he cheerfully let me be as I gave serious thought between the smoke-colored model and the white one, and whether I wanted 8GB or 16GB. Final verdict: I got the smoke-colored, 16GB one. This is what it looks like.

(Pics and more behind the fold!) 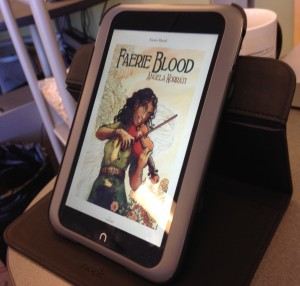 Faerie Blood on the Nook HD

You’ll note that I’ve got it sitting in a foldable stand-type thing. That’s the cover I bought with it, which folds nicely and lets you hook the device into it both in portrait mode and landscape. Here’s what it looks like rotated around into landscape mode. (And for the interested, that’ll be Fairway Solitaire Blast on this screen. More on that in a moment.) 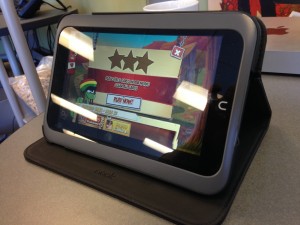 I quite like the stand, which comes in both black and red, and is simple enough of design that I won’t care about the inevitable scuffs and scratches it’ll sustain when I’m carrying it around in my backpack. So if you’re considering one of these devices, consider this as a possible useful cover for it.

Now as to the actual device. This thing’s running a modified version of the Android OS, designed to give you immediate access to your Nook account, and also to encourage you to buy more things via said Nook account if you want. I’m still poking around trying to discern exactly what flavor of modified Android this thing is running–but when I installed its updates, the latest one came down calling itself ‘hummingbird’. This is, I believe, a Cyanogen Android mod. Et voilà: 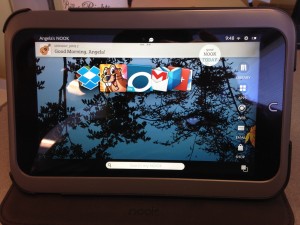 It came with a few default wallpapers you could set on it, and I wound up picking a “Live” wallpaper that’s a simple animation of a pool of water with leaves floating on it. I was dubious about an animated wallpaper, just because I’ve noticed that such a thing on my iPhone makes me motion sick trying to look at it, but I didn’t have that problem here. And apparently there are quite a few apps out there that’ll let you populate the device with additional wallpapers if you want them. This one’ll do me for now though.

The screen’s nice, very clear with good resolution, and I think it’s even clearer than my second-generation iPad. Ditto for the sound, which is very crisp and clear. This makes for a really nice gameplay experience, playing Fairway Solitaire Blast. So if you want to consider this as a possible gameplay device, it may be worth your time.

Reading-wise, as y’all may reasonably conclude, I’m a power reader. I’ve got a lot of Nook ebooks, but I’ve also got quite a few purchased via Kobo and other sources as well. So one of the first things I did when I got this thing home was to install the Kobo app on it as well as the Kindle app, to cover the small set of books I’ve purchased via Amazon as well. It’s kind of lollerskates to have competing vendor apps on this thing–but then, that’s one of the advantages of having a tablet reader that’s running Android on it, even a modified version. You can grab any app you want off of Google Play.

So far what I’ve read on here is actually via the Kobo app, since I used it to finish off reading Mary Robinette Kowal’s third Glamourist Histories book, Without a Summer. This worked pretty much beautifully. I’ve experimented a bit as well with reading stuff directly in my Nook library, and was pleased to see that recent purchases synced very quickly down to the thing mere seconds after I bought them via the B&N website.

Now, I could have sideloaded my non-B&N purchases onto the thing–but I opted to directly install the Kobo app instead so’s to be able to sync across devices. Ditto for the Kindle app. However, I did wind up sideloading all the rest of my library, the stuff bought directly from publishers like Carina or Angry Robot, or from device-agnostic sites like Smashwords. Doing that turned out to require an app called Calibre Companion. This is because I’m a regular user of Calibre, which is a godsend to anybody who needs to manage a large ebook library like mine. I’ve been using this thing to shuffle files down to my Nook touch up to now, and that’s done via USB syncing–but the HD won’t talk to Calibre via USD, so I had to buy the app instead.

The app, however, turned out to be very spiffy. To get it to work, you have to turn on a wireless connection in Calibre on your computer, and then launch the app on the device. Then it’ll go “OH HEY LOOK a connection”, and you can happily sync stuff back and forth. This went amazingly fast, considering that I had to sync several hundred files onto the HD. But now I have those files available as sideloaded files via my main Nook library, including the PDFs, and the device lets me choose how I want to display the various files. I experimentally loaded up Ah shit j’ai pogné le cancer on it, and was quite pleased to see that it rendered the PDF very well–better than the Nook Simpletouch I’ve got, in fact.

The takeaway here: if PDFs are a significant part of your ebook library, and you want to consider a Nook, you may wish to consider a tablet rather than one of the e-ink devices.

So far the only other app I’ve elected to put on this thing is Dropbox, since I want access to the sheet music PDFs for tunes I have parked on my Dropbox account. ‘Cause I never know when I might want to whip out a whistle or a flute and start trying to work on a tune! And see previous commentary re: clarity of rendering PDFs. 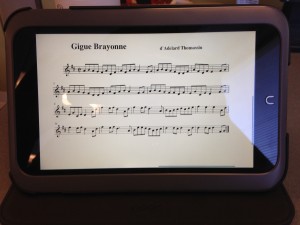 So far the one quibble I’ve got with the thing is that there’s no particular intuitive way to kill running tasks if you need to. My iThings let me do that, and so do the straight-up-vanilla Android devices I test on at work. It took me a few moments of experimenting with tapping on things on the screen before I finally figured out how to get at the queue of running tasks–i.e., by tapping on the double-square icon down in the right-hand corner. That brings up a queue of all the things you’ve recently launched, which looks like this: 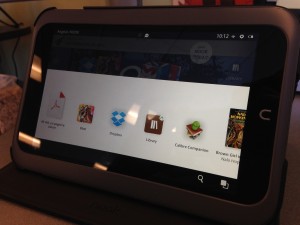 Googling gets me a lot of people installing third-party task managers on these devices, and a lot of other people swearing up and down that Android is supposed to be clever enough to shut down the most idle tasks if it needs to, and that third-party task managers are actually harmful. I don’t have enough info either way on this yet, since I’m still pretty much an Android newbie. Nonetheless, I’ll be keeping an eye on this to see what I get in terms of viable battery life. I’ve so far been able to keep the thing running for several hours without extensive usage–shorter of course if I’m busy playing a game on it.

Conclusion: so far, pretty happy with this thing. It’ll be interesting to see whether it becomes my primary reading device, given that I was starting to find it annoying to have my library scattered between my Nook Simpletouch and my (currently useless, since the battery on it died, but that’s a whole other post) Kobo Mini. I’ll report back with more info as I have it.

Editing to add 7/8/2019: I don’t know if anyone will actually see this change on a five-year-old post, but I was asked by the creator of Calibre Companion if I’d link off to his official site so that anybody who’s interested can find out more information. That site is calibrecompanion.co, and I can also add that while my primary reading is done these days on my Kindle Oasis, I do still have Calibre Companion on my Samsung Nook. And I do still heartily recommend it for Calibre users.

ereadersnooknook hdwhat ereader should I get?
June 2, 2014 by Angela Korra'ti

B&N and Kobo stomping on user ability to download books