YOU GUYS. YOU GUYS.

Dara and I are deep in working with artist Nicole Cardiff on the cover for the forthcoming Warder Soul. And as of tonight, I am delighted to report that BEHOLD! We have a color rough!

This is going to be developed as Nicole adds a lot more depth and nuance to the coloration. But this is now a real good rough idea of what y’all can expect on the cover of this book. Book’s not remotely close to done yet, but having a cover being developed in conjunction with the actual story is exciting, y’all!

And now I give you Christopher MacSimidh! 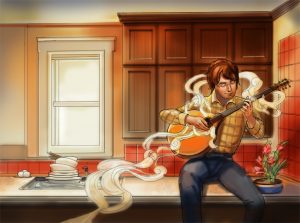