As y’all know, I’m an Apple user of many years at this point. I’m on my second Macbook computer since 2007, and my third iPhone since 2009. And since fairly tech-savvy, I tend to jump on OS upgrades as they happen. This week, with the release of iOS 10, was no exception.

And, as I’ve posted both here and on my social media accounts, by and large I’m happy with it. With the one big glaring exception that the redesigned Music app is an unholy mess and I would now like to shoot it into the sun. Go see that post for details on that, as well as a few initial observations on a couple of alternative apps I am exploring.

This post is about everything else, assorted observations I made through the process of installing the update on my phone and my iPad, and while using it today on the phone on my commute.

I do indeed figure that any OS update that does not result in my device exploding is probably a win.

iOS apparently has two-factor authentication now for logging into your iCloud account. This is a good thing. I approve.

I also noticed that it offered to add the credit card I already had on file with Apple for buying music and such to Apple Pay. I have no fucks to give about Apple Pay but went ahead and let it do this anyway. I may want to test this at some point.

No More Sliding to Unlock

I may be one of the few iOS users on the planet that doesn’t really care about the widgets on the lockscreen. I’m a little sad that “slide to unlock” has become extinct now, because iOS 10 wants you to swipe left to get to widgets, and swipe right to get to the camera. Both of which seem fine to me from a usability standpoint, but I’m tellin’ ya, it’s going to take me a while to get over the muscle memory of needing to swipe left to unlock the phone.

I have an iPhone 6, not a 6s or later, so I don’t get to have the shiny new Raise to Wake functionality. But it is pretty nifty to be able to unlock the phone via Touch ID. Which, come to think of it, I was able to do in iOS 9, I think. I just never ever actually realized that before.

Still, though, this is what it looks like if I swipe left now from my lockscreen. 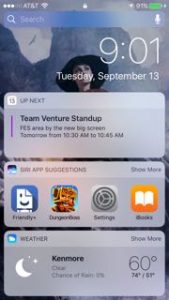 A bunch of font changes all over the place, but aside from the ones in the Music app, so far I’m not seeing anything to annoy me. All of my various apps still look pretty much the same, and none of them appear to have broken. So at least from a design perspective, iOS 10 doesn’t look particularly different from iOS 9 except in the Music app. Nothing here for me to hate, but nothing to get excited over either.

And I’m a little surprised to have found only one new system wallpaper I didn’t recognize. Apparently wallpapers are not something about which iOS 10 concerns itself. I’m a little sad about that, too, because sometimes I do use the system wallpapers. They tend to be a bit better at not making it too hard to read the labels on my apps.

There does appear to have been a noticeable boost in performance on my devices. Uploading a photo to Facebook and Twitter over the house wifi was smokin’ fast, and even pretty speedy over phone connectivity as well.

My Jabra Move headphones seem like they’re connecting faster to the phone now, and during the course of today as I played music and podcasts, they held up pretty well. But they started flaking out on me partway through the afternoon, and I’m not sure yet whether that’s the fault of the new OS, or the fault of the headphones maybe running low on battery. I didn’t hear them fire off a low battery warning, so I’ll have to keep an eye on that over the next few days and see if the problem recurs.

There’s a new filter icon in the Mail app, down in the lower left hand corner, that lets you zoom in on just the unread messages in the mailbox you’re looking at. I don’t know if I’ll find this useful yet, but it seems like something that might be useful to me at some point.

I’m a little vexed that the touted ability to delete the stock apps you don’t find useful is deletion in name only–you can just blow away the icons off the home screen, vs. actually deleting them off the device and therefore freeing up space. But still, I’ll take it. Fewer icons to have to keep track of is nice.

This doesn’t feel like a particularly revolutionary upgrade to me, and the only thing that’s blatantly different amongst the stuff I actually use and care about, i.e., the Music app, is a significant step downward.

I do not care at all about the new emojis, or the added functionality in the messages app. I certainly don’t care about app functionality within messages. And as I mentioned up at the top of this post, I don’t particularly care about the widgets on the lockscreen either. Since I have a 6, I don’t have the 3D Touch capability that’s supposed to be what makes these widgets so awesome. Y’all will have to look to reviews written by people with newer devices than mine, I think, to get more deets on that. (Try Ars Technica’s comprehensive review, maybe?)

On the other hand, my phone’s general performance does feel faster. I’m seriously disgruntled about the Music app being a dumpster fire now, enough that I’m looking for alternative music apps. But that’s not enough to make me sad that I did the update in general. As Ars Technica says in the headline of their review, if you’ve got a reasonably new device, there’s no particular reason not to update.

(If you’ve got an older device, note also that Ars Technica has an entirely separate post about iOS 10 on the iPhone 5 and 5c, so that might be worth a read to you.)

So if you’re a technophile like me and willing to dive in headfirst to a new OS upgrade, go for it; just be aware of the issues with the Music app. If you’re more conservative though and prefer that a new OS release go through a few cycles of bugfixes, there’s nothing hugely groundbreaking here that I see to argue you out of that.

General reminder and FAQ: Still not a romance writer