I installed iOS 10 on my iPhone 6 and iPad Air 2 last night, and I threw off a lot of tweets and posts to Facebook to document various reactions and observations as I went. By and large I’m pretty happy with the upgrade, and I’ll be doing a separate general post about that.

This post, however, is about the unholy mess that the default Music app on iOS has become.

I’ve been cranky about it for some time. I didn’t like that they threw podcasts out into a separate app, but I put up with it. I liked even less that they threw audiobooks out into iBooks, which killed my ability to organize audiobooks in playlists. Why this is relevant: because I buy a bunch of Doctor Who audios from Big Finish, and i like to organize them by season and listen to them in order of release. Dara and I listen to these a lot on road trips. Lack of ability to properly use those playlists on the iPhone is very annoying. I have to keep a separate note active in the Notes app to track the order of the audios in question, on the phone.

But I was even grudgingly willing to put up with that.

As of iOS 9, though, the Music app’s design got deeply annoying. Some of this is because of Apple’s being bound and determined to hook people into the Apple Music service, about which I have zero fucks to give. But at least I can mostly turn the service-specific features off.

What’s more annoying to me, though, is how the app is making it more difficult to just play my music that’s right there on the phone. In iOS 9, they had a toggle button that you had to turn on if you wanted to just see the music on the device.

This is what that looks like on the phone by default. I had to actually turn on the Downloaded Music section, which does NOT appear by default, and scoot that up to the top so that I could actually get to it. 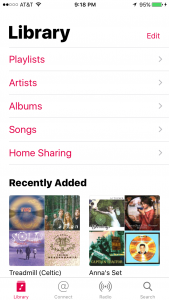 My Library tab in iOS 10 Music

This is a UI decision that makes no goddamn sense to me. I was confused as to why the iOS 9 toggle button wasn’t over in Settings where it belongs, and I’m still confused about that. Since Apple seems bound and determined to make you try to use iTunes Match and Apple Music to play stuff, why they aren’t solving this problem by just putting the “Show Downloaded Music” toggle over in Settings, and keeping from cluttering up the Music app’s UI with redundant sections, is beyond me.

I am also highly disgruntled that they’ve made it a lot more difficult to see how many songs are on any given playlist. I use that data. It’s gone now from the top of a playlist, where it was in iOS 9. Which means that now there’s a bunch of whitespace they’re not using, underneath the playlist title. It looks like this. 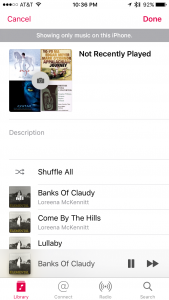 My Not Recently Played playlist is the one I use most often, and it’s often got a lot of songs in it. I like to keep track of how many there are, and now, I have to scroll all the way down to the bottom of it if I want to see the song count. My best guess here is that they kicked up the font size on that data and decided it wouldn’t fit in the whitespace in question. But I don’t even know.

All in all, I’m grumpy enough about the state of the Music app that I’ve decided to start researching what alternative music apps are available. This MacWorld article from 2015 has a few recommendations, and Ecoute and Cesium both look promising. I’ll be checking them out.

Meanwhile, though, if any of you have recommendations for alternative music-playing apps on iOS, I really want to hear from you. I don’t need much in the way of bells and whistles. I just want an app that’ll be able to see my music collection as synced down from iTunes on my computer, and let me get at my playlists properly, including the Smart Playlists like Not Recently Played. I don’t want to stream any music; I don’t care about Apple Music, Spotify, Pandora, or anything else where the point is to stream music online. I just want to play the music I have.

Bonus if the app ALSO lets me play audiobooks in playlists.

Shoot me your recs if you got ’em! And stand by for the full iOS 10 review post.

Editing to add: I found another thing this afternoon that I strenuously dislike about the new Music app. To wit, they’ve removed the ability to see lyrics that you’ve manually attached to a song file. This is hugely irritating to me because a lot of what I listen to being Quebecois trad, I need the lyrics so I can learn them and practice my French.

Also, I have been poking at both Cesium and Ecoute today, the two most promising alternative music apps that I could find browsing around for suggestions.

I want to like Ecoute, in no small part because its name is in fact French. I like its simple, elegant UI. It even seems to let me actually get to the playlists for Big Finish audios like I want to.

But I don’t like that it doesn’t seem to actually honor the toggle setting for only showing me music local to the phone. That being broken means my Not Recently Played playlist is completely freggin’ useless in that app, too. And while it seems like it’ll see my podcasts as well, it’s having trouble organizing them; I see the same podcast splitting out into multiple icons.

Cesium, meanwhile, has a UI that looks like a nice retro throwback to what the iOS default Music app USED to look like. But it doesn’t seem to pick up on my audiobook playlists like Ecoute does. And my Not Recently Played playlist is less useful here, too. I can at least show music local to the phone properly, but Not Recently Played is a smart playlist. My intent with it is to have songs roll off of it when I play them, making the playlist automatically shorter. Cesium doesn’t seem to pick up on this, which makes it less useful in that regard.

And both apps have delivered the vexing surprise that apparently, third party apps can’t get at playlist folders if you’ve made those for organizational purposes, because apparently Apple doesn’t make those visible in the API. BOO.