So this past Thanksgiving, the most awesome and came to stay with us for most of the weekend. Many lovely conversations were had, and much discussion of the forthcoming Plans for Le Vent du Nord, to come this next March. But THAT is a topic for another post. Because this post is about how , knowing my language geekery, showed up with a couple of German-language newspapers and a French-language one for me to play with.

Now me, I’m old enough that I grew up when newspapers in America, actual physical printed newspapers, still meant more than they do now. (And I’m saying this as someone who worked for a newspaper for a few years.) But I’m also young enough that I took hard to the Internet, which to this day remains my primary source of news. So if somebody hands me a newspaper, I tend to make a o.O face at it.

Which is what I initially did at the French and German ones brought–but then I actually opened them up and started discovering things that I could read, which made it significantly more fun!

I already know from my ongoing Trilingual Hobbit Reread that German for the most part remains fairly impenetrable to me, just because I have a lot less active vocabulary in that language than I do in French right now. I haven’t been working on active study of German for as long, and I also don’t have the musical connection like the one Quebecois trad gives me to French. But that said, going through the German papers (Frankfurter Allgemeine and Süddeustche Zeitung), I did at least spot a couple of things I could sort of understand.

Like the word “Zeitung”, for example–which is, of course, newspaper. I also recognized “Wirtschaft” (economy) as a vocabulary word I’ve had pop up in SuperMemo. And it intrigued me considerably to recognize the word “Feuilleton”, because I’ve had that word in SuperMemo as well–but in French. I’ve already noticed a few of my SuperMemo German vocab words looking a lot like French words, and there’s apparently a reason for that. German has apparently slurped quite a few words over from French.

Once I figured out that “Feuilleton” was the cultural/entertainment section of the two German papers, it was easier to find stuff I could actually make sense of. Like this bit here about Monty Python! 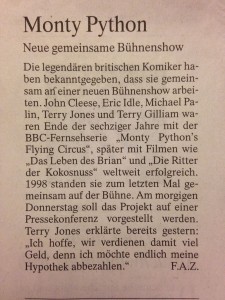 I went looking on the online site for this paper and found this article, which seems to be a longer version of the article in the print copy. I also recognized that a small snippet of an article was about C.S. Lewis and the Chronicles of Narnia. And I was really rather impressed that another article covered the recent story of a kid getting to be “Bat-kid” in San Francisco, covered here in the online edition. 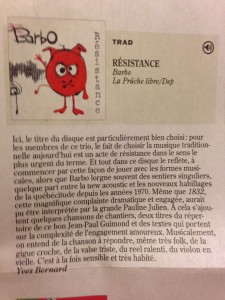 Because, y’know, I have this album, and I quite liked it! Le Devoir’s online article about it, dated the same date as the print edition, is here.

Giggles as well for spotting this, which was the print edition’s version of what was covered online here: 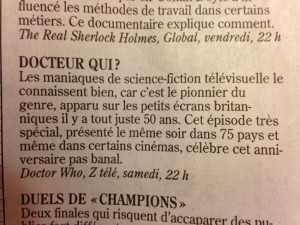 This Looks Pretty Familiar Too

So yeah. Fun! Merci beaucoup, und auch Vielen Dank, to for providing me the linguistic amusement! 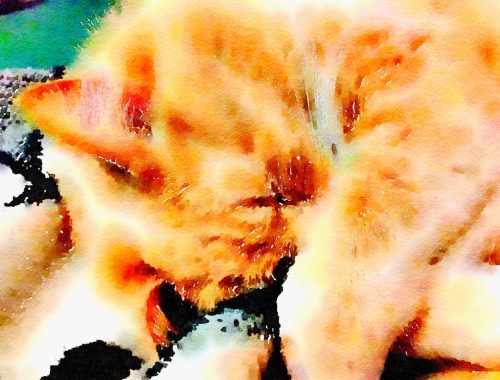