Then we found Mile 0, which is the monument marker for the Trans-Canada highway! We weren’t the only tourists stopping to take pics, either.

Now, that’d been the main reason for our walk. But from there we realized that hey there’s a great big body of water over there, and there’s probably a beach, and we should probably explore it. So we did. Turned out there was quite the impressive stretch of rocky beach to clamber over, too. Lots of interesting variations of rocks shaped by geologic forces, lots of lovely vistas of gray and silver sky and sea. It was rather more rock-climbing than I’d originally planned for, and I was less nimble on the rocks than Dara–but I didn’t fall, and I didn’t slip, and we eventually called a halt before I got too tired and cranky from overexertion. Overall, it was a grand excursion. Both of us, however, were very confused by the Voltron grafitti we saw!

Also, we couldn’t stop singing the “Rocks” song from the fan-produced MST3K episode that riffed all over Star Trek 5. Which, if you’ve actually seen that, is hilarious and will explain immediately to you why we kept singing, “Rocks rocks rocks! My love affair with rocks! Society won’t understand and here comes Mr. Spock!”

More seriously, though, I also thought at the time that whoever the Warder of Victoria is, they have a hell of a beach serving as the boundary of their territory. And they probably get a lot of raw power from the congruence of sea and sky and stone there.

On the way back, going back through the cherry trees, I managed to follow Dara’s example pretty well for once and got me a couple close-up shots of cherry blossoms.

After that we went back to the hotel, to let Dara get her bouzouki so we could head over to the open stage event she wanted to go to. I waited for her in the lobby–at which point, to my surprise, I found fellow Le Vent du Nord fan Ginny was there, apparently to ask about the band, and pursuing rumors of dinner invitations! We exchanged greetings, and Ginny breezed off again, deciding she’d just text to make her arrangements.

At which point, in category “I am NOT STALKING THIS BAND, honest to God, I swear”, I then spotted Olivier Demers. Who’d just come out of the hotel lounge, apparently looking for Ginny! I hailed Olo, told him he’d just missed Ginny, and said something chirpy about having spent the afternoon climbing over rocks at the beach. Then I let the man get back to his drink, ’cause again, honest I swear, not trying to stalk this band here!

I did, however, immediately text Dara amusedly about discovering that the Le Vent boys were staying in our hotel. Because LOL.

Off then to dinner (at the noodle place near our hotel, on the grounds of I needed something soy-based in my system and they had tofu), and from there, we hoofed it quite a few blocks north to a place called Norway House, where the Victoria Folk Music Society has weekly open stage events.

This turned out to be rather folksier than we’d anticipated, but that was okay. They were happy to get Dara get up and play and sing, and Dara even got every in the room singing along with her on her version of “High Barbary”. AND on Paul and Storm’s “Ten-Fingered Johnny”. That’s my girl. <3 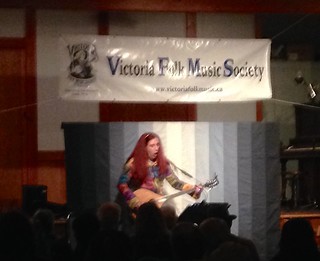