So y’all know how I’ve been talking about going to things like Fiddle Tunes, and the Andre Brunet workshop in Qualicum, and how I’m desperately wanting to go to Camp Violon Trad? And in general kind of being sheepish about it because hi, not a fiddle player?

Well, um, yeah. I might be about to change that.

Because here’s the thing: those wonderful instruction experiences I’ve been having, in which I’ve been able to crash the party and slurp up tunes on my flutes while all the fiddle players are getting tips on technique and such, have been percolating around in my brain. My brain which, I might add, has always been partial to the fiddle. There are reasons Kendis is a fiddle player, after all.

Reasons like how several of my favorite musicians at this point are fiddlers (Bob Hallett of Great Big Sea, Alexander James Adams, the aforementioned Andre, Olivier Demers of Le Vent du Nord, the amazing Lisa Ornstein, Jocelyn Pettit, and of COURSE all the excellent fiddlers in our session group).

Like how some of my very favorite recorded songs in the history of ever are ones where the fiddle just takes me right out at the knees (AJA’s “Faerie Queen” and “Tomorrow We Leave for Battle”, Le Vent du Nord’s “Manteau d’hiver”, De Temps Antan’s “La fee des dents”, and that one sweet piercing moment in the Raiders of the Lost Ark theme over the credits where one long lingering violin chord just shoots right down to my bones).

Like how some of my favorite fictional characters have been violin players. Especially this guy! 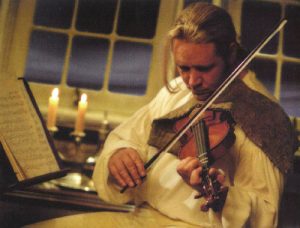 And Kili and Fili from The Hobbit, at least the book! (I am sad, SAD I SAY, that that detail was left out of the movies, but what music we did get in the movies was awesome enough that I forgive them that problem.)

And really, fiddle players are all over the goddamn place in fantasy novels. Any fantasy series that involves bards, you’re going to find fiddle players. Urban fantasy, too. Huff and Lackey and de Lint all come immediately to mind as having books that feature bards in prominent roles–and if the protagonists of certain stories are not themselves fiddlers, then somebody they know WILL be.

But also Sherlock Holmes. And Data is worth an honorable mention even though he was never one of my major favorite Star Trek characters–I AM a Trekkie, so he gets to count!

And all of this has finally exploded in my brain with a huge urge to see if I can actually learn how to make noises on a fiddle myself. I have in fact been moved to rent an instrument, and I have now engaged the aforementioned Lisa Ornstein for at least a couple of initial beginner-level lessons. The plan here is going to be, see if I can get used to the physical mechanics of playing the instrument, with the help of an experienced teacher. And, depending on how that goes, then decide if I want to seriously pursue taking it up as a second melody instrument.

Because yeah, I really need the help of an experienced teacher here. Flutes and whistles, no problem, I can play those! Self-taught on the guitar? ON THAT. Sprinkling of mandolin and bouzouki, sure why not!

But the fiddle is its very own strange and wonderful beast, one that fills me with simultaneous awe and dread. Dara found me the perfect GIF to express what goes through my brain when I think of trying to play one without help.

This is About Right, Yep

Now, though? Now I’ve actually gone to Kenmore Violins (which, as it happened, is run by a gentleman who even lives in our neighborhood), and I’ve rented me a student-grade fiddle.

And I’ve arranged to go see Lisa Ornstein this weekend!

You guys. This is going to be FUN.

All hands: BRACE FOR FIDDLE.