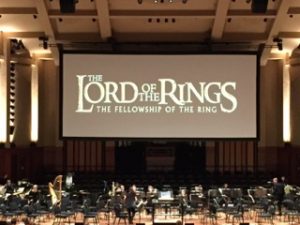 I’ve said before and I’ll say it again: Seattle is a wonderful town to be a nerd. We’re such a bastion of glorious nerdery that even our symphony hall every so often celebrates hallowed icons of nerddom.

Like, say, doing a showing of Fellowship of the Ring while the Seattle Symphony and Chorale do a live performance of the entire musical score.

Dara and I went to this last night, and I’m here to tell you guys, it was glorious.

First, about their showing of the movie. They did the theatrical cut, not the extended, which I have to admit was odd to watch after so many of my viewings over the years since Fellowship‘s release have been of the extended edition. So I did miss a lot of things that I’d come to expect as part of this movie’s experience, such as Frodo and Sam seeing the elves on their way out of the Shire, Aragorn’s singing a bit of the Lay of Luthien, and a lot of the mileage in Lothlorien (notably, Galadriel revealing to Frodo her bearing Nenya, the Ring of Adamant). Ultimately, though, this was the right choice. The theatrical cut is already pretty long, and they did an intermission as well, which added extra time to the already lengthy amount of time required to be at Benaroya for the show.

Also, they ran the movie with subtitles on. This too was the correct choice, since through a good portion of the performance, the music actually came through louder than the dialogue. I initially found this odd and slightly vexing, but I quickly got over it. For one thing, the point of this show was after all to hear the score being performed live. For another thing, it ain’t like I didn’t already know the movie backwards and forwards.

And, as it happened, watching it with the subtitles on actually gave Dara and me a chance to catch stuff we’d never caught before! Because there are a few moments here and there throughout the movie where characters are throwing off incidental little bits of dialogue that are obscured by surrounding action, and it was delightful to be able to finally catch those.

The first of these was when Gandalf shows up at Bag End, and Bilbo’s rambling on about what he can offer Gandalf to eat as he wanders through his pantry and kitchen. The second was also Bilbo, greeting attendees who show up for the birthday party–at which point I actually finally caught that he greeted Fatty Bolger! (Who, of course, is a notable side character at the very beginning of the book, and who is actively involved in the hobbit conspiracy to get Frodo and the Ring safely out of the Shire.) The third is when the hobbits have just fallen down the hill running away from Farmer Maggot, and the focus is on Frodo looking down the road at the imminent arriving Black Rider, while the other hobbits are nattering in the background about the mushrooms they’ve just discovered. The last is also with the hobbits–this time on Weathertop when Aragorn has had them stop to make camp, and Frodo catches the others cooking on a VERY obvious campfire. I finally caught that Pippin complained about Frodo kicking ash onto his tomato. Ha!

So even though this was the theatrical cut of the movie, it did actually give me a chance to find out new things about it. And that was delightful.

But all of this is of course secondary to the whole point of hearing the live performance of the score.

And oh. My. Gods. It was beautiful. Dara and I happened to be at the very back of the main floor–we had two seats immediately to the left of the sound engineer’s console, as it happened. So acoustically speaking, we weren’t in an optimal spot. But even given that, I was left breathless multiple times just by the added depth and dimension of the score. I own the full extended version of the soundtracks of all three of these movies, and I’ve listened to them multiple times. But listening to them on good headphones doesn’t have a patch on listening to a live symphony do it.

In a live setting, I had the distinct pleasure of catching a lot of little nuances and details of various themes, details that are often (like the aforementioned incidental dialogue) obscured by the action of scenes. A notable example of this is during the Council of Elrond, while everyone on screen is arguing about who should take the Ring to Mordor. The orchestra lays down this little storm of metallic, clanging accents that are very evocative of clashing weaponry, and which are an amazing accent to the visual of Frodo staring anxiously at the Ring and seeing a vision of fire playing along its shape. I could not actually see what they were doing to make those noises–they didn’t sound necessarily like just the horn section–but it sounded amazing.

We had not one but two choirs singing for this performance: the Seattle Symphony Chorale, but also the Northwest Boychoir. I am particularly partial to listening to what the Chorale does, given that two friends of mine and Dara’s are chorale members. And I am delighted to say that the chorales performed splendidly. All the women’s voices came through with a clear sweetness for themes during the scenes in Rivendell and Lothlorien, and there were multiple points where they sang where I thought, again, how wonderful it was to get extra depth and dimension to the score. Likewise, when the men all stood up in Moria, I got a lovely thrill of anticipation as I thought oh shit it’s Balrog time.

Specific props as well to these instrumentalists:

And speaking of solos, I have got to mention the solos by the vocalists. Alex Zuniga, boy soprano, had an achingly lovely high range. And soprano Kaitlyn Lusk took several solos–notably, during Rivendell for Arwen and Aragorn’s scenes together, and especially at the end over the credits, when she sang the hell out of “May It Be”. And don’t get me wrong, I love the take of that song as sung by Enya. But Lusk had some extra color to her voice that you don’t normally get out of Enya, and that added a whole new layer of nuance to that song for me.

And with Lusk and Zuniga together doing their solos over the credits, well. Let’s put it this way: usually when I watch this trilogy, it takes Return of the King to get me crying over the credits. This time, I cried for Fellowship. Because after hearing Lusk’s solos during the actual movie, I had a very strong suspicion of what she’d do with “May It Be”, and I even sat forward on my seat in anticipation. She did not disappoint in the slightest.

Also worth noting was the audience reactions to various bits of the performance. Laughter broke out for several of the lighter-hearted bits, such as Merry and Pippin raiding Gandalf’s fireworks. And applause broke out for Aragorn taking down the head Uruk-hai in the final battle, just after Boromir’s death. My favorite audience reaction moment, though, was at the very end when Frodo’s standing there by the water, flashing back to his conversation with Gandalf, and you see his indecision on his face. There was a palpable hush in the hall, just before Frodo determinedly closes his fingers around the Ring and continues forward, with the orchestra gliding in to underscore his resolution. Beautiful.

In short, most expensive movie I’ve ever attended–but worth every penny spent on the tickets. My fellow Tolkien fans, if you’re fortunate enough to live in a town where your symphony can put on a performance like this, go. You’ll be happy you did.

And I will absolutely be attending if the Seattle Symphony decides they’ll also do The Two Towers and Return of the King. Because after this performance, I will live in sweet piercing anticipation of hearing “Into the West” sung in Benaroya Hall.

This past Wednesday's session

Newfoundland tunes hunt for the weekend