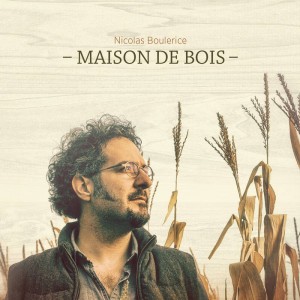 I have written upon many occasions about Le Vent du Nord, and in particular about how every single one of those boys ranks very high on my list of musicians for whom I’ll buy ANYTHING they produce. And I would do this no matter what was on those albums. Olivier Demers accorde son violon? I’d buy that! Quarante-cinq minutes de la basse de Réjean Brunet? Gimme! Simon Beaudry chante dans le douche? Sign me the HELL up.

Given my documented partiality, therefore, it’ll surprise exactly none of you that I jumped all over Nicolas Boulerice’s new solo release, Maison de bois.

If you know Le Vent du Nord, you know that M. Boulerice is the lead singer, hurdy-gurdy player, and piano player. If you’ve seen my prior album and show reviews for this band, you know in particular that he is a master of the hurdy-gurdy, and provoked my Dara into using the phrase “bitchin’ metal hurdy-gurdy solo”. The rich character of his voice and his dynamic hurdy-gurdy playing are a huge part of Le Vent’s overall sound, and therefore a huge part of what cemented my fandom of them in the first place.

It is important to note straight up, though, that you should not expect Maison de bois to sound like a Le Vent du Nord album.

Prior Le Vent releases do hint at what you’ll find on this album, mind you. On Tromper le temps, there’s a track called “Dans les cachots” that gives you a very good preview of the overall flavor of Maison de bois: Nico’s vocals standing on their own, with a stark, emotive aspect to them that a singer of traditional music doesn’t necessarily always have a chance to display, especially if he’s in a band renowned for being upbeat and lively. I’m still enough of a beginner at French that I can’t follow his lyrics without seeing them written out (and I’m not seeing lyrics on Nico’s Bandcamp page, drat), but I can tell you that the songs we get in this release are introspective and thoughtful of tone. I can easily imagine them sung in a smoky nightclub in a noir film.

Instrumentally, we have no hurdy-gurdy here. But we do have plenty of piano, and like the vocals, the piano aims for an overall introspective timbre. Which is not to say it’s understated–because as with the singing, the piano covers a broad range of expression, from quiet, delicate accents to more powerful chords. Other instruments from the backup musicians make appearances as well: some light percussion, a bit of bass, even a nicely muted trumpet on “Avec toi” (which is I think the song that sounded most to me like it should be sung in a smoky nightclub).

The backup vocals are likewise lightly handled. Accustomed as they are to hearing Nico singing with the Le Vent boys, my ears found it a bit odd to hear him harmonizing with a woman–but Mia Lacroix’s voice blended beautifully with his, and so her presence on the album stood out the most for me among the backup musicians in the credits on the Bandcamp page.

Overall, if you’re a Le Vent fan, this album is definitely required listening, just so that you can get a true sense of what Nicolas Boulerice is capable of with his vocals. It’s a refreshing change of pace, albeit one best suited for when you want your music to be moody and quiet. Because as much as I love Le Vent du Nord’s skill at making me want to get up and dance (or play!), sometimes I just want to kick back and listen. And this release has much to reward a thoughtful listener.

Maison du bois is available on Bandcamp. (I will update this post if I find other places you can buy it!)