I meant to write this up several days ago, but between having to get caught up on my backlog of stuff that needed doing while I was gone, then going to Clallam Bay Comicon, and dealing with a bunch of stuff at work, I didn’t have time to do a proper writeup of my first Fiddle Tunes. Let’s now rectify that, shall we?

For those of you who didn’t catch me talking about this on the social networks, and/or who might have missed my earlier posts on the topic, I spent an entire week at the Festival of American Fiddle Tunes workshop at Fort Worden State Park in Port Townsend, WA. Fiddle Tunes, as it’s known, is an immersive music workshop. Despite the name emphasizing the fiddle, it’s not actually exclusively focused on the fiddle–which is good, because as y’all know, I don’t actually play that instrument!

Instead, what drew me there was learning that André Marchand would be on the staff and giving guitar lessons–André Marchand, comma, previously known to me as a veteran of the genre, both in La Bottine Souriante and Les Charbonniers de l’Enfer. I had decided way back in March that I’d be crazypants bonkers to pass up an opportunity to learn from him.

And, bonus: Lisa Ornstein and Normand Miron also were on the staff. Lisa is notable as a non-native-Quebecer who nonetheless has a strong history with the genre, since she’s actually played with La Bottine too. And Normand Miron is also known to me via the Charbonniers. The three of them together perform under the name Le Bruit Court Dans La Ville.

With this kind of a powerhouse trio at my disposal, I wound up having a delightful time attending classes. M. Marchand’s guitar classes were my primary interest, so I made a point of showing up for all of his sessions each morning. Since André was teaching guitar, he brought in a colleague, Kevin Carr, to play the melody line of the various tunes we worked on, so that all the students could get an idea of how to play support for a melody.

André was delightful as a teacher, with a great sense of humor (my favorite quote of his was “play it again, but with more coffee”). The biggest thing I learned from him was reassuring: i.e., that I actually knew a bit more as a guitarist than I’d previously realized. He did interesting things with progressions, adding an extra note in on chords, that I’d sorta kinda already picked up on as a thing but which I did not know how to do.

By progressions, I mean playing a bunch of (say) A chords, only adding in a G on the first, and an F# on the next, so that you get an interesting little almost-melody that can support the actual melody being played. (I’d run into this kind of thing when listening to Great Big Sea playing “Old Black Rum” on the Road Rage live album–I kept wanting to put a little progression I could hear in my head into the choruses, and didn’t know how to properly do that. Now I have a better idea of how to try it!)

Also notable: some of the chords that André threw at us were things I could not actually finger on the General, because my hands were smaller than his. But at least in the case of one chord, a D/F# (that’s a D with an added F#), he showed us a trick to get around this if your hands are small: you wrap your thumb around to your deepest string, the low E, and use that to hold down the string on the second fret to get your F#. NEAT.)

And in one class, they even brought in Dejah Leger for support. 😀 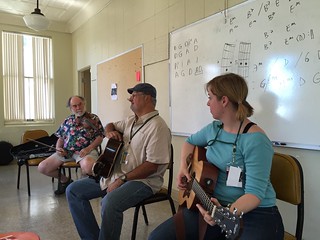 (Dejah turned to me just before she moved forward in the class that day to take a seat beside the two gentlemen, and on the way she hastily whispered at me to get me to take pics. I assured her I totally had her back. Because yeah, if I got to help teach a class with one of my musical heroes, I’d be pestering my nearest buddy to take pics too!)

Speaking of Dejah, I should also totally mention that I sat in on a couple of her guitar tutorials as well. Not all of them, because by mid-week I started running out of steam and had to vanish in the afternoons to go take naps and have downtime away from people. And I had to maintain brain power to be able to try to keep up with Lisa Ornstein’s and Normand Miron’s classes, too.

Lisa Ornstein is a superb teacher. She was great about giving us the background on the tunes she had elected to teach, and about playing through the phrases of a tune until we could play them back at her–a strategy which, I’d already learned courtesy of André Brunet, works well for me. It was in fact reassuring to figure out that I’m not entirely hopeless at learning things by ear. (It’d be nice to be able to do it faster, but I have been working on that, and will continue to do so.)

I’d say I’m sorry to have missed some of her classes–except that Normand Miron was also fun. His English was not as good as André’s or Lisa’s, so he made use of Dejah as an assistant as well. His classes were not as heavily attended as Lisa’s, but still there were several folks who showed up for him as well.

In Dejah’s classes that I made it to, last but definitely not least, I had a chance to play with DADGAD tuning. Dejah is a splendid guitarist, and is very fond of using alternate tunings–so I got to learn a few things with her that I couldn’t with André, since he (as he told us) always plays in standard EADGBE tuning.

What I learned from Dejah about DADGAD is that, at least on the higher-pitched strings, I have an easier time trying to finger-pick than I do in standard tuning. However, I found trying to do that by ear way more challenging than trying to play by ear on my wind instruments–possibly because I’m just not used to using a guitar as a melody instrument at all. This, I think, requires further musical exploration!

All in all, if I hadn’t done anything else at all at Fiddle Tunes, the classes by themselves would have been worth the price of admission. I very, very much got what I was hoping for: i.e., the chance to sit down with professionals, learn some things, and maybe get an idea of the things I need to work on if I want to progress as a musician. I have no aspirations of being anything more than a serious hobbyist–but still, it was hugely valuable and meaningful to just be able to spend time learning from four excellent teachers.

And I brought home plenty of practice material as well! I’ve got recordings from most of the classes I went to. André handed out chord sheets for all the tunes we worked on as well, just about all of which were songs he’s recorded on various albums–and which I happen to have, so I can practice trying to play along with the recordings in question. FUN. 😀

Ditto for Lisa Ornstein’s classes. She made available to all of us who attended her classes various PDFs of the tunes we worked on, so I will have those to play with as well.

And of course, I was focused like a laser on the Quebecois-themed classes. There were dozens of other classes going on as well, and if I had had the time, I totally would have checked out the Irish trad classes, or maybe the ones being held by the musicians from Kentucky. (Because there WERE a couple, and as a born Kentucky girl, I felt kind of sheepish that I didn’t have the chance to go give those guys a listen!) But they advised us early on in the week to not try to do everything, and I took that wisdom to heart. (Note: I was particularly grateful as well that on Monday and Tuesday of the week, they had intro classes for Fiddle Tunes newbies. I found those extremely valuable, especially with the tips about how to try to begin to keep up in a session environment–with some wisdom I’d also learned from Dara, which is to say, I don’t actually need to play all the notes. More on this later!)

And this was only the beginning of the awesomeness of the Fiddle Tunes experience. Next post, I’ll talk about the big organized music efforts in the afternoon: the band labs! 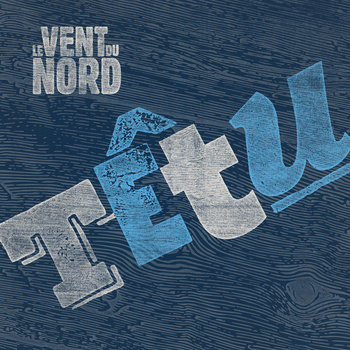