And, finally, the Last Lonely House er, uh, chapter. In which Bilbo visits Rivendell once more, and learns the consequences of wandering off from the Shire for a year when one has greedy relations who’d just LOVE to move into Bag-end!

I find it musically fitting and appropriate that we get musical callbacks in this chapter, when Bilbo and Gandalf stop once more at Rivendell–the elves do another version of the “Tra-la-la-lally” song. I do have that thing stuck in my head with the animated version, and would love to hear a more serious treatment of it, but that’d be hard to pull off. Which is no doubt why we didn’t get one in the movies. I mean, Howard Shore is masterful and has worked miracles of music, but some things not even he can pull off.

Here we also get a passage I’d completely forgotten about:

“It was in this way that he learned where Gandalf had been to; for he overheard the words of the wizard to Elrond. It appeared that Gandalf had been to a great council of the white wizards, masters of lore and good magic; and that they had at last driven the Necromancer from his dark hold in the south of Mirkwood.”

This? This right here? This is pretty much linking right into the entire Necromancer plotline that Jackson’s putting into the movies. I’d totally spaced that this was mentioned in the actual story, and not just in the Appendices. This makes me feel a lot better about that entire plotline in the films.

We get a second song out of the elves as well, another I’d like to hear a decent musical treatment of–something with the joie de vivre I’ve come to love with Quebec or Newfoundland trad. It’d be quite hard to do either of the songs in this chapter without them sounding twee, but after hearing what the movies did with the “Chip the glasses, crack the plates” song, I’d be very happy to hear it. I have to giggle, though, at Bilbo teasing the elves about how their “lullabye would wake a drunken goblin!”

Here we also get a notation that the whole adventure has taken about a year. It doesn’t seem like it, either in book form or in movie form! And I like the passing remark about Bilbo borrowing a red handkerchief from Elrond. I somehow suspect Elrond never got that back.

And we get the “Roads go ever on and on” verses. <3 Spoken by Bilbo rather than sung–but given that we get bits of this sung in the original three movies, oh, it does my heart good to see them here.

And HA! Bilbo coming home to the Shire to find that everybody is auctioning off his stuff! Which we did of course get in the movies, too, including the faceoff with Lobelia Sackville-Baggins.

One has to rather suspect the narrator, who informs us, after relaying how Bilbo lost his reputation amongst his peers, that “I am sorry to say that he did not mind.” Stuffy much, there, narrator? Or perhaps more likely, hiding a bit of wry amusement.

I had forgotten that Balin shows up at the end of this story, and after seeing Balin so beautifully played in the movies, I’m very pleased he gets in a final scene here. It’s a comfort against knowing the poor guy is doomed to die in Moira. *sniff* And I really rather wish we could have gotten this scene in the final movie, even though the callback to the other trilogy was nice too.

The last two paragraphs, I think, sum up beautifully how Bilbo has finished his character progression and is now very happy indeed:

“Surely you don’t disbelieve the prophecies, because you had a hand in bringing them about yourself? You don’t really suppose, do you, that all your adventures and escapes were managed by mere luck, just for your sole benefit? You are a very fine person, Mr. Baggins, and I am very fond of you; but you are only quite a little fellow in a wide world after all!”

“Thank goodness!” said Bilbo laughing, and handed him the tobacco-jar.”

The chapter title here is a straight translation of “The Last Stage”: “Le dernière étape”.

And once again we see that the translator of this edition did a straight translation of songs without trying to make them rhyme. But I do rather like the chorus in French, even if it doesn’t rhyme: “Venez! Tra-la-la-lally! Revenez à la vallée!”

In the part where Gandalf is telling his tales in Rivendell, I note that “disait” is used rather than “dit”–for “Gandalf was saying”, rather than “Gandalf said”.

And hah, on the second song, I very much like this line, the translation of “Dance all ye joyful, now dance all together!”:

It totally makes me want to hear the elves singing this Quebec-style, with call and response and everything. But yeah, not exactly suited for a lullabye. And also, seriously, does Rivendell have a song patrol stationed in the trees, or what?

When Bilbo and Gandalf find the troll hoard they’d hidden and Bilbo tries to turn down taking any more treasure, Gandalf tells him in the French edition, “Mais partageons en frères!” (“But let us share as brothers!”) Interesting translation when the English reads “But share and share alike!”

This chapter teaches me a thing! I.e., that the word “feu”, which I normally know as the noun meaning “fire”, can also mean “late”–as in “deceased”. This comes up in the description of the auction of “les effets de feu Bilbo Baggins”, “the effects of the late Bilbo Baggins”.

In the description of Bilbo’s things being sold for anywhere from “next to nothing to old songs”, the French renders this as “presque rien à une bouchée de pain”, which is “almost nothing to a mouthful of bread”. Reverso.net says “une bouchée de pain” is an idiom that essentially means “a pittance” or “next to nothing”… which does make this whole phrase kind of redundant, I think!

“There and Back Again: A Hobbit’s Holiday” becomes, in French, “Revenu de loin, vacances d’un hobbit”. The first bit is “Returned from afar”, I think.

Bilbo’s noticing that Balin’s beard is several inches longer gives me the word “pouce” for “inch”, which I hadn’t known either! I knew “pouce” as “thumb”!

And we end with Gandalf and Bilbo:

Yeah, this is a lovely ending in French, too.

The first sentence of the German edition of this chapter gives us: “Gerade am ersten Mai kamen sie zurück an den Rand des Tales von Rivendell”. Note in particular the word “Tales”, which is “valley”, and not “tale” as it might look to an English speaker’s eye. Note also that as near as I can tell, “Tales” is singular here and not plural, due to its position in the sentence.

All that said, it’s kind of amusing to think of the edge of the tales of Rivendell, too. Which The Hobbit and The Lord of the Rings kind of are.

Aw! The first of the two songs, the reprise of “Tra-la-la-lally”, does not appear in the German. Presumably because the translator didn’t want to tackle it.

The second song, however, does appear in the chapter. And as with prior songs in the German edition, it does indeed appear to have been rearranged to actually scan in German. So the second verse of the song looks like this:

I translate this as:

Dance, friends, all dance and close the circle
The grass flutters like velvet, like wind in the branches
The silver river carries the shadow of the willows
as the finest web of shimmering silk.

I’m guessing at the first line, mind you–“schließet”, I think, is from the verb “schließen”, but I’m not a hundred percent sure of that. I also found “Reigen” on reverso.net being defined as a round/roundalay (in the dance sense), so I’m guessing there too. Any German speakers who can clarify this for me, please do!

At any rate, this is another example of the German text actually being a bit more poetic than the English, I think!

“Einen betrunkenen Ork”, on the other hand, is just so very delightfully German in rhythm. It is, of course, “a drunken orc/goblin”.

“Roads go ever ever on” becomes “Wege wandern weit und lang”, and there’s poetry there, too. Bilbo’s little recitation is not skipped by the translator, happily.

When Bilbo arrives to find the auction of his stuff in progress, he lets out with this rather tasty word: “Kreuzschwerenot!” I’m coming up blank on a proper translation for it. Any German speakers reading this familiar with this word?

The metaphor about selling things “for a song” doesn’t show up in the German text, as near as I can tell; the closest it gets appears to be the word “spottbillig”, which means “dirt-cheap”. Although, reverso.net does mention “for a song” as part of the definition of this word, too. So the German translation seems to pack the idea into a single word.

Ah, and here’s the reference to the Sackville-Bagginses–or, as the German text calls them, the Sackheim-Beutlins!

Here’s my favorite word in the German version of the chapter: “verschwenderischen”, which means “wasteful”, and which is used in the passage describing how Bilbo spends most of his gold and silver on presents.

And one last picture. Now that Bilbo is home again, after spending this entire adventure complaining about how he wished he was home again in the Shire, I have to giggle that he’s still got on his hat. Like he’s ready to leap up and head out again. 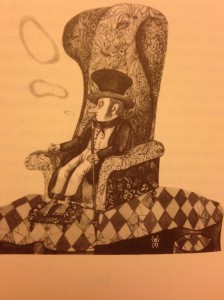 We’re all with you, Bilbo!

Thus concludes the Tri-lingual Hobbit Reread. This has been a great pleasure even if it’s taken me a lot longer to finish the series than I intended!