My pace on this has, unsurprisingly, slowed now that I’m back at work! But I think a chapter a weekend will do me for a while. Here then is chapter 3!

General things about this chapter:

I’d forgotten that Rivendell was nicknamed The Last Homely House, which, as I recall, doesn’t come up in The Lord of the Rings at all. Certainly in modern usage, “homely” is not an adjective one would normally think of in connection to Rivendell, especially not if one has become imprinted with how gorgeous Rivendell looks in the movies. Even with Tolkien’s usage, “homely” still isn’t quite a word that comes to mind, at least with movie!Rivendell, which is so gorgeous that one doesn’t necessarily think of it in the context of “this is a comfortable and cozy place”.

I’d forgotten about the “here down in the valley” song, too, which is way, way more cheerful an introduction to Rivendell than we get in The Lord of the Rings, that’s for sure.

Elrond comes across in The Hobbit way more like “a man who happens to have both elven and human ancestry” as opposed to “an actual elf”–which is a big contrast to his presentation in The Lord of the Rings, or in The Silmarillion, for that matter! It’s not till you jump over to The Silmarillion that it’s really made clear that Elrond is in fact half-elven, which I think makes his elf blood a little more immediate than “ancestry”. Yet The Hobbit calls him “an elf-friend”.

Stuff in the French edition:

Right out of the gate in Chapter 3 in Bilbo Le Hobbit, I started noticing a construction I’ve seen in various Quebecois lyrics: -la. In the text, it specifically shows up in the phrase “ce jour-là”, which means “that day”. I’ve seen it repeatedly in Le Vent du Nord and Les Charbonniers de l’Enfer lyrics, though!

And yet another thing that I was almost able to translate on sight, thanks to a Le Vent du Nord song: “Il n’avait jamais rien vu d’aussi grand”, “He had never seen anything so grand”. Compare to “Je jamais rien vu d’ si beau”, “I never saw anything so beautiful”, which is the chorus of “Cre-mardi”!

Elrond’s naming of the swords is not quite as awesome in French as it is in English or German. Orcrist and Glamdring come straight across the language barrier untouched, but “Goblin-cleaver” and “Foe-hammer” are not translated as names. They are “le fendoir à gobelins” and “le marteau à ennemis”, respectively. Which essentially translate to “the cleaver of goblins” and “the hammer of enemies”, so close enough.

Stuff in the German edition:

First excellent German word found in this chapter: “moosgrünen”! Which actually means “moss green”, not “moose green”, even though now I cannot help but think of green moose.

Whoa, the German translator totally changed the “here down in the valley” song for this edition! Here’s the first verse of the German version, which is significantly different than the English:

Also, it must be said that the first illustration in this edition that includes elves is kind of hilarious, since it has these slender figures floating in trees, and tiny Bilbo is down on his white pony with a very WTF-ish sort of look on his face.

Elrond’s naming of the swords is cooler in German, I think. The swords’ names render as “Orkrist, der Orkspalter” and “Glamdring, der Feindhammer”. Which I think could only have been cooler if they’d been single gigantic German words! 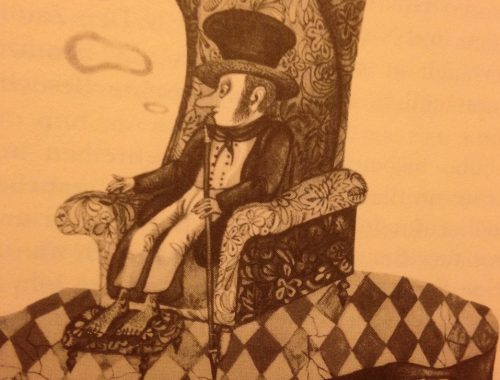