Now that I’m back from my latest trip to Canada (which went splendidly and the obligatory concert report is on the way), just wanted to get out a quick update on the status of print copies of Faerie Blood and Bone Walker.

I am down to a scant two copies of Faerie Blood, after selling quite a few at Conflikt, and I’ve just sold the latest one today to one of my Kickstarter backers in St. John’s. (HI EMMA!) One of the others is already spoken for for giveaway purposes (more on this in a minute), and that leaves me one that is not currently spoken for.

So if anybody wants that last copy of Faerie Blood, now would be a good time to jump over to the merch page for it on Bandcamp and order it! Because once it’s gone, that’ll be it for a bit until I get my next print run in. Alternately, go to the Buying From Me page for instructions on how to order it from me directly if you don’t want to go through Bandcamp.

And speaking of print editions: I have a big ol’ shiny new box of Bone Walker! This is the rest of the first print run, a good number of which will be heading out to Kickstarter backers over the next couple of weeks, as well as other folks who have paid me for a copy (HI OLO). One of these will also be reserved for giveaway purposes, and I’ll be handing out a couple via a Goodreads giveaway as well.

But that’ll leave me a whole bunch of other copies that will be available for purchase, even before my next convention–which’ll be Norwescon. So if you want a print copy of this book, you can order that from Bandcamp too, here. Or, again, go look at the Buying From Me page for other options.

BEHOLD THE SHINY! Who wants one? 😀 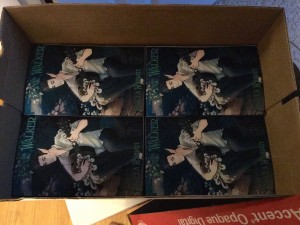 Now about that first giveaway I mentioned! Long-time friend and supporter of my work David has asked my and Dara’s permission to do a giveaway of both books and the soundtrack on his blog. That giveaway is in progress right over here, so if you’d like to throw your hat into the ring, click on over there and check out his post! Note that he will also be handing out digital copies of both books as a second prize.

All you have to do is drop him a comment telling him why you’d like to be the winner. Creativity and cleverness count!

He’ll be running this giveaway until March 8th, so you have a bit of time. I’ll be issuing periodic reminders until the giveaway is done! So clickie!

Stand by for further updates re: the Goodreads giveaway I’ll be setting up. AND! One more thing about that new box of books I’ve got–I’ve got a few extras that turned out to be misprints, with slightly screwed up covers. Third Place gave me those as extras since they can’t use them, so I can give them to interested parties as review copies.

So if you’re willing to commit to writing a review of the book on Amazon and/or Goodreads, talk to me and I can set you up with a copy!

I’ll have two, count ’em, two Boosting the Signal posts coming this week so stand by for those on Friday! One will be from fellow Carina author Caitlin Sinead, and another will be from an author that’s new to me, Sharon Black–but who caught my interest querying me about her romantic comedy set at a newspaper. Check back with me on Friday for those posts! And stand by for next week’s Boosting the Signal for another Carina author, T.D. Wilson, and his latest SF release!