Getting to Cumberland turned out to be quite easy and pretty much involved about three hours’ worth of north, with the accompaniment of the sweet dulcet tones of the special live Welcome to Night Vale episode “Condos”, and then some more full-cast Doctor Who audio adventure from Big Finish. Cumberland isn’t quite small enough to fit into the category of “blink and you’ll miss it”, but that said, it’s still a very tiny community. Downtown Cumberland is pretty much one straight street with a few offshoots, and as we quickly discovered, the venue where Le Vent du Nord would be playing was quite tiny and cozy indeed.

Our gracious hostesses put us comfortably up in their guest room, and most of the rest of our first day there went to quietly hanging out–and then going to the aforementioned venue for dinner and impromptu music, since Dara carried her bouzouki over there. We wound up actually doing a jam, since we got asked to play! Which was pretty awesome.

Unsurprisingly, I quickly found the show poster for les gars, too! 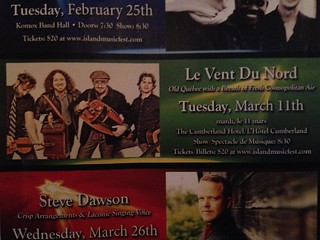 And the first half of the next day, which was Tuesday the 11th, we spent some time exploring Cumberland’s immediate environs. We found a memorial!

And we had a long and lovely walk through the woods near the town. Which were still rather snow-filled, which intellectually did not surprise me–but still I wasn’t prepared for a hike through a few inches of snow. We were out quite a while, but happily, we spent the correct amount of time to not wear me out. Particularly since I needed to pace myself and save energy for the musical shenanigans to come! It was a lovely wood, though! And our gracious hostesses reassured us that the signs warning MOTHER BEAR AND CUBS IN THE AREA were at least six years out of date. And the signs saying “3 KM UP” and “3 KM DOWN”, inexplicably funny at first glance, turned out to be related to checkpoints along the trail as I recall.

As we came out of the woods we found memorial spots pertaining to the Chinatown that used to be in the area, too.

We worked up quite the appetite on that walk, and had some brunch at a local cafe. Which, to my distinct pleasure, had hot chocolate laced with Sortilège on the menu! And I am kicking myself that I did not actually have it with Sortilège, ONLY because it was too early in the afternoon for booze and I expected to be drinking at the show that night. (I’m tellin’ ya though, Internets, that was a hard call.)

Back at the abode of our gracious hostesses, we actually spotted Simon Beaudry out the window next door. We did not, however, bother him! We did, however, cheerfully go out back on the porch where I twiddled a few tunes on one of my flutes and got clapped at from a couple of guys at the garage across the way. Dara and I wound up hanging out playing our instruments to kill time before the show, which was a splendid way to spend the rest of the afternoon.

Did I mention there were flags? Cumberland was, we noted with pleasure, flying a rainbow flag as well as the ones for BC and Canada. And our hostesses had Cascadia’s own tree flag up. All we were missing was a flag for Quebec!

But then, we were going to get plenty of Quebecois goodness later that night. More on that, O Internets, with my final post of this series–the Le Vent du Nord show at the Cumberland Hotel!

General reminder and FAQ: Still not a romance writer

General reminders: How to buy my books