And now, O Internets, the second to last post of my Victoria and Cumberland vacation series–in which Dara, , , and I all had the supreme pleasure of getting to see Le Vent du Nord play at the Cumberland Hotel!

It’s truly fitting that we wound up the trip with one hell of a gig out of les gars. Because don’t get me wrong, you guys–I enjoyed the symphony show immensely, but even after only four shows’ worth of experience, I’m here to tell you that the best way to enjoy Le Vent du Nord is in a tiny, cozy venue. Preferably front row center. With a MAMMOTH.

Because, of course, I DID break out Jean-Claude for this show, to make up for his not being at the symphony show! 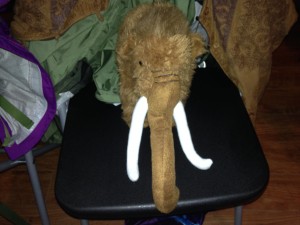 Ready for the Show

Specifically, I left Jean-Claude on a seat on the front row by the tiny stage, once I got permission to reserve seats for me and Dara. and wanted to stay back at a table, so we sat with them at a table long enough to get dinner. For Dara and me, that turned out to be poutine, of course.

Let it be noted, O Internets, that the Cumberland Hotel PUTS BACON IN THEIR POUTINE. Dara and I both were hard-pressed to not faceplant right into our bowls. Because I MEAN DAMN.

And that was all for the best, because it didn’t take the Le Vent du Nord boys long to find us! Nicolas swung by our table first, at which point I chirped, “NICO! I haven’t seen you in HOURS AND HOURS!” That got a big grin out of him, and I then promptly introduced our gracious hostesses to him.

Then Olivier found us! To my glee, Olo asked after the mammoth, because the good M. Demers had noticed I hadn’t had him at the symphony! I explained that I hadn’t wanted to bring Jean-Claude on a rainy night. Me: “Have you SMELLED wet mammoth?” Olo: “You are too gentle with him!”

So that was all giggleworthy, and once Dara and I put down some cider and poutine, we scampered to our seats up front for the show. This place was super-tiny, people, even tinier than Hermann’s in Victoria. Dara and I were close enough to the stage that the boys were practically in our laps, and I had to try to figure out exactly what kind of angles I could use to get pictures. Which of course also meant that I was in an excellent position to appreciate the fine stomping feet of M. Demers as well as his fiddle mastery, because they opened up the first set with “Manteau d’hiver”.

“Le souhait” was next, letting Réjean get his shot at singing lead early. And one of my better shots of him, looking like he’s focused VERY HARD on making sure his accordion doesn’t explode. 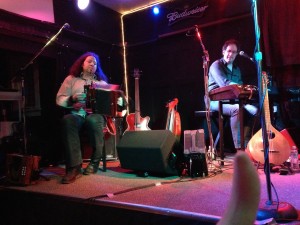 Playing in the Key of BOOM

Simon took over next for “Toujour amants”, one of his livelier songs from Tromper le temps, about which I have done much prior enthusing! This was one of the points during the show at which I had trouble with angles. Which is why this photo looks like there’s a standee of Simon on the stage. He was actually three-dimensional, I swear! However, the blurred state of Olivier’s feet is pretty much the natural way they appear on camera. And in person. The man does wear rocket-powered shoes. 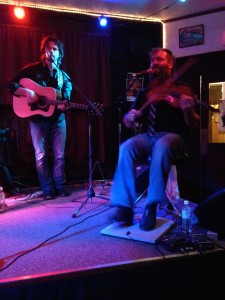 I Swear Simon Was 3D in This Song

Next up was “Le dragon de Chimay”, with the obligatory intro of how they came to write that song. This time around, though, they threw in a new joke about how they weren’t even going to TRY to pronounce the name of the volcano in Iceland, so they were just going to call it Johnny. (Me, looking at “Eyjafjallajökull”, I can’t help but think they have a point!)

Then Nico took us into the trilogy of heart-themed numbers: “Le cœur de ma mère”, “Le cœur en trois”, and “Le retour du fils soldat”. And I believe it was during one of the first two of these, possibly the instrumental set, when I got this one of Olivier! 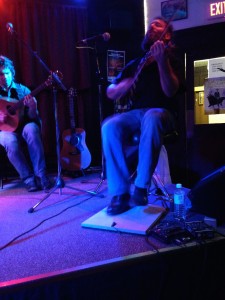 And as for “Le retour du fils soldat”, that powerhouse of four-part harmony, well. See previous commentary re: my proximity to the stage. If I’d been any closer, they’d have been in my lap! 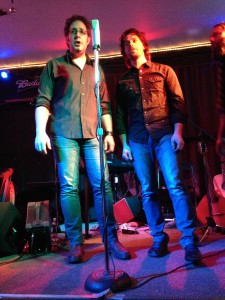 “Lettre à Durham” was next, and that too got the obligatory lengthy intro. Here, too, we got a couple jokes I hadn’t heard the boys make before–wherein Nico, deadpan, inquired of the audience, “You heard about Quebec?” And they also made a crack about how “before the British, Quebec was very warm!”

“Durham” is also where Le Vent suddenly becomes a quintet! Their sound guy François jumps on the bass so Réjean can play accordion, adding in yet another layer of ways these guys sound like a much bigger band than they actually are. And I could make a Gatchaman/G-Force joke here, “always five acting as one”, except I’m not sure if Science Ninja Team Gatchaman ever aired in Quebec. 😉 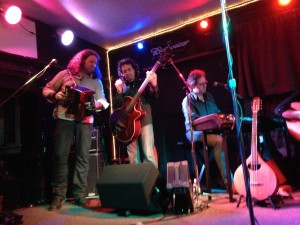 BUT WAIT Who’s Running the Sound?

The first set closed with “Octobre 1837”, which is French for “Anna’s going to sit back and be in awe of those wild descending runs Olivier can do on the fiddle”.

This is the same Olivier, mind you, who then promptly caught me sneaking a pic of Jean-Claude on the steps of the stage during the set break. He grabbed the mammoth, set him down on his tapping board on the stage, posed his feet on either side, and beckoned for me to snap a pic! 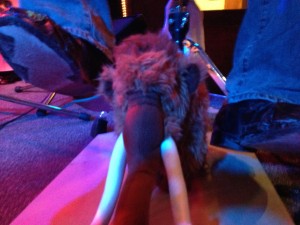 Anyway, onward into the second set!

We opened with “Mamzelle Kennedy”, the bouzouki-heavy instrumental set from the La part du feu album. Always fun! Then we went into what I’ve come to think of as Nicolas’ Hurdy Gurdy 101 spiel, the lead-in to “Les amants du Saint-Laurent”. There were new jokes here, too! Nico cracked a joke about how his hurdy-gurdy is not to be confused with what an organ grinder plays, and then added that “I have three monkeys!” Cue Simon miming being a monkey. Cue me blinking and giggling in my seat, because whoa Simon are you actually being funny? Awesome!

Also, when Nico got to the bit where he offered to open up the hurdy-gurdy to show the audience the inside, this time he informed us wryly that this was “your first naked hurdy-gurdy!” Cue the obligatory oOOOOooOOoo from the audience.

Then: “Rossignolet”. About which I have raved many a time before. This time around was no exception. Though this time, I got a nice pic of Réjean in the middle of bowing his bass! 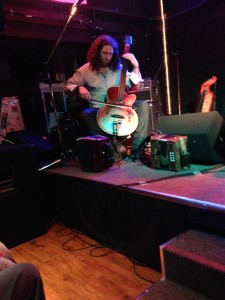 “Adieu Marie”, another of Simon’s lead songs from Tromper le temps, was another “Anna has to lean back in her chair to get an angle for the picture” sort of song! 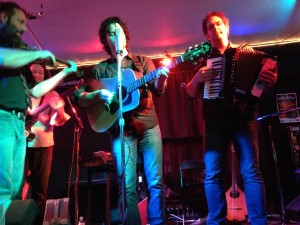 My last real opportunity for pictures was the final instrumental: “La soirée du hockey”! In the intro for which Olo said right out how he was pissed (and he did use that word) at the cancellation of the Francophone broadcast for Hockey Night. But hey, it got a hell of a set out of him, so I can’t be too sad! And at this particular gig, it let me get actual photographic evidence of Simon Beaudry smiling on stage. 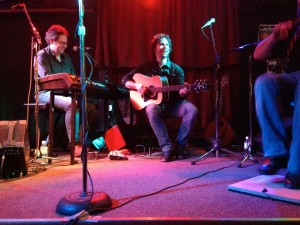 My Word! He Actually Can Smile!

(I better not tease Simon too much about this, though. He might STOP.)

Speaking of whom, Simon took back the lead for “Lanlaire”, then! And I’d give you pictures for that except I was too damn busy singing back the responses, and being amused at how the boys were grading the enthusiasm of our volume against other shows’ audiences. On the first try we didn’t even match up with the symphony audience, which was pretty sad. But we got louder and more enthusiastic as the song went on!

No pics for “Au bord de la fontaine”, either. Because by then Nico got us on our feet, and this song? THIS ONE I know. \m/ There wasn’t any room to dance between our seats and the stage, but there was definitely room for bouncing!

There was one encore–Réjean taking back the lead for his other song, “La piastre des États”, and then of course “Écris-moi”. And one last up close shot for me! 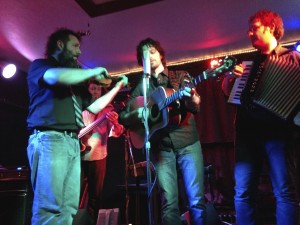 Once the show officially wound down we got in a round of getting to chat with all the boys, too!

Dara asked Réjean about how he bowed his bass, and he explained to us that he actually doesn’t like how that works because of the structure of the neck on his instrument–he can only do two of the strings! And I had a bit of a giggle with Réjean as well, trying to give him a hug and the air-kiss-on-the-cheeks–which, now that I’ve actually, y’know, looked it up and stuff, I know is called la bise–except I screwed it up, aiming more for Réjean’s ear than his cheek! So he made me do it again. *^_^*;;

Dara also geeked a bit at Simon about the bouzouki and about how she’s been experimenting with Esus2 tuning. We got a bit of “quoi?” on Simon’s face, I think, but at least he seemed pleased we were trying to geek out about the bouzouki. ‘Cause, y’know, we actually know what one is.

Chatting with Nico took the turn of his explaining to me and Dara and about how they were going to have to leave for Victoria that very night, get in a couple hours of sleep, and then jump on a plane to go to their next gig in Alberta! Because welcome to the lives of touring musicians, folks. expressed her sympathies by exclaiming “tabarnouche”, at which point I shook my head and said, “Nah, that goes straight up to tabarnak!”

I also told Nico Dara and I were amusedly trying to decide what instrument Jean-Claude would play, and how it was clear mammoths would have problems playing the hurdy-gurdy. Because of tusks, you know. And I also levelled that same remark to Olivier, who had opinions on the matter.

“He does the feet,” Olivier informed me quite firmly, and then even added, entirely deadpan, “He told me.”

“Oh, you speak mammoth?” I winged back at him. “I didn’t know that about you!” The things you learn when you converse with fiddle players.

So then we finally made our merry way out into the night, with one final farewell to Réjean and François who’d ducked out of the building for a smoke–we passed them on the sidewalk, and wryly noted we were just going next door to where we were staying. All in all a beautiful evening, and a great show, with a bunch of awesome musicians. I don’t know when and where I’ll get to see Le Vent perform again, but I gotta say, chances are high my crossing the border into BC for their shows is going to become a yearly tradition!

Next, my last post about the vacation: Dara and me coming home!