This being the writeup + photos post for what Dara and I did in Victoria earlier this month, on Saturday the 5th! Aside from going to see Le Vent du Nord, that is, which of course I covered already. 😀

The previous post of this set, for Friday the 5th, is here!

Saturday, or at least the morning and afternoon, was allocated to walking around the immediate area and checking stuff out. We hit a place called Mo:le for brunch, which turned out to be super, super tasty; all hail for the recommendation! We managed to get in at the ideal time, i.e., just before their lunch rush. We snagged a table up close to the door, and, amusingly, right next to us on a ledge were a bunch of kids’ menus and crayons. The crayons we noted specifically because they weren’t Crayola. You can kinda see the crayons in question in the mammoth pic below. Anybody know what brand they are? 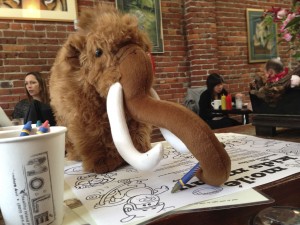 And after that, we went on a circuit of as many book and music stores as we could reasonably hit in the space of a few hours. There are a ridiculous number of bookstores in downtown Victoria, and that was awesome. I particularly liked going into a couple of them and chirping “Hi, so do you have any books in French?” I wound up getting the first three Harry Potter books in French from Munro Books, and the Lord of the Rings trilogy from Shepherd Books. At the latter place, we had a delightful conversation with the guy at the counter about translated works. And while I didn’t actually wind up buying anything from them, I was quite impressed by Russell Books as well. I swear, walking into that place felt almost like walking into Powells, even though Russell occupied less actual space. It still occupied quite a bit of space, and it was delightful. 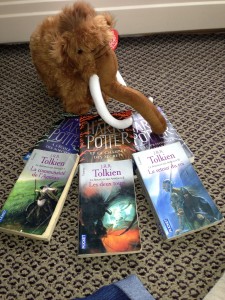 At the same time, though, we also spent time at two different music stores. Classic Guitars, which was in dangerous fun proximity to the aforementioned Russell Books, tempted me with the temptation of a lovely little Walden classical that I might have seriously considered taking home if I’d thought I could get it home safely. We also had generally lovely music-geeky conversation with the guy at the counter in there, too.

Once we set foot in Guitars Plus, though, I was doomed. Because they had an adorable little 3/4th-size mini dreadnought. I strummed that little guy and he went BUY ME. And I went WELL SHIT I GUESS I’M TAKING YOU HOME! I elected to call it my YAY I HAVE A BOOK COMING OUT present. 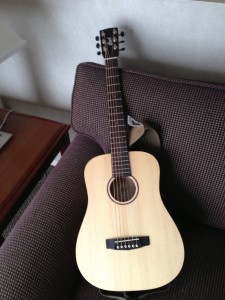 It must be noted as well that Fort Street was pretty much the street with Almost All of the Really Awesome Shops. (I say almost because Munro’s was over on Government.) In addition to the book and guitar stores, we also found an excellent chocolatier: Chocolat, where we enjoyed some truly excellent truffles. And also took a chance to do another mammoth pic, since Dara and I had got into yet another store, one with games and toys and stuff, and picked up a couple of cheap tin whistles! 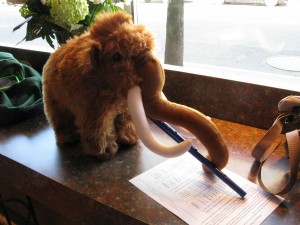 We wandered a bit into Chinatown as well, which stood out for me mostly due to some amazing mural work on some of the buildings. 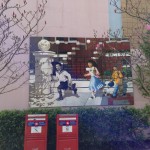 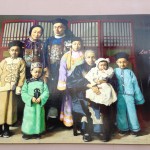 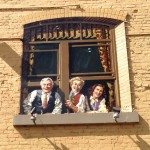 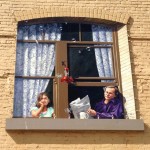 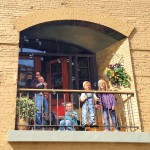 And we ventured a bit out onto a nearby bridge, just to see what was over there. I didn’t get any pics of the bridge because I just didn’t think to take ’em, though Dara probably has a bunch. I did however get a few pics of General Downtown Victoria Goodness, just because the day was beautiful for the most part. We got hit with a brief rainshower later on in the afternoon, which drove us to seek shelter in the mall in the immediate area–Bay Centre. Nice mall and its layout quite reminded Dara of the bigger ones we’d seen in Yokohama in Japan. But in general, we did get lots of sunny beauty. 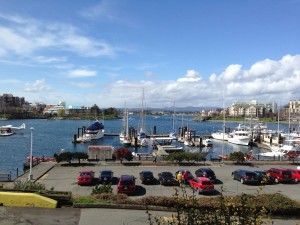 Boats and Sun and Water and Stuff

And we did notice that the poster effort in some places had gone to color. ;D 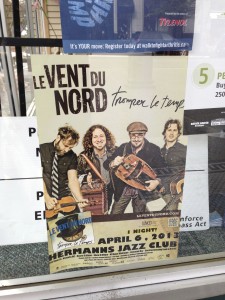 These Guys STILL Look Like They’re Up to Something

We spotted this building later in the afternoon walk, after the weather had turned a bit blustery. Still, I really liked the juxtaposition of the trees with the ocean-and-orca-themed mural on the building. 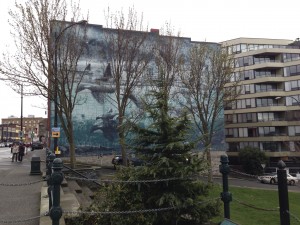 Swimming Behind the Trees

Coming back towards the hotel, we went by this one sunken-courtyard-type place, and the view into that was pretty neat. I kept expecting Jareth to show up in the various alcoves, and I heard David Bowie singing in my head at the sight of it. 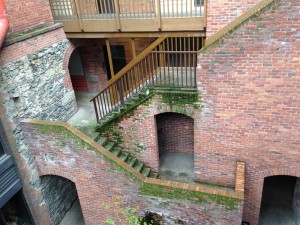 It’s Only Forever Not Long At All

And we found yet another nice mural next to a shop specializing in selling Irish-type clothes and souvenirs. 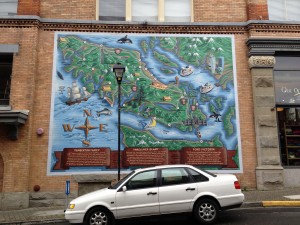 Once we got back to the hotel we did have a little time to kill, so we got a few shots of the view off our balcony, too! We could not, unfortunately, see the venue we were going to from our balcony. I looked. 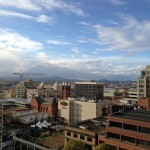 HI VICTORIA! I see you! 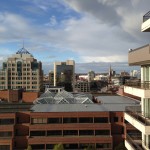 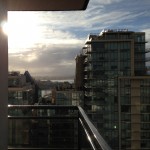 This of course went to Le Vent du Nord, and yeah, already covered that part. 😀

Medical update on me and Dara both