I already went on at considerable length about the general awesomeness of seeing Le Vent du Nord perform at Hermann’s Jazz Club. And of course, y’all also know about my newly christened mammoth!

But I’ve been reminded that I did not in fact give you a proper writeup of the weekend as a whole. And it’s worth talking about that, just because Dara and I never had been to Victoria before, and Victoria in general was absolutely worth the visit.

So behold, my recounting of my and Dara’s Victoria Adventure! This post’s going to focus on what we did on Friday the 5th, with as many pictures as look decent enough to share. I’ll do other posts for the non-Le-Vent portion of Saturday the 6th, and for Sunday the 7th!

Getting up to Victoria to begin with did require us to get up at stupid-o’clock (“Words are HARD,” Dara lamented, to which I replied, “That’s why it’s called stupid-o’clock!”) in order to make the 8am ferry. Which meant in turn that we needed to show up after 7am at the terminal, which in turn meant we needed to be on the bus down from Kenmore by 6:30, which meant pretty much ‘get up around 5 in the morning’. And nobody likes getting up at 5am.

Dara also said at the time: “I refuse to believe this is an actual time of day!” And yet, there were actual Other People on the bus when we headed downtown with our stuff, people who, presumably, had things to do. There were still customs involved, of course, since we were going to Canada–though honestly, getting onto the ferry was way less obnoxious than it was getting onto the plane.

And the ferry itself was a bit of a surprise. Dara and I had been on ferries before, but they were ones oriented around moving cars as well as people, so there was a lot more space to get up and wander around. The Victoria Clippers by contrast are purely passenger ferries, so a lot more of the space is taken up by seats and there’s less room to pop out on the deck and see stuff. But on the whole the trip wound up being pleasant despite this, since we had lovely conversation with the older folks who were sharing our particular table.

Once we actually showed up in Victoria there was a customs line to go through there, since we had a checked bag to claim. And that did take a while. But again, thankfully, not obnoxious. And once we cleared the line, we were able to venture out into downtown Victoria. Which was, in a word, beautiful.

The Clipper terminal is right on the Inner Harbour, and so we were in sight of pretty much everything. We had a short walk over to our hotel, which was pleasant indeed. All the sidewalks were wide and eminently walkable, and just walking along the water in general was lovely. Plus we cut through a delightful little park on the way to our hotel, even as we took note of things like the BC Royal Museum and the Parliament building as we passed them. 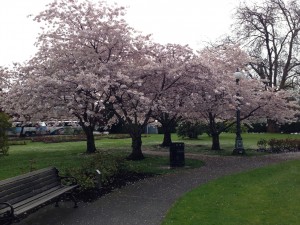 Cherry Blossoms in the Park

Our hotel was the Chateau Victoria, and it was awesome. Pricy, but awesome! We got a junior suite that was seriously bigger than some small one-bedroom apartments we’ve seen, with a full queen-sized bed in its own room, a proper kitchen/dining area, and a proper tiny living room. Since we were up on the 15th floor, we had a lovely view from our tiny balcony as well. But we didn’t get to see any of that on our immediate arrival, though, since we showed up early enough that our room wasn’t ready yet.

I liked the fountain in front of the hotel, and there was a statue at the fountain that I swear to gods looked lifelike enough that I kept thinking it was just a guy sitting there. 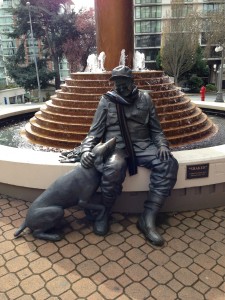 So we left our luggage with the concierge, and wandered off again to do a couple of errands and also find lunch. It was at this point that we started seeing that someone had placed flyers for the Le Vent concert all over the place, which was great! Naturally I had to immediately post a pic of this to Facebook, and since I sorta, um, kinda do actually have all four members of Le Vent Friended there, tagging was required. Which got me amusing commentary from other fans who found the pictures, some of which was in French, and I particularly cracked up at one guy’s crack about whether there was a chance it could be a police poster. I told him the hurdy-gurdy player TOTALLY looked like he was up to something. 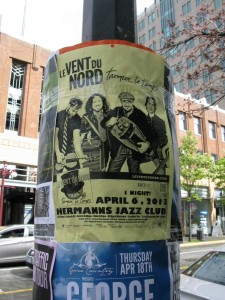 These Guys Look Familiar, and Possibly Up to Mischief

And we eventually went to lunch at a place the hotel front desk recommended, Milestone, right on the water. Nice place, though clearly there to cater to tourists. 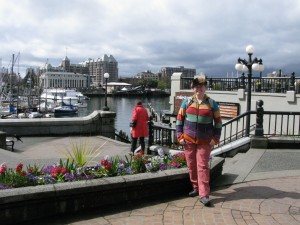 Anna by the Restaurant

There was a nifty First Nations sculpture right down by the water, which we stopped to take a look at. 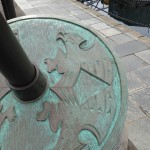 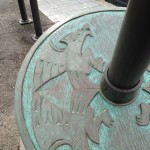 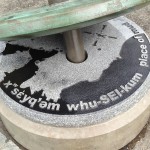 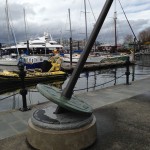 We were told to come back by 3pm, and since we still had time to kill after lunch, we went over to the Royal BC Museum. I had been advised that there was mammothy goodness. I had been advised CORRECTLY. They had the mammoth all by itself in an open area on the Natural History floor, and JESUS GOD it was huge. The only problem I had with its presentation was that it was entirely by itself where it was on display, with nothing around it to give you a sense of scale as to exactly how big it was. 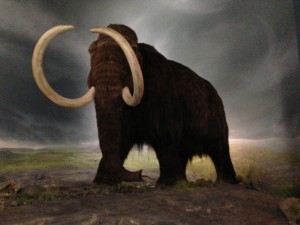 We barely scratched the surface of that museum, though; other than the mammoth, we wandered around through the Natural History area and that was about it, aside from getting the toy mammoth from the gift shop as well as some maple candies. There was plenty more there and we didn’t do the place justice at all. But on the other hand, by the time 3pm rolled around, we were very tired and in need of naps. So we adjourned back to the hotel to finally claim our room and then get a little downtime.

Once we got up again from our naps, Friday evening went pretty much to finding an open mic for Dara to play at! We’d googled for Friday night open mics in Victoria, and wound up finding one at the Cornerstone Cafe in Fernwood. It took us a bit to actually walk over to the place, and it didn’t help that I overshot where we were headed on our walk, but we eventually made it there okay. Fernwood turned out to be the groovy hippy district, from what we could see of it, and the cafe was neat. Plus, the general caliber of the open mic performers was very, very high. Everybody could sing, everybody could play, and it was quite enjoyable just listening to all of them.

Dara’s throat was still a bit thrashed from having fought off something a few days before, so she really only had about a song and a half in her. Which was a bit of a problem, given that everybody in the lineup was allowed three songs. But she made it through two songs anyway, and went over very well, well enough that the cafe regulars told us they weren’t going to let us go home. And that Dara reminded them of a female version of somebody named Stewart. Clearly, we’re going to have to go back to this open mic again and find this Stewart guy! 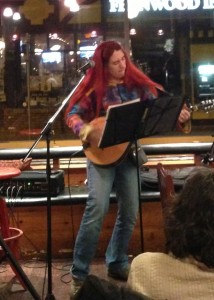 She Who is About to Rock Salutes You

Walking to and from the cafe, even given me having gotten us temporarily off track, was very nice. Our hotel had offered us shuttle services, which we declined–since Dara and I both are of the opinion that in order to get to know a city, you need to walk it. (There are reasons I have “a Warder walks her city” as Millicent’s credo in the Free Court books.) And we had a perfectly lovely amble back to the hotel after the open mic was done.

We miss you already, Fernwood! I mean, you even had a BUBBLE CROSSING SIGN. (We were told this was because a local guy was renowned for setting up his bubble machine quite frequently.) How awesome is this? 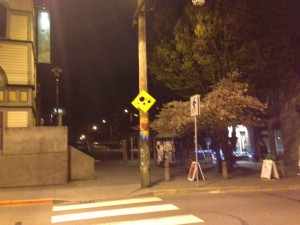 In which Anna has something to say about breast cancer