Polls are now OPEN! What should I name my mammoth?

As you all know, O Internets, I had massive huge fun going to see Le Vent du Nord in Victoria! But almost as awesome was the acquisition of a toy mammoth, who proved to be my and Dara’s constant companion through the whole weekend. The mammoth’s adventures are documented right over here in a publicly viewable album on Facebook! 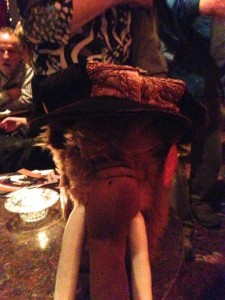 All the Cool Mammoths Wear Hats

But of course the mammoth needs a name. And a great number of creative suggestions were lobbed my way!

My belovedest of Daras pointed out quite correctly that I should not force binary gender expectations onto my mammoth and that the mammoth may in fact be genderqueer. Therefore I quite happily accepted names that would be associated with any gender. And now it’s time to pick one! Do not let the obvious masculinity or feminity of any given name distract you from whether it is in fact appropriate for the mammoth. Genderqueer Mammoth is legion and contains multitudes!

I particularly liked the general theme of “hugely complicated and/or dignified names” as well as a strong contention that Genderqueer Mammoth may also in fact be Quebecois. And two different people came up with ‘Mamut’, with or without an associated first name, and which I am given to understand means ‘playboy’. Given that Genderqueer Mammoth got snogged on the way out of the Le Vent concert, the individuals who proposed those options may be onto something. >:D

Choose up to three on the list, or propose one of your own in the comments! And if you’re seeing this post on LJ or Dreamwidth, please click over to the angelahighland.com link since the poll doesn’t carry over to the mirror sites.

I will give a copy of Valor of the Healer to a randomly selected commenter who makes a case for their choice in the comments–so to have a shot at the book, you must not only vote, you must also campaign for your choice as well! You have until Valor‘s release day, one week from tonight, to jump in on the poll!

ETA 4-13-2013: AND! Just to make things a little bit more lively, Internets, I will ALSO offer a copy of Valor of the Healer to whoever has the winning choice on the poll! Consider this incentive to campaign for your selection! Vote! Vote like the wind! And get your friends to vote too! 😉

What should Anna name her Genderqueer Mammoth?

I have a cunning plan