Kiri just shot me a rough draft of the color version of the cover! 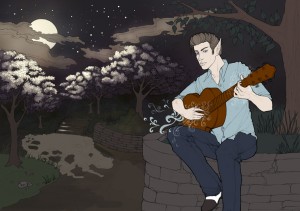 General notes, especially for those of you who haven’t read Faerie Blood yet:

Kiri informs me that these colors are rough background colors and will be enhanced as she starts adding in shadings and highlights. I’ve told her to favor blue and black for Elessir, especially with that guitar he’s playing. Very, VERY much looking forward to seeing the final product!

Wow, there sure are a lot of books here