ETA 6/19/2013: Hi, everybody who keeps hitting this post from search engines! Gracious, there are a lot of you. I’ve been seeing this post get something like 8-10 hits a day for a while now. So y’all say hi, won’t you? If there’s anything I don’t talk about in this post that you’d like to know about, or anything you’d like me to post about in a future post series on how to read ebooks, drop a comment and let me know!

Third Place Books, my indie bookstore of choice, has joined up with a bunch of other US indie bookstores to sell Kobo ereaders. And since Third Place currently has the Mini on sale for Valentine’s Day, I decided to scarf one and play around with it. This is partly an experiment to see whether I want to commit to making Kobo (and through them, Third Place) my primary ebook source, but it’s also general geeky interest in comparing ereaders. The Nook so far has been my only e-ink device I’ve had firsthand access to; I was quite interested in playing around with another one, just so that I can speak with at least a little more authority on what the various devices are like.

My first impression on pulling this thing out of the box is ZOMG tiny. It’s even smaller than the Nook and lighter as well. Weight-wise, it even feels lighter than my iPhone 5, though that may change once I find a cover for it. 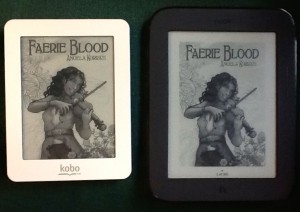 Kobo and Nook Side by Side

Setup was super-easy. All I had to do was plug the thing into my computer with the provided USB cord, point a browser at kobosetup.com, and download their desktop app. Then, running the desktop app, I had to log in with my Kobo account.

It promptly began syncing up with my existing Kobo library, pulling down my small number of purchases as well as a great number of samples I’d added. I noticed though that the Help button down at the bottom was cut off, and there didn’t seem to be a way to resize the window to make that button completely visible. (Hi, I’m a QA tester, I notice these things!) 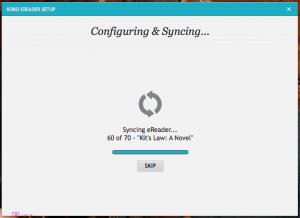 But what if I want to click on Help?

The Kobo Help says this thing talks epub AND PDF, so I tried sideloading a PDF onto it as well as an epub. That worked just fine. I suspect though that this device would have the same issue that the Nook does with a PDF–i.e., that even if the device can read a PDF, depending on how it’s formatted, it may or may not look nice on the screen. The PDF I tried came through with the text showing up really tiny.

And, as I poke around Kobo’s Help, I see that you cannot in fact change the text size of a PDF on this thing the same way you can on a Nook. You CAN use a two-finger double-tap gesture to zoom in on the text–but then, the text is too big for the page to fit on the screen at once, and you have to drag the page around to see everything. This is a sub-optimal reading experience, so I’d have to say that when it comes to reading PDFs, the Nook wins slightly. (But I’d still not recommend reading PDFs on either device.)

Comparing Faerie Blood on both devices, Dara and I find that the Kobo renders the cover ever so slightly more smoothly. I’m also seeing that the Kobo device is a bit weirder about rendering the centering of the title page–it looks good on the Nook but a bit weird on the Kobo.

Response time seems to be slightly better on the Kobo but not enough to really notice. So far I’m liking the page transitions a bit better, though. Not as much obvious screen flash, and you can adjust the settings as to how often it does a full screen refresh. Right now mine’s set to the max of every six pages.

You can make custom shelves on the Kobo, like you can on the Nook. I note with pleasure that the shelf functionality on the Kobo includes the ability to let you search for specific titles or authors or keywords, when adding books to a shelf. This is extremely helpful if you don’t want to have to page through dozens of pages of books, as you would have to do in a library as large as mine.

I also note that if you kick over into the mode that shows a list of books rather than the cover grid, the books will show whether they are Read or Unread. COOL. I don’t see a way to make a shelf of books that are Read or Unread, but if there’s a way to do that, that would be awesome.

I notice that if you connect the device to your computer via USB, you have to remember to tap the Connect button on the screen before the computer acknowledges its presence. That’s an extra step to take that you don’t have to do on the Nook.

And hmm. As I add more books to the device, the response time slows down a bit. So yeah, it’s pretty much neck and neck with the Nook.

I’m seeing some screwiness in metadata on the Kobo that I don’t see on the Nook–some titles coming through in all caps, and one or two books that came down off my Kobo library that don’t have a known author shown. But that, I think, is a question of the store not being quite as thorough with its metadata as the B&N store is.

Overall though my impression of this device is positive. I’d say it’s a decent competitor with the Nook SimpleTouch, if you’re in the market for an e-ink device.

Anybody have any specific questions about either that you’d like to me to clarify, let me know! I’ll be happy to post updates in the comments or in future posts.

ETA: Ooh, this is an important thing to note. The Kobo Mini talks more file formats than the Nook does. To wit, it understands mobi, txt, html, xhtml, and rtf. VERY good to know.

kobo mininookwhat ereader should I get?
February 10, 2013 by Angela Korra'ti 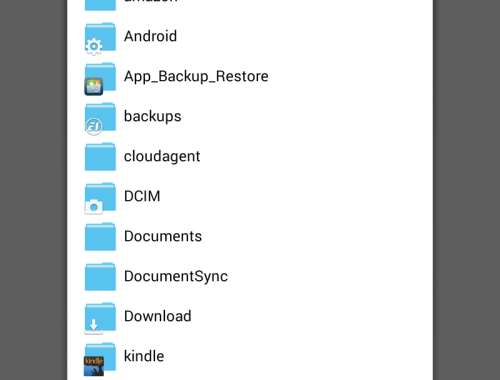