I keep seeing a lot of people hitting this post, so for the benefit of those of you who’re coming by to see what I had to say about the two devices, I wanted to note a couple of things that I saw about the Mini since I made that post.

One: I have a really big ebook collection, and when I tried to put my Kobo books (of which I have about sixty or so) as well as all my books purchased from other sources (e.g., Carina Press) onto the device, it slowed down considerably. Enough that it became kind of unusable.

Workaround for this: I’ve since shifted to using the Mini to read stuff I buy from my Kobo account, and putting everything else on my more powerful Nook SimpleTouch.

Two: The Mini does not have an SD slot in it. So if like me you have a really big ebook collection, you may wish to keep this in mind. You may want to be looking at one of the more powerful Kobo devices instead, like the Glo or the Arc, if you want to have a Kobo device.

Workaround: Same as above, really. Minimizing the number of books I have on the device helps. Also, I’m using the Mini’s archiving ability to immediately archive a book as soon as I’m done reading it, so as to clear it off the device.

Three: I noticed periodic frustrating weirdness with the Mini losing track of what book I was reading, and/or how far along I was in it. I suspect this was buggy behavior in its autosyncing up to Kobo’s servers.

Workaround: Unless you absolutely need it, turn off the device’s wi-fi. I saw this problem go away as soon as I did that. The drawback here is that I do have to remember to plug the thing into my computer’s USB port to keep it synced, and I can’t really autosync from it over to, say, the desktop app or the app on my phone. But I don’t find that to be a problem.

kobo miniwhat ereader should I get?
June 20, 2013 by Angela Korra'ti 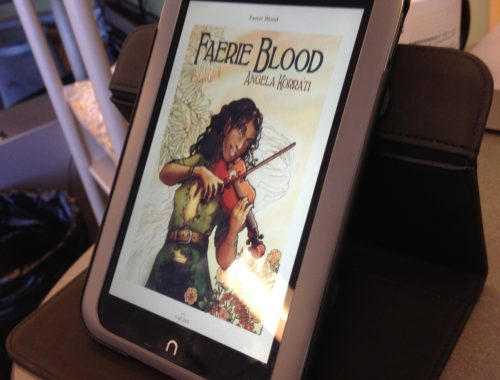 How to read ebooks, Part 3: Touchscreen vs. e-ink