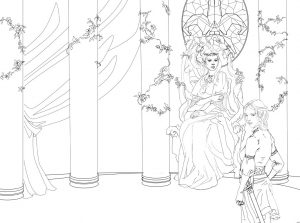 Adding a fifth story to Walk the Wards

Point of interest: I have decided to add a fifth story to the Walk the Wards book, a Kendis short I’d been playing with as a concept back before I wrote Bone Walker… and which I think now does deserve a place in this book.

Part of the reason for this is to just add a bit more length to it, to make it comparable to my other releases in word count. But part of it is also that with both a Jude story and a Kendis story in this thing, I can more legitimately call it book 2.5 of the Free Court series.

This Kendis short will be called “Diminuendo”, and is likely to be novelette-length, or maybe short story, don’t know yet, still working on it. As to what this story is about–it’ll be set between Bone Walker and Warder Soul, and will be the story of why Kendis is going to have a change of cats between those two books. More than that I will not say, because spoilers.

Relatedly, I can also report that all the other pieces in this book do in fact now have their own titles. Most of them I mentioned in this post, and to those I will add that Jude’s story is now called The Light Beyond the Gate.

Let it also be noted that Elizabeth’s, Oscar’s, and of course Caitlin’s stories are all also set in present day. Caitlin’s story is set very shortly after Faerie Blood, just long enough after that book that Christopher’s family in St. John’s have gotten the word as to what happened to him.

Let it be further noted that I’ll be reaching out to the same artist who’s done the cover for Warder Soul to do the cover for this release, too–as soon as I decide what I actually want on the cover. 😉

As of last night I’ve topped 34,000 total words written on this collection, and I’ve written about 6,000 words so far on this month’s Camp Nanowrimo effort. I continue to be hopeful about making decent progress this month!

I am chagrined that I may be one of the longest-running people ever to try to finish up Kickstarter rewards owed, but I promise, folks, I’m still working on those novellas. Or, rather, working on them again, given how challenging it’s been to pull any words out of my brain at all this year.

It has however become clear to me that before I can legitimately work on Warder Soul, book 3 of The Free Court of Seattle, I really need to finish the novellas first–in no small part because one of those stories introduces Caitlin and Gabien, who will be important supporting characters in Warder Soul. And I need those characters clearly settled in my mind before they join Team Kendis.

So I’m trying to buckle down and get these novellas done and dealt with. I’d actually started trying to do this last month, instituting my usual strategy of “by god I need to get at least some words into Scrivener” when the words won’t come: setting a stupidly low goal. That’s helped.

But more effort is needed–and so this month I’m participating in Camp Nanowrimo.

This is run by the same folks who do the main Nanowrimo event every November, but it’s a bit more relaxed and groovy in that you can set whatever writing goal you want. So if 50,000 words is too daunting, you can go lower.

I’ve set my goal to be getting 25,000 more words into the novellas. And so far at least I can report that the stories as a collective whole have now topped 30,000 words.

A Power in the Blood is finished–that’s the story about my psychic chick of size who helps a Warder find out who killed his sister. So this effort will be focused on:

The Deepest Breath of Song: A painfully shy young man in a tiny coast town learns there are strange creatures indeed in the nearby ocean–and the town’s Warder needs his help to protect them.

The Plight of the Warder’s Daughter: Caitlin Hallett, daughter of the Warder of St. John’s, wants her chance to see the world before she must commit her powers to protecting a city. But her father Thomas is ill, and there’s no one else in the family powerful enough to take over from him, so he won’t let Caitlin go. When another young member of the Warder lineage comes to St. John’s, Caitlin must choose between seizing the same chance Gabien Desroches has taken–and her love for her city and her father.

As of yet untitled: The story of what happened to Jude when she went to Faerie with Melisanda ana’Sharran, during the events of Bone Walker!

So more on this work as events warrant, y’all. And if any of my fellow writers out there are doing the Camp Nanowrimo thing, let me know, hey?

As I’ve been lamenting a bit on social media lately, this year has, creatively speaking, blown so many donkeys that I’m pretty sure there isn’t a single unsatisfied donkey between here and Spokane.

But Dara having been working so hard on her Overwatch fic as of late (a fic which, by the way, you should read, because it’s totally awesome and you can find it here) has been a prod to my own ability to write, I think. So I’ve been lately instituting my strategy of “ridiculously stupidly low daily word counts”, just for the sake of being able to say I’ve written something.

I’ve also returned to dealing with my still-due novellas for the Warder universe, in no small part because I’ve realized that I really need to write Caitlin Hallett and Gabien Desroches’ meeting before I can really have them appear properly in Warder Soul.

So I’m back in dealing with their story. And hey, here’s an excerpt! Caitlin’s coming out of a very spiky conversation with her father Thomas, a conversation which has not gone well. Caitlin’s looking to console herself by busking on George Street.

Except she’s got a surprise waiting for her. Muahaha.

Excerpt behind the fold!