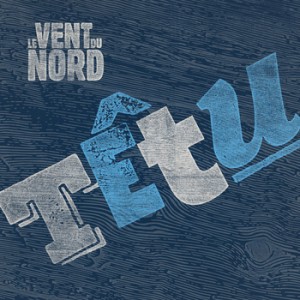 There are certain phrases that hold massive magical power with me, people. “Great Big Sea is coming to town”, for one. “Let’s go out for sushi”, for another. “I just read and loved your latest book,” that one’s a contender. My favorite over the last couple of years, though, is hands down “a new album by Le Vent du Nord”. Têtu is album number eight for mes gars, and the sixth one with the lineup of Nicolas Boulerice, Olivier Demers, Simon Beaudry, and Réjean Brunet (counting four studio albums, the live album Mesdames et messieurs, and my beloved Symphonique)!

You may take it as read at this point that yeah, I’m going to adore anything these boys do. That goes without saying, since I’ve spent a whole lot of energy here on my blog and on social media not being able to shut up about them. But when they drop a new album, I get to actually back up my fangirling with evidence. I get to talk about not only adoring the music of this band, but why I adore it, too. And despite this post I made earlier today, I do not really have the French vocabulary yet to talk properly about this album. So I’m going to do it in English.

Overall picoreview first! This is the longest Le Vent album yet, with a total of 15 tracks, and there’s a whole lot to love with each one. After all the time these boys have spent playing together, they’ve pretty much got this down to an art and a science, and it shows here. Têtu is a tight, expert production, one in which the joy of the music shines through on every note. If you’re a fan of this band, you’re going to relish this album. If you’re not a fan yet, I submit for consideration that this would be an excellent album to use as your first introduction to them. Instrumentally and vocally, les gars are at the top of their game. And there are particularly high quantities of Simon Beaudry singing lead on things, and that’s always a good thing.

And now, track by track commentary behind the fold!