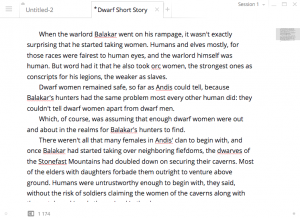 This week I got email from a gentleman telling me he’s a community manager for a piece of software called Write!, which he talked up to me as a distraction-free text editor. He said he was looking for writers and/or bloggers to review the program or at least mention it on their websites, and offered a free license to try the program out.

Now, as y’all know I’m a big fan of Scrivener, which will continue to be my go-to tool for dealing with larger projects. On the other hand, if I want to write something short (say, the extremely rare short story), I sometimes feel that Scrivener’s actually a bit too complex a tool for that. Sometimes I just want to whip something out in a text editor and not have to worry about a lot of bells and whistles.

And hey, since the guy was offering a free license, I took him up on the offer. So here’s a post reviewing Write!, possibly the first of a few, just because I’m going to do this right and go over it in depth just to see what I’m dealing with here.