For the longest time, I’ve been reading ebooks on my last purchased Nook, a Samsung Galaxy S2 tablet, with a side helping of periodically reading on my iPad or iPhone. But this has been bugging me for a while, for a few reasons.

One: I’m getting older, and my eyes are getting weaker. Which has made me want to go easier on them. Given this, I thought it’d be nicer to shift my digital reading back to an e-ink device rather than on devices with much brighter screens.

Two: These days I want to be less distracted by my technology. But I still love ebooks, and I’ve missed my prior experience of reading on e-ink devices. Which is to say: devices whose entire reason for existence is to do one thing, show me whatever I want to read. They can’t distract me with Facebook or Twitter or games or email or whatever. There’s something very restful in that.

Three: The ongoing slow decline of Barnes and Noble has made me disenchanted with the idea of ever buying an ebook from them again. Never mind a new device.

Four: While most of my ebook purchases these days are from Kobo, I haven’t liked reading on the Kobo device I own, a Kobo Mini. I like how tiny it is. But I don’t like that if I load it up with even a reasonable fraction of my library, its performance slows down considerably.

And while Kobo has higher-end e-ink devices, those are hard to come by in the States. There have been reports of Kobo beginning a partnership with Walmart to sell ebook cards and devices here. But as I flat out refuse to set foot in a Walmart, buying a Kobo device from them isn’t on the table.

I could go up to Vancouver and get a Kobo there. But that distance also means that if the thing breaks, there isn’t an easy way for me to see about getting it repaired or replaced.

All of which led me to do something I hadn’t ever foreseen myself doing: purchasing an e-ink Kindle. Specifically, an Oasis.

What the hell, Anna? Why Amazon?

I’ve had my share of objections to Amazon over the years, absolutely. Just about all of those objections are still in play. I don’t like their proprietary DRM. I don’t like the tough choice that so many indie authors have to make between “publish exclusively with Amazon if I want a prayer at actually making any money on my sales” vs. “publish wide, but at the risk of my visibility, and only selling to people who actually know me”.

And there are rafts of commentary to be made about Amazon’s business models in general stomping all over local businesses in general and the publishing industry in particular.

All that said: Amazon, for all its faults, is still local to Seattle. So I was able to set foot in an Amazon store, play around with an Oasis, ask an actual staffer questions, and buy it shortly thereafter. I know also from prior experience that it’s super easy to return something to Amazon if I’m unhappy with it, and that their customer service for tech issues is pretty good, too.

Moreover, I’m quite comfortable with Calibre. I know how to convert ebooks from one format to another, and how to use Calibre to manage my ebook library. I figured, just because I might own an Amazon device doesn’t mean that the majority of the books I put on it have to come from Amazon.

But what really sold me on the decision was the Oasis itself.

Because I mean damn, this thing is shiny

For a couple weeks I was legitimately torn between getting an Oasis, and waiting until my next trip to Canada, when I could consider getting a Kobo Aura. Once I actually saw the Oasis in person, though, I was totally impressed.

The odd lopsided design is kind of amazing. The spine along the side, where the battery and the page-turn buttons live, rests very easily in my palm. Hitting the page-turn buttons with my thumb is very easy and comfortable. The weight and shape of it is the closest I’ve ever experienced to holding a print book in my life. It’s stunning. 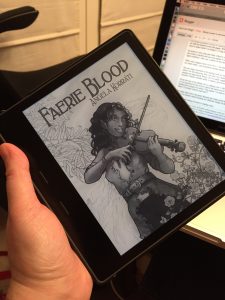 Kendis on the Oasis

Plus, the screen is very crisp and easy on my eyes. Since it’s an e-ink device, it still periodically flashes the screen on page-turns, but it’s minimized that. So I don’t even notice when that happens now.

Likewise, the screen is backlit. This is particularly helpful for me when reading in commute conditions, like on a dimly lit bus on the way home during the winter, when it’s dark. I can adjust the strength of the light, and have it react to the ambient light around me, too.

Last but definitely not least, this thing is water resistant. This was arguably the most important selling point for me. Most of my reading is done on my commutes, and as y’all know, commutes in the PNW can be quite rainy.

I also, however, read a lot in the bath. And I find it supremely reassuring to be able to read my ebooks that way, while not worrying about whether I’ll damage the device if I drop it in the water!

(Sure, I could also solve the problem by just reading a print book, but trust me, those don’t take well to being dropped in water either. And while I know folks who solved the problem by putting devices in Ziplocks, I’ve never been a fan of doing that. I’ve always been dubious that I’d be able to use the device as easily with a layer of plastic in the way.)

Mind you, I haven’t ever dropped a device in the water. I certainly don’t intend to do it now. Now, though, I won’t have to worry much even if I do. And I find that awesome.

As I’ve started reorganizing my ebook library to settle it in on the Kindle, I’ve been reminded of one thing about reading on an e-ink device which isn’t quite as nice. Which is, they’re not as good at PDFs. And some of my ebook library is in that format.

In particular, the Oasis completely choked on my PDF copy of Red Mars by Kim Stanley Robinson. Every few words or so, characters were missing for no apparent reason. This being entirely suboptimal as a reading experience, I checked it out from the local library so I could actually read it. (More on this below.)

Other PDFs in my library did not display this particular problem. I also tried Charles de Lint’s Spiritwalk, and while I’m able to read that one, the page sizes come through rather randomly. So it’s not as nice a reading experience as I’d like.

But really, this is less an Oasis/Kindle problem than it is a problem of e-ink devices being suboptimal for reading PDFs in general.

Library checkout is pretty awesome though

While dealing with the Red Mars PDF, I discovered that it’s super, super easy to check out a library book to the Kindle. I was already a fan of Overdrive; I have their app on my phone and iPad. I’ve also used it on the Samsung Nooks I’ve owned.

But in all those cases, I was checking out an EPUB file. I’d never tried to do a Kindle checkout before. Turns out all I had to do was get the email from the library that said my book was available, click on the link in it for Amazon’s page for the book, and then tell that page to deliver the book to my Oasis. Just as easy as using the Overdrive app on iOS, and avoiding the whole question of having to download the checked out book to my computer. Yay!

All my non-Amazon books

Second big weird thing about using an Amazon device for dealing with my ebooks is, of course, that the vast majority of my ebooks are not from Amazon. Which means I have to sideload them.

Fortunately, I’m perfectly capable of doing that. Calibre (and boy howdy do I love me some Calibre) was already my go-to program for managing my library. For anybody who wants to try getting third-party books onto a Kindle, Calibre is pretty much vital.

My library is huge, so chugging through all of it to convert things over to MOBI format is tedious. But it’s doable, and I figured out all the various hoops I have to jump through to make it work. (I’ll do a separate post about that.)

Moving forward, I’ll still do the majority of my ebook purchases with Kobo. I’m only willing to buy from Amazon if the author is an indie who only deploys to Amazon, or if the publisher is known DRM-free, such as Tor or Baen. Having the EPUBs is still important to me, if nothing else because no device lasts forever. And everybody else talks EPUB.

What I haven’t tried yet

In theory, the Oasis also plays audiobooks. I haven’t actually tried this yet, as I don’t normally listen to audiobooks. I can at least say that I’ve seen various reviews being piqued that the device doesn’t let you listen to an audiobook and read the text at the same time. And in theory, if you have both a text and an audio copy of the same book, you’re supposed to be able to switch back and forth between them without losing your place. I’ll eventually be trying this, just because I’m quite curious about how it works.

Likewise, I’ll want to try checkout of an audiobook from the library. More on this when I do that.

I’m pretty delighted with this thing, all told. I can’t quite recommend it for people on tight budgets–its price tag is hefty and that is worth due pause. Way back when, the original Nook I bought had a similar price tag. But ebook tech has been around a while, and there are plenty of serviceable e-ink devices around for cheaper, including Amazon’s own lower-end models. So whether or not the Oasis would suit you really depends on your budget, and whether its design and water resistance are worth the price.

I also can’t quite recommend it for people who don’t use Amazon as their primary ecosystem for ebooks. I’m willing to deal with it since I have the tech comfort necessary to sideload, but I also acknowledge that getting a large, predominantly third-party library onto an Amazon device requires jumping through a lot of hoops. And that hoop count may be a dealbreaker for folks. As always, one’s mileage will vary.

But given these large caveats, I’m still pretty delighted with the purchase. No Nook device comes close to competing with this thing. And while I’d like Kobo to step up its game in this arena, see above commentary. They’re still not down here in the States in any meaningful way, and to date, my customer support experiences with Amazon have been superior. If the device breaks, I’d much rather be dealing with Amazon’s CS than Kobo’s.

I’ll be keeping my EPUBs, nonetheless. And keeping an eye on Kobo’s devices for the future!

B&N and Kobo stomping on user ability to download books