So when last we left my Quebec trip report, I’d gotten to Montreal and had managed to rendezvous successfully with the other incoming attendees, and with the drivers who were on tap to get us from downtown Montreal to the site of Camp Violon Trad.

I’m told that Plein Air Lanaudia is not Violon Trad’s original location, and that a few years in, it’d gotten big enough that they moved to where they are now. During my time at the camp, I learned that at least some of the attendees had been there often enough that they did in fact remember the previous location. Which just goes to show you that this camp is so well loved that it has devoted attendees that come back every year–rather like Fiddle Tunes!

Since I have no experience with the previous locale, I can only comment about the current one. And to be sure, what I saw was lovely.

I was assigned to room in the Foyer building, which I can only assume was pronounced French-fashion, and which I certainly tried to say to myself as such for the duration. I shared a room with three other women, and our room had two bunk beds, so I wound up taking one of the top bunks as I was younger and a bit more agile than a couple of the others. Having a top bunk did rather make me feel like I was twelve.

Here’s the backside of the Foyer building, as seen from just in front of the dining hall. 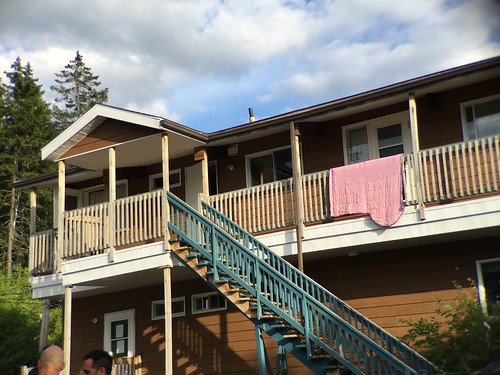 Since the room I was in (room 3) was up on the second floor, this meant I did in fact need to go up and down a lot of stairs during the course of this camp. While carrying a guitar case, my backpack, and often also my fiddle. And of course my luggage, on the way in and out! All of which certainly contributed to my exercise. And I certainly did enjoy just walking around exploring, since this was mostly how I got pics during the camp.

One of my goals wound up being looking at signs on everything and seeing how many of them I could translate. My favorite of these was “poubelle”, which I learned pretty quickly was the word for a trashcan. And you can see the full set of the sign pics here.

You will note that one of those pictures has Jean-Claude in it. This would be because of course I took Jean-Claude to Violon Trad. ;D I mean, how can you start the party if you don’t have a mammoth? Commencez la fête! 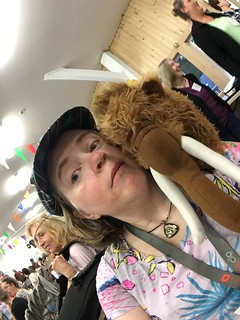 And it was very, very necessary to let him explore the grounds! And also to periodically bring him around to various events and pester at least a couple of the boys of Le Vent du Nord about whether I could get photo ops. All hail Nicolas Boulerice and Simon Beaudry for being good sports. <3

You all can see the full set of Jean-Claude at Violon Trad pics here.

(Side tangent! Note also that a couple of those Jean-Claude pics have a guitar in them. That? That there? That is the guitar of André Brunet, which I note here because André was super, super kind in loaning me his very own guitar so that I wouldn’t have to haul one of mine on a plane all the way to Quebec. I got it from him just before the beginning of classes on the Monday, and in between hauling it around to classes, I spent some time just playing it so I could get acquainted with it.

It was a lovely little guitar, with a good clear voice on it, though perhaps not as muscular and strong a tone as the General–which was kinda fine because this guitar wasn’t a dreadnought, so that was to be expected. And the case had seen quite a bit of usage, which is to be expected for the instrument of a professional touring and teaching musician. This got me amused remarks from Éric Beaudry when I enthused at him about André’s kindness, because of course Éric knows his bandmate’s guitar and case when he sees them.

Let it also be noted for the record that I took a rather inordinate amount of glee in discovering that André had the same kind of strings I use on the General stuffed into the storage box in his case. \0/ Elixir strings FTW!)

But back to the scenery of the place. Overall the layout was this: a central open area with an administration building at the front, and chalets surrounding that space on all sides. Opposite the admin building was the place where the younger attendees were staying. If I were to stand by the admin building and face the youth chalets, the buildings to my left would be the Grand Salle (more on this to come), the buildings where the professors and their families were staying, and the building where I had the guitar classes (more on this to come, too). To the right would be the Foyer building that I stayed in, and past that, the dining hall.

In the opposite direction, towards the building where I had the guitar classes, was the bridge I ventured over and which led to the hockey court, the equipment shed, and the Hebertisme sign. It was over in that direction that I spotted the zipline, too.

I quite enjoyed walking around the grounds, despite the fact that I was massively swarmed with mosquitos. Pro tip for my fellow Cascadians: if you go to a fiddle camp in Quebec, for the love of all that’s holy, do not forget the bug spray. Introvert Anna, who was shy about throwing herself headlong into evening activities yet didn’t want to hide in her room, thought it would be a good idea to hang out outside on Tuesday night practicing on André’s guitar. Only I forgot the bug spray, and boy howdy did the mosquitos find me tasty. (There was much complaining about this on Facebook, oh my yes.)

But aside from the Jean-Claude pics, I think I most enjoyed taking the shots of the lake. Like this one. 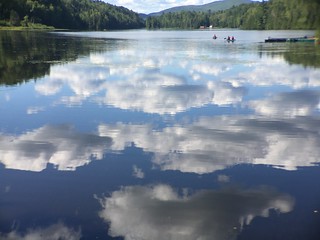 All of the scenery shots are tagged on flickr here.

What else? I didn’t do any of the possible camp-type activities that were available–like the kayaks or the zip line or the hockey equipment. But I did do a lot of walking around just to see the place and because I am an active walker. I think if I get to come back to this camp again, I’ll totally want to explore the Hébertisme arch and whatever that mysterious pathway was!

I also didn’t get a chance to explore St-Côme at all, about which I was a little bit sad. But it was too far away to get to on foot, and I had no particular reason to pester the nice gentleman Luc who’d given me a ride in to take me back over there, even though he did offer. (I did pester him to let me check his car when I misplaced my sunglasses, though.) I would rather like a closer look at St-Côme!

Weather-wise we kept alternating between quite nice and sunny, and ALL THE RAIN IN QUEBEC. It was a good thing I’d come with layers to wear!