This past weekend I had my latest lesson on the fiddle with Lisa Ornstein! We’ve more or less settled into a “once a month” kind of schedule, which is working out pretty well. And it’s a nice long lesson, too. Which is good, because if I’m going to drive all the way down to Olympia, a couple of hours of learning time makes that drive very, very worth it.

Lisa has told me some very gratifying things about how, since I have a bit of an analytical mind, this is standing me in good stead when it comes to understanding the various aspects of playing the instrument. And I certainly have to admit that coming at this as an adult student with a prior musical background is speeding things up a bit–Lisa only has to teach me the physical aspects of playing the instrument. She doesn’t have to teach me how scales work. We just have to focus on how to hold the instrument, how to hold the bow, and how to make noises that don’t suck.

I haven’t been practicing as often as I should, probably. (This is what happens when I have a full time day job AND I have writing to do!) But I do try to pick up the fiddle at least every few days and work my way through scales, and review how to hold the bow properly. We’ve wound up reviewing my bow grip at the beginning of the last couple of lessons, and this past weekend in particular Lisa had me move where I’m putting my thumb. I’ve had a bit of trouble getting it to settle properly on that notch between the grip and the frog–my thumb has a way of bending too much and coming in at a bad angle there. So Lisa had me move the thumb out to rest against the metal sleeve that holds the very bottom end of the bow hairs. She said this was often what Suzuki beginner students are taught, and during the lesson it certainly seemed to me like that gave me a more stable grip on the bow. Moving forward, I’ll be holding my bow like that and we’ll see where that takes me.

(More fiddle geekery behind the fold!) 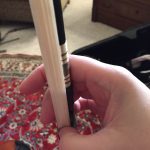 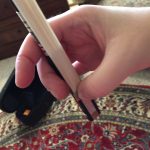 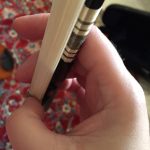 That “O” shape I’m making with my fingers is what I have to shoot for in a good bow grip. And that ties in really nicely to how the other players at last year’s Qualicum Beach workshop were telling me: i.e., pretending you have a little bird in your hand, and you don’t want to crush the bird. 😀

Lisa also had good things to say about my intonation. By which I mean, more often than not, I appear to be able to hit actual notes on the strings as opposed to making them sound like I’m kicking the cat. This is not a hundred percent reliable yet–if I come in at a bad angle with the bow, or if I’ve not tightened the bow up enough or rosined it properly before I start to play, I’ve noted that I get these weird airy sorts of sounds with a lot of overtones involved. So when I do practice, I need to work on those things. Especially getting a proper kinetic sense of what it feels like to have the bow resting on top of the strings rather than coming in from the left or the right.

More often than not, too, I’m doing pretty well setting my left hand’s fingers down in the right places to hit the notes correctly. Multiple Facebook friends who play stringed instruments have mentioned the whole notion of beginners putting tape on their instruments to signify where the fingers go, but so far, I don’t seem to need that. I’m doing pretty well just trying to develop a muscle memory sense for where the fingers need to be, and judging by ear as well.

During the lesson, though, Lisa did caution against trying to autocorrect if I don’t hit the exact spot I need to be in when I finger a note. Which I have caught myself doing. The problem here being that if I’m a bit off and try to immediately move my fingers, this can train the fingers into bad habits. So I need to be on the lookout for that.

(Note: I have never played guitar, mandolin, or bouzouki in anything but first position, so far. And now that I’ve actually looked up positioning and have a better idea of what that means, going farther up the neck sounds like a highly intriguing goal for the guitar, too. This will require further exploration if I do make it to Camp Violon Trad next year! It’ll also be highly intriguing to see if I get that far on the fiddle.)

It is, at any rate, very reassuring to be reminded that yes, even experienced players can screw stuff up. I mean, I already knew that–I can point at this or that recording in my collection where I know that the performer flubbed a note or a key change. I even also know that on the few times I’ve played in front of other people, unless I’ve done something really obvious like forget an entire verse, people won’t actually notice a screw up if they aren’t also musicians. Which is why, if you want to play in front of people, you have to get used to playing straight through an error. If you play smoothly through it, that’ll make it a lot less likely that it’ll be noticed.

It’s nice to have an experienced player actually remind me of that, though. 😀

Anyway. We also talked about interesting things I can do to vary up scale exercises, just to change things up a bit. And we talked about patterns to follow when changing bow directions–small changes for eighth notes, larger changes for quarters. I have a tendency to not push the bow as far as I need to when playing longer notes, so that’s something to practice too. When I do it right, I can get some nice volume and strength to a note!

The thing here will be to aim for thinking of scale patterns as “Miss-i-sip-pi” (for a block of four eighth notes) and “piz-za” (for a pair of quarters). Short bow strokes back and forth on “Miss-i-sip-pi”, two long ones on “piz-za”. For bonus points, do “Mississippi pizza” on the way up the scale and “pizza Mississippi” on the way back down. Also, I need to remember to give myself a moment between each note, to allow for the mental reset between short strokes and long ones, otherwise I will have the instinct to just keep playing the same way.

And, since I was already starting to play around with seeing if I could do a bit of actual tune (the A part of Road to Lisdoonvarna, specifically, since I can play this one on the flute in my sleep), I wanted to ask Lisa as well about how to do transitions between notes and across strings. If you know Lisdoonvarna, you know that the first couple of notes jump up a bit as the tune gets started. On the fiddle, this means I start with a pickup note on the open D, then my finger comes down on the D string to make an E, and THEN my finger needs to jump up to the A string and come down to make a B there. Which is a bit of a fast jump for a beginner.

How we addressed this was that Lisa encouraged me to practice arpeggios–which, again, I already knew about. But her advice there was specifically to still finger every note on the scale, but only play the notes that make the arpeggios. The idea here is to keep training my fingers to learn where the positions are, and later, once I get it more solidly down, I can get more ambitious about skipping around.

(I’m already getting a bit of an idea with this since I do have prior experience with fingerings on the mandolin and the bouzouki, and specifically with using the GDAE tuning. This helps. A lot.)

All in all, a highly constructive lesson and I continue to enjoy this immensely. Outlook for me continuing lessons into 2017 is very, very good. And we’ll see how long I go before I finally go “fuck it” and just outright buy this fiddle. 😀