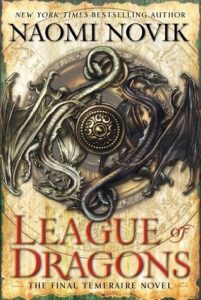 Short but sweet, just because I’m cleaning out my inbox again and wanted to file the receipts for these! Picked up from Kobo:

League of Dragons, the final Temeraire novel by Naomi Novik. Picked up because duh, Temeraire! \0/ My love for this series has been long-running, from the very first day I heard it pitched as “Patrick O’Brian meets the Dragonriders of Pern”. I mean honestly, how could I not love a series that’s what you get if you take Aubrey and Maturin and make Maturin a dragon?

Tor.com says that League of Dragons sticks the landing, and Dear Author liked it too. (And I may not often comment on Dear Author but yeah, if they’re going to go and review one of my favorite fantasy series even though they’re usually a romance site, fuck yeah I’m going to speak up in that comments thread. 😀 )

And Tor.com has a lovely Temeraire reread series of posts that Kate Nepveu just did. Her reviews of the books lit a fire under me to finally get caught up on the series. I found Crucible of Gold very satisfying, and Blood of Tyrants uneven, despite it involving an amnesia plot (and I am a known sucker for amnesia plots). I’ve started League as of today. More thoughts on this to come.

(And also, let it be noted that I am sad, SAD I TELL YOU, that I apparently cannot acquire the entire Temeraire series in French in ebook form. I went looking, because once I eventually finish doing Harry Potter in Trilingual Form, Temeraire would be a very strong contender for another multi-lingual reread!)

Meanwhile, I also scarfed Seanan McGuire’s Every Heart a Doorway while it was briefly available for $2.99 in electronic form. (Its standard price is $9.99 right now and that’s a little more than I’m comfortable paying for a novella.) But! I’ve been hearing a lot of great things about this story (including a lot of buzz at the aforementioned Tor.com), so I’ve been wanting to give it a go.

This makes 18 titles acquired for the year.

(Which, for those of you who pay attention to these posts, may strike you as a surprisingly low number given my book-buying history; here we’re halfway through the year already and I’ve barely cleared two digits. This would be because I am disgruntled at the return of agency pricing, which has made ebooks a lot more expensive from the big publishers again. So I’ve been making an effort to get caught up on reading books I already own, and for newer things by authors I don’t know yet, I’ve been checking those out from the library.)

gosh I have a lot of booksother people's bookstemeraire
June 18, 2016 by Angela Korra'ti