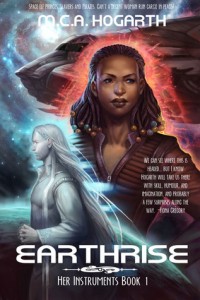 Welcome to Night Vale, the new novel from Joseph Fink and Jeffrey Cranor, the folks who’ve brought us the amazing podcast by the same name. (Which I heartily recommend if you haven’t gotten into listening to it already.) I’m going to be plowing through this pretty soon!

Also, Earthrise, which I nabbed when I saw James Nicoll post about it. The cover attracted me, both for having a heroine of color and an elven-looking male who seems to be a primary other character and possibly a love interest. Also, set in space, which apparently means ELVES IN SPACE, and I’m down with that.

BONUS: Earthrise is apparently book 1 of a trilogy, and at least as of this writing, it’s FREE. Which I’m also down with. And the covers on the other two books are also lovely, so I’m hoping it’ll be a fun read!

free books are awesomegosh I have a lot of booksother people's books
October 29, 2015 by Angela Korra'ti