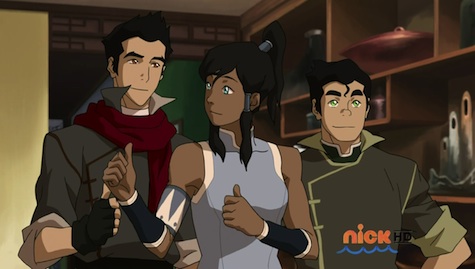 Depth and humor have returned to all the character interactions. I’m loving that airbending has spontaneously started reappearing in the world. I’m thrilled that there was minimal angst about the breakup of Korra and Mako, and that Korra and Asami are on splendid terms–and as for Asami, wow, she is a symphony of grace in a fight, isn’t she? And Mako’s really kind of adorable as he fumbles his way through trying to figure out how to deal with Korra now.

The twins now ruling the Northern Water Tribe is hysterical (my favorite line out of them so far: “Why did no one tell us we had a secret ice prison we could be throwing people into?”).

Delighted to see Mako and Bolin getting to explore their family history in Ba Sing Se, and Dara, Paul, and I were also all highly intrigued to see that the Earth Queen is kidnapping new airbenders and forcing them into her army. Countdown to Korra putting a stop to that shit in 3… 2…

Also EEEEEEE WE GET TO SEE ZUKO AGAIN. On a goddamn dragon. As is ENTIRELY RIGHT AND JUST FOR THE FIRE LORD.

I’m thrilled to be excited about the world of Avatar again. Korra, welcome back.

avatar: the legend of korraTelevision
July 7, 2014 by Angela Korra'ti

So they’re going to reboot MacGyver