Dara and I went to Norwescon a few weeks ago, of course, and I didn’t get to post much about what happened there since the con fell in the middle of my being ill. I didn’t do much at the con except rest and periodically do stints at the NIWA table in the dealers’ room.

But since I was in fact at the NIWA table, and paid my share of the table fee, that meant I was able to actually have copies of Faerie Blood on sale! I didn’t sell many, just one each of my paperbacks and ebook CDs. Still, this was a moment I had to capture in a picture. Those of you who follow me on the social networks may have seen this pic already, but I wanted to post about it here too! 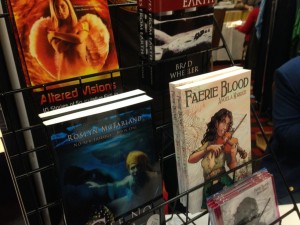 Faerie Blood on Sale at Norwescon

Some of y’all may see Faerie Blood in dealers’ rooms at future PNW cons, since I gave the NIWA treasurer, Brad Wheeler, custody of three of my paperbacks and three of my CDs so that he could take them to other events and sell them on my behalf. So if you happen to go to a con in Washington or Oregon that I can’t get to, tell me if you see the book!

faerie bloodniwanorwescon
May 3, 2014 by Angela Korra'ti