On Wednesday morning I got up to go in to the office as per usual–but was fairly certain the commute was going to prove wacky, given that the city had encouraged incoming parade-goers to use mass transit as much as possible. This suspicion proved ENTIRELY correct. The 522 that showed up at my usual stop just before 8am was jam-packed, and I got on long enough to see all the people ALREADY standing in the aisles. “NOPE,” I said, and got back off again to wait for the next bus.

That proved to be a 312, and while that one still had seats open, it was also pretty full. Lots of fans in blue and green, especially families with small children. The bus was buzzing with excited conversation, and I have to admit, that was pretty neat.

However, traffic was already pretty wackypants too. I didn’t get to work until well after nine-o’clock–and I’d noticed as well that several of my teammates had opted to just stay home rather than wrestling with the commute. By the time I got off the bus at 4th and Union, I saw a great number of people already lined up along 4th.

Most of the team did eventually show up at work, but only long enough to announce that we were hitting the parade in various waves. I myself left the office only about an hour or so after I arrived, long enough to get a little work done, and then get my lead’s signoff on going to the parade and then straight home, where I could then get on the VPN.

Dara, in the meantime, alerted me that she and Paul were having even more challenges getting downtown. They wound up having to jump on a 372, whose driver informed them that the 522, back at the Kenmore Park-n-Ride, had gotten swarmed with something like a hundred people all trying to get on. The 372 got Dara and Paul to the U-district, but from there the strategy of catching a 70, 71, 72, or 73 fell over. They wound up having to hoof it to Eastlake, at which point Paul caught a trolley and got ahead of Dara–who was starting to feel pulses of pain in her eye, due to the cold.

(Because make no mistake, it was quite chilly outside, too. This past week was unseasonably cold for Seattle, with temps during the day barely climbing out of the 20’s. And on Wednesday, that meant being outside for a parade was very, very chilly. I was suitably dressed, with one of those hand-warmers that Dara had ordered for me stuffed in my pocket, but still.)

We assumed that network connectivity would be pretty much impossible once we got into the downtown core, since we had long experience with this when PAX is going on. So we agreed to try to meet up at Westlake Park by 11am, which is when the parade was scheduled to start. I set out from Big Fish and headed along Third, from which I could hear the crowd buzz. Only when I got close to Westlake did I realize that there was going to be no way I’d cross that street to get to Westlake Park–and by then, Dara had reached me to let me know Paul had gone ahead of her.

So I started wandering back and forth between Union, Pike, Pine, and Stewart, trying to find a good vantage point and to see if I had a prayer of seeing ANYTHING over the heads and shoulders of taller people already pressed in tight along the sidewalks. I didn’t try TOO hard, though–partly because I figured that the actual football fans had better right to have a view than I did, and partly because moving around actually kept me warmer in the cold.

There were, indeed, a WHOLE LOT OF PEOPLE. Estimates on Wednesday came in at 700,000 all told, although now I’m hearing that those numbers may have been overblown. All I know is, there were a WHOLE LOT OF PEOPLE. And they were climbing on anything they could possibly climb on to improve their views. I saw people up on railings, on top of the fountain in Westlake, and climbing up into trees and onto lampposts. 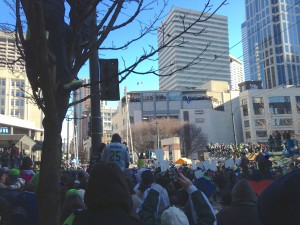 Climbing on All the Things

I had a nice conversation with one older gentleman who told me that he and his wife had been on hand in 1979 for the parade that the city threw for the Sonics–back in the day when they were still the Supersonics. He told me wryly that they hadn’t even known there was a parade going on when they stumbled across it. I can’t imagine how you’d fail to get that news in this day and age of the Internet, but I suppose it’s still possible!

And all up and down the street there were people yelling “SEA!” and others yelling back “HAWKS!” There was a DJ on hand in Westlake Park in particular, whipping people up, but a lot of the people I saw didn’t need much encouragement. I was quite happy to yell “HAWKS!” back at anybody who passed me, which pleased a couple girls who looked college-age.

All told though the parade was quite late–it was nearly noon by the time I heard from the aforementioned old gentleman that he’d just heard that the parade had only finally just gotten started. And by then I hadn’t managed to intercept Dara and Paul, and was ready to try to work my way north on the off-chance that I could get to a point where I could reach them on the phone.

I made it to Lenora when Dara finally actually got through to me and told me that Paul was at 4th and Virginia, a block south of me. So I backtracked and finally stopped right in front of the Dahlia Lounge, because by then the parade was finally reaching us.

From my vantage point, I actually got a good look at the august personages going past us on the fleet of Duck vehicles and military Humvees. I didn’t try to take too many pics, though, since I wasn’t sure of my ability to get good ones. I did get one of the cheerleaders, though! 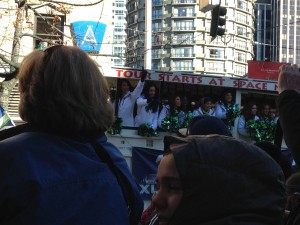 Dara’s a better hand with the camera than I am, though, and she got a few good ones of various team members and other important folks! You can find her pics over at her flickr account here.

I particularly liked this one, which is Marshawn Lynch–he was flinging Skittles into the crowd. To wit, LOL. 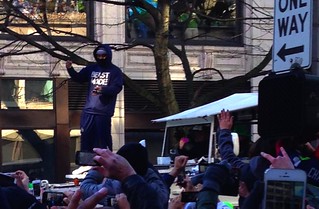 After the parade finally passed us by, the crowd began to break up. We knew that the festivities would be following the parade southward to CenturyLink field, where a rally was scheduled, but at that point we’d seen what we came to see. So I ducked across the street as soon as it was clear, and found Dara and Paul. And we promptly ducked back across the street right into Dahlia Lounge, with the bright idea of “hey, let’s have lunch and wait for this madness to die down”.

Three cheers for the Dahlia for seating us VERY quickly, and getting us quickly served tasty food and drinks as well. Which were free, given that I finally got to spend one of the gift cards I’d been racking up as yearly anniversary gifts from Big Fish. \0/

What to do after that was a bit more of an adventure, though. We cut across Westlake Plaza (and found it looking like a hurricane had hit it, with all the cups and other trash all over the place), heading for the bus stop at 6th and Pike to see if we had a prayer of getting on a bus to head home. We found a small crowd gathered there already, and confirmed that the numbers being reported by OneBusAway seemed, unsurprisingly, to be mythical.

So then we went into Gameworks to hang out for a while, and came back out once more only to find that the crowd at the bus stop was bigger.

Plan B: try the bus tunnels to see if we could catch a 71, 72, or 73 to the U-district. No dice. Not only was the crowd down in the tunnels even bigger, we were made VERY leery by how a 41 started spewing diesel fumes in front of all the busses backed up behind us.

Plan C: go back up to 3rd and Pike, and catch a RapidRide line D, the bus I often jump to get to Big Fish faster in the mornings if I’m in a hurry. That bus took us very near to Big Fish, in fact, and from there we hung out a while longer waiting for a 32 to show up to get us to the U-district. Once we got there, we thought we’d jump a 372 and use that to get home.

Which was all very well and good except for the part where 372s just were not showing up at the bus stop we reached. So finally, we got on a 75 to get us rather roundabout-ly to Lake City Way. By then, around 6 or so, we finally intercepted a 306 lumbering its way towards Kenmore, jammed to the gills, but not so badly that we couldn’t make it on. That last bus was the only one we had to stand on. But ‘standing on a crowded bus heading for home’ trumped ‘waiting out in the cold after dark’.

All told it took us about three hours and four busses to get home from downtown. Not the worst transit time I’ve ever had–that honor still goes to the Worst Commute Ever, in which I took eight hours to get home. And honestly, it was still kind of fun, really. The spirit of the whole thing was positive, even for me, a football agnostic. And breaking the jaunt home up into chunks like that helped.

I was quite impressed to hear that nobody got arrested. At all. Well done there, Hawks fans, not destroying the city! (Though really, hell, it was too cold outside for them to riot properly, I suspect. 😉 The delights of the #HowSeattleRiots hashtag on Twitter notwithstanding!)

I’d already heard that our Big Fish mascot Gutsy McDivot (the mascot for the Fairway Solitaire game) had appeared at the parade! But the next day I actually found the pics on Twitter.

And I was rather impressed as well to see a coworker’s video of his transit wackiness. He was trying to take the light rail to get to the parade. And mostly failing miserably!

He sent his video in to Q13 Fox, too, and they used it in their coverage of the transit adventures!

All in all: highly memorable day! And I’m happy the football fans in the city got to experience it. Go Hawks. 🙂

seahawksseattlesuper bowl paradethings that are awesome
February 9, 2014 by Angela Korra'ti