And now, the hospital report

As pretty much expected, I was at Evergreen only from yesterday morning until this morning. Many, many mad thanks and props to my friend Dejah Leger, who gave me a ride to the hospital, hung out there until I was out of surgery and settled into a room, and then came back to get me this morning. We got in some lovely musicgeeking about various Quebec musicians and hard-to-find albums, too.

Everything went well and Evergreen’s staff took good care of me. I got several nurses making very sympathetic noises indeed as I explained that my wife hadn’t been able to accompany to the hospital due to recovering from her own surgery. And to my surprise I honestly haven’t been in much pain at all following the procedure. My stomach feels weirdly stiff and sore, but to the degree of “I did a whole bunch of situps” rather than being actively painful. I can move around pretty well and I’m pretty coherent. I am on mild painkillers, but so far have needed only a single Percocet and a Tylenol when it’s time for me to have any painkillers at all. We’ll see if that continues once the anesthesia finishes processing out of my system.

I’m instructed to walk as much as I can tolerate, although I am not to do any vigorous exercising, and I’m to do “active” resting as well–things that let me read, or be on the computer, or in general keeping me occupied as long as I’m taking it easy. Which, already planned for. Yay, crappy movie marathon!

It turned out to be a very good idea to cut my hair, since that helped make me more comfortable at the hospital. And I spent most of the evening alternating between looking at Facebook comments, playing Plants Vs. Zombies 2, and reading a Nora Roberts novel on my Nook. Zonked out around 7:40ish and slept off and on through the night, round about to 6ish or so in the morning. This morning, Dr. Isbell showed up to chat with me and clear me to go home, and Dejah showed up at 10 to get me, so great turnaround time there, really.

The type of hysterectomy I had was specifically geared towards minimal recovery time, for which I’m grateful–specifically, laparosopsic hysterectomy. Since I’m still pretty young and healthy they felt this would be a good choice for me. And given that I am in fact in minimal pain at the moment, it certainly seems like it was the correct decision!

Now, they did go ahead and take my ovaries and tubes, too, so this was pretty much a complete uninstall of reproduction.lib, as it were. So any future attempts at reproduction on my part will have to involve cloning, or parthenogenesis, or maybe just splitting in half like an amoeba. Or maybe getting Dara to build me a duplicator, or getting a hold of the copier that can duplicate people in that episode of Gravity Falls.

And okay yeah yeah I could also more figuratively reproduce myself in my work an’ stuff.

So now I’m at home and I get to wear pajama pants and loose shirts, and watch a whole LOT of crappy movies. Dara goes in for her next eye followup tomorrow afternoon, at which point, hopefully, she’ll be cleared to look up again. At that point, the Movie Suckoff will officially begin!

Many thanks, many hugs, and much love to folks on various sites who have been sending kind words, offers of meals, and offers of companionship. Thanks again to Dejah for playing chauffeur, which is totally getting her dinner at a future date of her choosing, and probably a bottle of Sortilege as soon as I can find her some. Thanks to Geri in BC, who’s sending us some help for Dara’s stressed back and neck. And thanks to Kaye, who sent us a big ol’ gift package full of chocolate-covered strawberries and pineapples and general tasty treats! 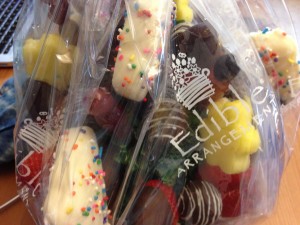 Once Dara’s cleared to look up again and we can return the couch to its usual configuration (right now we’ve got it set up so she can lay on it as comfortably as possible and play with her iPad at the same time), we’ll be visitable. Local folks, if you want to come over, just let us know! Call me if you have my number, or email, or drop me a PM on Facebook, whatevs.

And as a lovely postscript, I’ve also just received word that my other carbon fiber flute purchase, the fife in D, is ready to be shipped up to me! And I just got my “Greetings from Mount AWESOME” t-shirt as well from Teefury. 😀

Now comes the recovery agenda for the week, and movies, and more reading. Cherie Priest just dropped her brand new release, Fiddlehead, which I happily slurped down onto the Nook; I’ll be buying the paperback of that ASAP as well. And I got a Kickstarter backer reward for my friend Chrysoula Tzavelas’ new release as well, Infinity Key! And I hope to finally finish up Chapter 14 of the Trilingual Hobbit Reread, too!

All in all this’ll be a relaxing week.