This just in: well, my week’s been ruined now

Some of you may be aware, Internets, that I had to have a medical thing done last week. The short not-TMI version of this was that I had a hysteroscopy due to weirdness in my menstrual cycles. I had previously been wondering whether this was due to my going perimenopausal due to being in my mid-40’s, but given my previous history with my thyroidectomy and my stage 0 breast cancer, I had it strongly recommended to me that we should have my uterus checked out just to be sure.

I just got called with the pathology results from the sample they took out. The phrase “pre-cancerous change” was used in the conversation I had with the doctor.

And he recommended we have my uterus out. And my ovaries and tubes as well.

I am to come in on the 10th for a followup appointment to discuss these results and what my options are moving forward.

I wanted to be done with having to have parts of my body cut out due to threatening to turn into cancer.

But apparently I’m not.

ETA: To everybody who’s been expressing their support to me on the various sites I’ve posted this news to, thank you.

At this point I’m mostly just tired and numb. I can’t even manage to muster any real rage for this–because as I told the doctor when he called me with the news, part of me was half-expecting something like this as worst case scenario just because I have been down this road before. I do have a history of portions of my body up and deciding to pull shit like this.

I can deal with it, I know I can at this point just because I have before, and I’m at least grateful that this time around I had a couple of years’ breathing room to get my strength back.

Right now though all I can think of is Tommy in O Brother Where Art Thou?, when Delmer boggles at him about trading his immortal soul to the Devil in exchange for being taught how to play the guitar. Tommy’s answer was a laconic “well, I wasn’t usin’ it!”

I would just like to now protest that losing my uterus WILL NOT IN FACT IMPROVE MY GUITAR PLAYING. Something seems medically awry here. I feel like I should be getting some kind of musical superpower out of this deal. 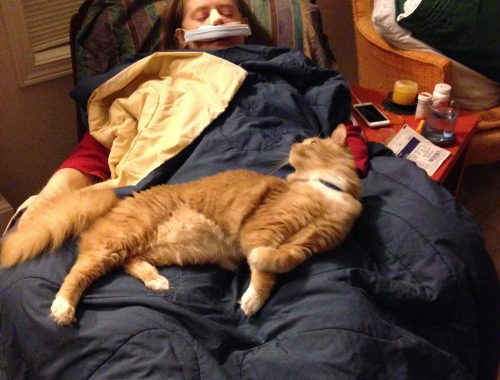