First up, I promised you all another handout of a copy of Valor of the Healer to a randomly selected commenter from the poll to name my mammoth! I am happy to announce that that winner is… Jessica! Who, based on comments I saw dropped on Dara’s signalboosting of the poll, is on LJ! Jessie, if you’re reading this, I’ll be finding you to get in touch with you about receiving your copy of the book!

Second, for those of you who didn’t see me announce this on the social networks this morning, the poll to name the aforementioned mammoth is, in fact, CLOSED! I got a whole boatload of creative suggestions, and thank you all for submitting them. There was a particular hard, protracted battle between the top three names, but in the end Fred G.’s choice prevailed. And so I am also quite happy to present to you genius billionaire play-mammoth genderqueer philanthropist Jean-Claude Mamut! 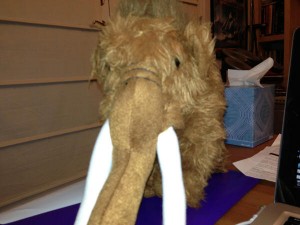 Asked about the honor of this naming, Jean-Claude was quoted as saying, “Merci beaucoup à tout le monde! Oui, I am very grateful for all who voted upon my name. It is a man’s name, c’est vrai, but sometimes I am Jean-Claude, and sometimes I am Jeanne-Claudette, or Jean-Claudette, or Jeanne-Claude. I am a very small mammoth, but I am legion and in me there are multitudes. If you are not sure how to call me, you have but to ask.”

Further asked about how exactly a French-Canadian mammoth wound up in a gift shop in a British Columbian museum, only to be purchased by a perky blonde author and fangirl from the States, the mammoth of the hour replied, “Ah oui, that is a long story and there is not enough whiskey to tell it properly. I will say now only that it involved many fermented berries, three other mammoths, an ice floe, and eighty-nine traffic cones.”

And, asked if sie had anything further to add, our mammoth finished, “Not for me, merci! Anna, she is the storyteller. Please buy her new book Valor of the Healer so she can afford to buy me more fermented berries. And maybe a small herd of my fellow mammoths.”

Fred G., who came up with the mammoth’s name, has been given his copy of the book!

Other Giveways in Progress

But wait, there’s more! If you missed out on the poll, there are now two other active giveaways running for the duration of the week–and therefore, two more shots to win your own copy of Valor of the Healer!

I have a post up on Carina Press’ blog right over here, where I’m talking about the challenges of writing Faanshi as a character, and how to portray the strength of a young woman who is neither physically strong nor outspoken in the slightest. Come over and tell me about your own favorite female characters who’ve shown strength in unexpected ways, and I’ll put you in a random draw for another copy of the book!

And on a much lighter note (because at Anna the Piper Enterprises, we try not to get too SRS BZNZ unless absolutely necessary), I also have this giveaway going! Because Carina put up some promo tweets about me today, and I feel that it’s not fair that THEY get to have all the fun talking about me. So spread your own ‘fun facts’ about Anna the Piper for yet another way to get a copy of the book. These ‘facts’ do not even have to be TRUE, and in fact, the lulzier the better. ;D

Thank you all for your ongoing support of the book!

Back to it, she said hopefully

Flash Giveaway for Valor of the Healer #3!

Lament of the Dove status report