I posted a bit about this on the social networks, but here’s a somewhat longer report.

What I went in for this morning at Evergreen was a stereotactic biopsy. Which basically means, a minimally invasive procedure in which they use targeted imaging and a thin needle. I had to lay face down on a table with a hole in it, so as to let them get at the tissue they needed to get at. And they shot me up with three different kinds of numbing agents, which was good; otherwise all the various pokings and proddings would have been a lot more uncomfortable than they actually were.

The doctor and the nurse tech (Dr. Shook and Jennifer, respectively, as they introduced themselves to me) who did the procedure looked pretty familiar to me, once I showed up, from the first round of fun I had with this. Which would be almost amusing if not for the whole “not wanting to do this again” thing, but hey. They’re good people and they do their job well.

And their job was done well this morning, thankfully. There was some concern about their being able to get to the tissue they needed to get to, given that the calcifications in question were so tiny that that might have been a problem. But they came in from the underside of my breast, and got a good track to the calcifications–so they did get the samples that they needed. And they promised to fast-track the samples through Pathology, so as to hopefully have them for me when I come in to talk to Dr. Towbin tomorrow. (Dr. Towbin, comma, who I also remember from the previous round of fun; kinda difficult to not remember the surgeon who does major surgery on you, even five years after the fact.) I asked them to yes, please, do try to get me the results before Wednesday, since if it’s going to be bad news, I’d just as soon NOT get it on my birthday, thanks.

So. All things considered, it went as well as possible. When they were done they took a couple of quick mammogram images, and sent me home with a yellow rose. 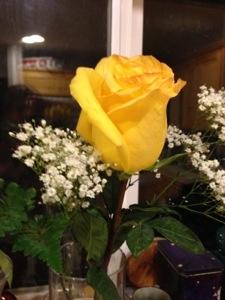 I’m under instructions to take acetaminophen as needed for pain, and to ice the affected area for the next couple of days. I’ve been having trouble keeping my mental ducks in a row for most of the afternoon, and had to zonk out for a while; but then, I did just have a biopsy done, and I’m still kind of stressy and just waiting for whether the shoe is going to drop tomorrow morning. So I’m trying to cut myself a little bit of slack on that even as I’m trying to get work done, both for the day job and for the writing.