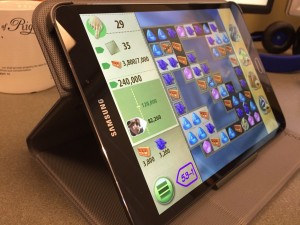 Gummy Drop on the S2

Those of you who’ve been following me for a while will know I’ve been eying Barnes and Noble askance for some time. I’ve taken major issue with their website thanks to their last round of changes, enough that I haven’t bought an ebook from them since. And I’ve also been looking askance at some of the changes they’ve been implementing in their brick-and-mortar stores as well.

Why did I buy another Nook tablet?

Given this, one would be justified in wondering why exactly I’d want to pick up another tablet from them. Simple: I wanted to upgrade from using the last tablet I’d bought from them, the Galaxy Tab 4 Nook, because it was still stuck on Android KitKat and I wanted something with a bit more power to it.

Plus, B&N has been running a trade-in promotion that let me bring in my old Nook HD and trade it in for a $50 credit off the price of a new device. So I decided to take them up on that offer, while wiping the Galaxy Tab 4 back to factory defaults so that I could give it to Dara and let her use it as an upstairs web-browsing type device when she didn’t feel like breaking out the laptop. (And also because we can get all Star-Trek:-The Next-Generation-y with the ability to just pick up a tablet and do stuff in our house.)

Thanks to the credit, not to mention the VISA gift card I’d gotten from the day job as my last work anniversary gift, I was able to get a new tablet from B&N more cheaply than I could from anywhere else. And even though I find Samsung frustrating in how long it takes them to deploy upgrades to the Android operating system, I did like the Tab 4. After playing around with an S2 in a B&N recently, I decided I’d probably like that tablet, too.

Which, at the end of the day, pretty much means I liked the idea of having a new Samsung Galaxy tablet more than I disliked buying anything else from B&N. So there ya go.

So here’s what I like about the S2. You can take this as you like, if you want to consider buying a Samsung tablet–whether via B&N, via Samsung, or via some other vendor.

One, I like the size. It’s not quite as big as my iPad, and it’s ever so slightly lighter, which means a bit less weight in the backpack on the commute. And that’s always a good thing. It’s a little bit bigger than the Tab 4, but that’s offset by how it’s also thinner. Even with an 8-inch screen, it’s still well within the range of device sizes that are comfortable for me to handle.

Two, the processing ability is better than the Tab 4. Which means, for my purposes, that’s it’s a better gaming tablet. So I can happily play Gummy Drop and Dungeon Boss on it. Sometimes with both running at once, similar to what I can do on the iPad, a trick I don’t think I could have pulled off on the Tab 4.

Three, the adaptive screen is kind of neat, though I don’t know how much of this functionality is the tablet and how much of it is coming in with Android Lollipop. By adaptive screen, I mean that there are settings that can automatically adjust the brightness and color saturation for certain apps under certain conditions. I’ve actually turned this off since I find that it makes Gummy Drop and Dungeon Boss both look over saturated–but I appreciate that the tech is there. There are other settings I’ll have to try on it, like Reading Mode.

Four, it comes by default with 32GB on board, which means I no longer have to rely upon having an SD card in the device to carry a suitable portion of my digital library with me. Which also means a bit of a performance improvement as well, since the OS doesn’t have to read stuff off the card.

In terms of engaging with content, the experience is much the same for me as it was on the Tab 4. This is, after all, a full-on Android tablet, so I can install whatever apps I want on it. So I’ve got the full fleet of book apps that I currently need for my arsenal–not only the Nook apps that come bundled with this build of the OS, but also Kobo, Kindle, Overdrive, and Calibre Companion. (Still working on deciding which app is best for reading my indie books that aren’t immediately accessible via the other apps.)

I’m not planning on using this as a device to watch movies or TV–that’s what I’ve got the iPad for. (All the video I buy is on my Apple account, anyway.) So I can’t really comment on whether this device would be good for that. If I get a chance to try that out, though, I will update this post with that data.

It was super-easy to get my previous apps back onto it, I’ll have to give it that. This is all on Google, though, since the Tab 4 had been backing up to my Google account. So when I set up the S2, it was all “OH HEY do you want me to restore everything from that backup?” So props for that.

Possibly of interest for my writing

The S2 came bundled with Microsoft Office apps for Android. To wit: there are now Microsoft Office apps for Android. And a bit of playing around with Word showed me that the free apps, even without an Office 365 subscription, will finally let you actually do things like edit and save documents. And, they’re even acknowledging the presence of other cloud services besides Microsoft’s. The Word app on this thing seems perfectly happy to talk to not only OneDrive, but also Google Drive and Dropbox.

And once I actually opened one of my manuscript files in it, I found out that the free app does actually give me access to the Track Changes functionality of Word. Which, aside from the ability to just write and save documents, is what I use Word for.

All of which tells me that I could actually write on this thing in a pinch. Whether I’d want to edit on it without an actual keyboard is another matter entirely, though. To date, I’ve found that if I need to edit a story, I really need a full keyboard and mouse pointer to do it smoothly.

But hey, the apps are here, and a bit of googling on the part of a coworker indicated that non-B&N Samsungs are also coming bundled with these apps. Which means you’d get them if you bought the device from somewhere besides B&N. Which is worth thinking about in general if you’re in the market for an Android device, and you have any need to do work in Microsoft Office on it. Especially if you’re a writer. (I think I have fodder here for an entire other blog post!)

Since this is a tablet I expect to be carrying around on my commute, I did actually buy a cover for it as well from the B&N store I went into. Sure, it’s a Nook-branded cover, but I did like the color scheme on the one I chose. It lets me look at the tablet in both orientations. And it’s got a nice little magnet flap to hold the thing closed.

Should you buy this tablet? So far it seems lovely to me, a reasonably small, light device that nonetheless has a decent amount of power for what I need it to do. I’d say that if your device needs are similar to mine, this one’s worth looking at.

Should you buy it from B&N? That’s another matter entirely. It’s worth considering if you have an older Nook you can trade in on. But if you’re not already a B&N customer, you may well be better served buying directly from Samsung or from other stores near you that sell electronics.

Since I got a bonus from work, I have elected to add another ereader to my collection: this time, one of the new Samsung Galaxy Nooks from Barnes and Noble. Since I’m an established B&N member, I was able to get one at a bit of a discount, and the devices were on sale aside from that this past weekend as well. So I got one for considerably cheaper than normal.

Y’all may recall that I acquired a Nook HD not terribly long ago, and by and large, I rather liked it. And for those of you keep score, I have a Kindle Fire HDX too. So how does the new Samsung Nook 7 stack up against those?