The second post of today’s Boosting the Signal doubleheader features fellow Here Be Magic author Rebecca York. I’m quite honored to have her on my column tonight, given that I’ve got a few of this lady’s paperbacks on my shelf! Her entry in the Here Be Magic boxed set is the novella Terror Mansion, and she’s sent me an excerpt from same to run for you all here now. Her character Wyatt Granger’s goal? Find the mysterious woman he’s certain needs his help.

This wasn’t Wyatt Granger’s routine nightmare. Usually he had a clear vision of some unfortunate future event that he might or might not be able to alter.

Instead he saw a confusing swirl of murky images with shadowy figures appearing and disappearing, mostly at an old building near the dock in a seaside town. More confounding were the scenes in what looked like a house of horrors, filled with distorted mirrors, a laughing but menacing clown and places where the floor dropped out from under your feet, sending you to the depths of hell.

But always at the center of the whirlwind was a beautiful young woman with terror in her wide-set blue eyes and her blond hair in a tangle around her heart-shaped face.

When his own eyes blinked open, he lay with his heart pounding, fighting his way back to reality. But the here and now kept slithering away. What he saw instead was the woman’s face floating in his mind, the most indelible image from the nightmare.

“Who are you?” he whispered as he sat up and thrust aside the tangled bedsheets.

Although she wasn’t there to respond, he had no doubt that he was going to meet her soon, and the encounter was going to change his life.

A dramatic way to put it? Maybe, but he knew to the marrow of his bones that the dream had been about his own future—even when his prescient nightmares had never been personal before.

“Crap,” he whispered under his breath. He stood up, pressed his feet against the cold floor and walked naked to the window of his condo, where he stood clenching and unclenching his fists as he looked toward the glimmer of dawn on the horizon.

He ached to shake off the vivid confusion of the dream.

But instead of the bare tree trunks outside, he saw the woman’s face, pale and intense and beautiful.

“Who are you?” he asked again, but he heard only the throbbing of the blood in his veins.

He might not know her name, but he had to find her. He could have fought the feeling of urgency that threatened to choke off his breath, but the truth of the dream was burned into his soul, even when he had no way to cope with it on a logical level. All he knew was that he had to go to her. And then he had to take her in his arms and protect her—even when he knew she was going to mount a savage denial that she needed his aid. 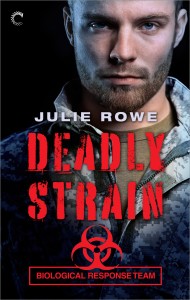