(This post is a little overdue, as all of this went down a couple of weekends ago, and I didn’t really have the chance to sit down and write this out in full until now! Plus, there was a session to go to as well as questionable mammogram results that, thank all the universe’s powers, turned out to not be a problem after all. So let’s return to this post in progress and get this written up, shall we?)

Y’all may remember that last year in February, I had the distinct pleasure of getting to attend a workshop in Qualicum Beach, at which André Brunet spent a glorious weekend teaching a bunch of us how to play several tunes. Well, we all had such fun doing that last year that our hosts, the Beatons–not to mention André himself–decided we had to do it again.

And when I learned from Joyce Beaton that this was happening, I leapt RIGHT ALL OVER THAT. Because last year’s workshop was a huge influence on my decision to start taking official fiddle lessons! Plus it’s just such great glorious fun to hang out with a house full of musicians for a weekend, learning things and jamming.

Better yet: this year I brought Dara. 😀 Not to mention a whole pile of instruments. 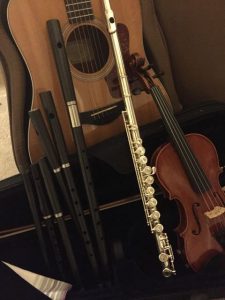 (For those keeping score, the instruments in this picture are the General, my guitar; my as of yet unnamed fiddle; Silver, my flute with keys; my carbon fiber and blackwood whistles; and my quartet of carbon fiber flutes, the little D, the G, the A, and the big D.)

END_OF_DOCUMENT_TOKEN_TO_BE_REPLACED

And now, a fiddle report!

I’ve mostly been talking about this on Facebook as of late, but for those of you who don’t follow me there, I wanted to do a post to get caught up on where I am with the fiddle lessons!

The biggest news here is that since I got promoted at work and got a lovely bonus to go with that, I went ahead and bought the 3/4-sized fiddle I’ve been renting for the past several months. Which of course means that I now need to update the official list of the Murkworks Household Instruments! And this fiddle also needs a name. I’ve been half-jokingly calling it “Rental” for a while, but now that I actually own it, not so much? I dunno yet. Unless I can come up with an amusing pseudo-French word for “Rental”. ;D

I also invested in a much better bow, a process which took rather less time than I anticipated–in no small part because Kenmore Violins had only four 3/4-sized bows immediately handy. (The rest of the ones they had in stock needed to be rehaired.) And the first one I picked up just sounded so very delightful, so I went YES PLEASE and bought that one.

Brought the new bow home and the jump in sound quality was immediately apparent to Dara–who, although she has hardly any fiddle experience either, does have an excellent ear. I am still very much a fiddle newbie myself, but oh my yes having a much better bow makes the experience of playing so much nicer.

Materials-wise, the new bow is a wooden one, vs. the carbon fiber one I’d been using. And I would not be surprised if it had better hair on it. Sound-wise, it produces a tone that’s much richer, smoother and… creamier, I guess. I don’t know if that’d make sense to people with more fiddle experience than me, but that’s what it sounds like to me!

I’m also much more able to just hold this bow. I’d expressed frustration to Lisa, and also to the owner of Kenmore Violins, that one of the issues I had with the CF bow was that when I tried to hold it properly, my pinky kept slipping out of place. So far this hasn’t happened with the new one.

I’ve used the new bow only a couple of times so far, but so far it seems like I don’t have to flail so much to find the proper amount to tighten it, either. Which I daresay will help with my consistency of general sound. The other frustration I’d had with the CF bow is that I was having a hard time determining exactly how much it should be tightened for play–because I was trying to go by what Lisa had advised during our lessons, except that it seemed like that bow wanted more tightening than that. I kept getting a scratchy, airy, overtone-laden sound, and I couldn’t tell whether this was because the bow was sub-par, my technique was sub-par, or a little bit of both.

But now I have a new lovely bow! So I can work more on my technique! 😀

As to what I’ve actually been learning: Lisa’s got me working on arpeggios at this point. I can more or less reliably produce the G, D, and A scales, and I’ve been working on the arpeggios in those keys as well, going through several simple exercises to practice the finger placements. If I’m feeling particularly ambitious, I also work on simple tunes. Mostly that’s still “Frere Jacque” and a bit of “Road to Lisdoonvarna” as well, just because I’m still not too good yet at doing string transitions at anything resembling proper speed. I’m still having to work on what Lisa has called “stop, drop, and roll”–the sequence of individual small motions necessary to jump from a note on one string to a note on another.

What’s made this more fun though is that Dara has started jumping in on practicing with me. Since I have specific exercises Lisa’s given me, Dara’s doing those with me, since she does have her own fiddle and a non-zero level of “whelp I might as well learn a bit more about this thing” interest. Dara’s also better than I am at string transitions–she can whip out a closer-to-credible “Lisdoonvarna” for example. But I’ve been sharing with her tidbits that Lisa’s been teaching me, such as the proper way to hold the bow, and what’s supposed to happen in terms of what angle you keep when you’re bowing. (You’re supposed to keep a straight angle. I don’t yet. I keep curving a lot and need to work on that.)

And yesterday when we practiced, we derped our way through the C and upper octave G scales. I wanted to do this in no small part because I wanted to see if I could pick out the opening notes of André Brunet’s lovely waltz “La fée des dents”. Which is in G–so I need C naturals in there. So I clearly need to expand the scope of my scales! But happily, C and second octave G use the exact same fingerings, just jump over a string. So that’ll be easy to practice.

I will also need to think about other keys suitable for session tunes. E minor, A minor, and B minor all come immediately to mind. If I can build up my list of scales, I can get closer to what I still do on the flutes to warm up to this day: i.e., work my way up through progressively higher scales. And I still have flute exercises ingrained into my subconscious that involve first doing a scale for a given key, and THEN doing the matching arpeggio. So I want to do that on the violin as well.

Relatedly, I’m finding that one of the very first exercises I remember playing in sixth grade band is popping out of the back of my brain again! That exercise works like this:

(Side note: WHOA there’s a WordPress plugin that does ABC notation! Which is how I did that bit of music up there! \0/)

The fun thing about that exercise is that I have a distinct memory of my sixth grade band playing through it like that, but then doing it again staccato. And boy howdy am I not prepared to do staccato on the violin yet. That’ll be for getting ambitious later!

ANYWAY… this is all exciting and I am now a fiddle owner as well as a fiddle student! I continue to have wonderful fun learning from Lisa Ornstein, and I do heartily recommend her for anybody in the Puget Sound region who wants to learn violin, particularly if you have an interest in Quebec trad or Old-Time music.

AND! Dara and I both will be heading up to Qualicum Beach this coming weekend for a fiddle workshop. Y’all may recall that last year I had an amazing time at the Andre Brunet workshop there. Well, all parties involved had such a lovely time that we’re doing it again this year. And this time I’m bringing Dara, because it’ll do us both good to hang out in a house full of musicians for a whole weekend. And this time?

This time I can come with a few more clues about the fiddle. Stand by for a full report, Internets. It’ll be AWESOME. 😀

This past weekend I had the very great pleasure of being able to attend a small fiddle workshop featuring André Brunet of De Temps Antan! The workshop was held on Qualicum Beach, at the home of the same wonderful couple who hosted the house concert I attended in August 2014. And I was overjoyed to be invited to come back up to Qualicum for this–because as I’d written in that post, for the chance to learn from André, I’d do that long drive again in a heartbeat.

You will notice that this was a fiddle workshop, and that I am still not a fiddle player. But I am a flute player, and moreover, just hanging out in a fiddle workshop was valuable to me as an exercise in hearing assorted tunes broken down into smaller phrases. Even after a few years of trying, I still struggle to keep up in a full session environment. So it’s hugely helpful to hear someone break a tune down into bits that I can then try to reproduce by ear. It works in my brain the same way that trying to read French does. I.e., it lets me better understand the overall structure and feel of a tune. So I will be leaping all over any tunes workshops I can get.

And you guys, this past weekend? Amazing.

END_OF_DOCUMENT_TOKEN_TO_BE_REPLACED

This weekend I engaged in my lightning-strike road trip up to Canada and back–specifically, to Qualicum Beach to attend a music workshop, house concert, and post-concert session, featuring my boys of De Temps Antan!

Which meant I got up at 4:30am on Saturday morning and spent pretty much all of the morning in transit in order to get to Qualicum in time for the workshop. And I spent pretty much all of Sunday in transit home. But the time in between? Stupendous levels of awesomeness, and worth every minute of the hours I spent on the road and on ferries! For the chance to learn more tunes from André Brunet, I’d do it again in a heartbeat.