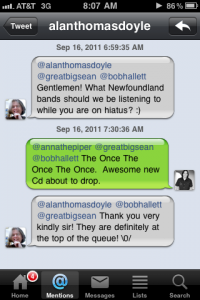 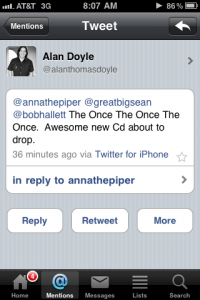 Okay, all you bands over there in Newfoundland? You b’ys aren’t going to take this MIGHTY QUEBECOIS INVASION of my iTunes playlists lying down, are you?

The Irish Descendants (Across the Water, Rollin’ Home, So Far So Good, Southern Shore)
The Fables (all of their discs)
The Punters (Certified Trad. Music, Songs for a Sunday Morning)
Shanneyganock (Volume VII)

Recommendations for any specific other albums by any of these groups welcome!

Also: the Navigators have already been brought to my attention, but so far I haven’t been able to find their albums sold somewhere where I can actually get them. Recommendations on that also welcome!

And, anybody not on this list, I want to hear about them. Bonus points if they’re anyone GBS has had dealings with, extra bonus points if there are bouzouki players involved! GBS-like style–i.e., high energy, with big full harmony on the vocals, the more people in a band singing the better–is ideal, although I’ll take smaller groups or solo artists too!

Wikipedia informs me that Mr. Mills was best known for popularizing Canadian folk music, and it’s very clear, looking over the track listings for both of these albums, that my beloved B’ys either pulled hard from his songs or else were pulling from the same sources he did! Between these albums, I see a whole bunch of songs that were much, much later covered by GBS:

Mr. Mills’ versions are of course much more old school, and a lot more folksy. But damn, it’s weird and fun listening to his earlier versions of these songs. I’m very tempted to get both of these albums, just for the giggle factor of the contrast to GBS’ versions!

And clearly, Amazon ignored the “sexy, bouncy, long-haired bouzouki player” part of “customer’s affection for Newfoundland folk music”, when their auto-recommender code sent me that mail. 😀