M.M. Justus is a fellow indie writer in the Pacific Northwest, who has a line of time-travel related romances she’s been deploying for sale. Much Ado in Montana, however, is her first contemporary! 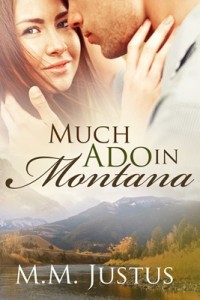 Much Ado in Montana

Hello, folks. I’m Dr. Swanson, or, as most folks here in Campbell, Montana, call me, Dr. Samuel. I’ve been the doctor here for donkey’s years–since, well, for longer than most people can remember. Campbell’s not a big place, or a fancy one, and we’re pretty much out in the back of beyond. As the young people are fond of complaining, we’re a two-hour drive from the nearest mall. But we’re smack in the middle of God’s country, surrounded by wilderness, with the snowcapped Cabinet Mountains watching over us, and there’s no better place to be.

Kalispell’s where that mall is, not that anyone with any sense cares. It’s where the nearest hospital is, too. So when it comes to medical care, I’m the only horse in town.

Like I said, I love it here. My wife grew up here, and my son, and I wouldn’t go anywhere else. People here in Campbell are the salt of the earth, and I’ve loved doctoring ’em for, well, donkey’s years.

My son Timothy, on the other hand…

He went off to Seattle to the University of Washington to go to medical school, just like his old man, and graduated with honors. I couldn’t be more proud of him. I couldn’t wait for him to come back home and work with me, and take over my practice someday.

But as soon as he saw the bright lights of Seattle, he told me he didn’t want to come back. He’s young, and smart, and he can work anywhere he wants to. He needed some time to get the wanderlust out of his system.

But the thing is, I’m getting old. And no one who hasn’t grown up here is going to stick. We found that one out the hard way. And I’m pretty sure–no, I’m not going to pussyfoot around it–I know there’s something wrong. I can’t remember like I used to. Things happen and I can’t figure out how. Sometimes I’m not even sure how I got somewhere. My lovely Avis is worried about me, too, and I can’t do that to her.

But I can’t leave the good people of Campbell without a doctor, either.

Tim’s coming home for my seventy-fifth birthday party in a few weeks. I can’t wait to see him, and I’m not the only one. His buddy Jack, who teaches science at the high school and spends his summers out in eastern Montana digging dinosaur bones, has been telling everyone how much he’s looking forward to seeing Tim again, too. So have most of the girls in town, from what I understand, except for little Becky Thorstein, but then she’s sweet on Jack. Well, Tim is a handsome young man. Takes after his father that way, he does.

What was I saying? Yes? Oh, yes. The girls and Tim. I know one girl in particular who’s got to be looking forward to seeing him again–our pretty young town librarian, Tara Hillerman.

They’ve been sweet on each other all their lives, but something happened while they were both away at college. No one would ever tell me what. I suppose they thought it wasn’t any of my business, but whatever it was it must have caused a world of hurt.

Well, it’s time for them to kiss and make up. It’s time for Timothy to settle down. There’s nowhere else he should be doing it. And, I bet, no one but Tara he’d want to do it with.

What was I saying? Oh. Well, he does want to come home, you know. He just doesn’t know it yet.