Alexis Radcliff is an author who emailed me out of the blue asking if I’d consider reviewing her book. I told her I couldn’t guarantee a timely review, and instead recommended she send me a piece for Boosting the Signal so that she could appeal to y’all directly about whether you might like to read her book. Which is, by the way, A Vanishing Glow, which she described to me as ‘a deep and thrilling blend of steampunk and flintlock fantasy’. So maybe what you might get if you smoosh Boneshaker and the Rebels of Adalonia books together? If that sounds awesome, read on for an excerpt from the book. Which nicely features a clear goal of SCIENCE! Or at least, science in the name of war. Check it out. 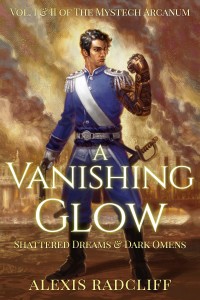 “Isn’t this kind of dangerous, Doc?” Verse rubbed her arms and looked around the field. “I feel like we should have ear protection or something.”

“Got it covered.” Nilya pulled a handful of cotton bits out of her jacket pocket and passed two to Verse, two to Doc, and then jammed two in her own ears.

“What about Doc’s eye?” asked Verse. Her voice sounded muffled through Nilya’s cotton, but still audible.

Nilya blinked, and looked at Doc. “What about your eye, Doc? If this works, I’d hate to be responsible for something happening to it.”

Doc reached up and tapped himself in the center of the construct eye with two hard taps, making Nilya flinch. “Special crystal compound. Designed by Vasaan himself to work with mystech. Your pulser can’t do anything to it.” He grinned. “Go ahead, Nilya. Fire it up.”

“Wait, wait!” Verse scrambled to stuff the cotton into her ears. Then she covered them with her hands. “Okay, go ahead.”

“Here goes.” Nilya held out the pulser in front of her and braced herself. A queasy, nervous fluttering started up in her stomach. This was her moment. They were only a few feet from the beakers. It had to work. “Here goes nothing. One… two… three!” She flipped the switch.

A loud, keening shriek pulsed out of the tiny pinholes on the device in her hand. It vibrated with the energy of the mystech crystal inside. She winced at the volume of the shriek, despite the cotton, and gritted her teeth, holding the pulser nearer to the beakers. Are they vibrating? She couldn’t tell. She stepped closer.

She spared a glance back at Verse and Doc. Verse stood tensed and ready to jump backwards, one eye squeezed shut and the other peeping open, fixed on the beakers. Doc stood impassively, arms folded. He had a strange expression on his face. He unfolded his arms and raised a hand to rub the back of his neck.

The beakers stood silent and serene on the tree stump, giving no indication that the noise affected them. They should be vibrating by now. There’s no technical reason it shouldn’t work. Why isn’t it working? She bit her lip. What did I do wrong?

There was a loud pop and the device jerked in Nilya’s hands. The mechanical shriek cut off.

She spun around to see him kneeling on the ground, rocking back and forth as he wailed, both hands covering his construct eye. Verse stood frozen behind him, a horrified expression plastered on her face. Nilya dropped the pulser and rushed to his side, grabbing him by the shoulders. Her heart thudded in her chest. “Doc, Doc, what is it? What happened?”

“My eye! My eye, what did it do to my eye? I heard something shatter…” His fingers frantically probed at the socket and then came away. He stared up at Nilya in confusion, natural eye rolling wildly. “I can’t see!”

His construct eye looked intact, though it no longer glowed red with its signature inner light. Nilya took a deep breath. She could still make out the black focusing bands clearly on the dull crimson surface. “It looks okay, Doc,” she assured him. “But deactivated. You can’t see?”

“My right eye…” He stared at her in shock, trying to comprehend what she was saying. “Intact?”

His hand snapped back to his neck, grasping at the brass compartment that held his M-cell seating. The casing swung out on tiny, concealed hinges, and his fingers groped for the mystech crystal inside. Tiny yellow shards tumbled out instead, and he caught them in his hand and brought them around to stare at them.

“I’ll be damned to hell,” he said, looking up at her in amazement.

Nilya stared back. Mystech shards… She stood and returned to the pulser, sweeping it up off the ground, and popped the casing off in a single motion. A similar pile of shards sat in her own M-cell seating. She upended the device, shook them into her hand, and held them out for Doc and Verse to see.

Did my pulser do that? Nilya stared down at it, stunned. But how?

“What is it?” Verse pleaded.

“Something I’ve never seen done before.” Doc climbed unsteadily to his feet. “Her device destroyed the nearby mystech crystals instead of the glass.” He shook his head. “I never even thought…”

“The calibrator,” Nilya said. “I’d never used it before. My design just resonates, but it’s the calibrator that helped me set the frequency.”

“I’m amazed, Nilya.” Doc let the crystals in his palm fall to the ground and dusted off his hands. “What you’ve stumbled on… Do you realize the potential this has?”

Nilya nodded mutely. Her mind was already racing with the possibilities. A handheld weapon that could knock out every light in a building or disable a guard’s shockrod? One person could hamstring an entire squad of Istkherian Steelguards. She licked her lips, mouth suddenly dry.

“So what do we do, now?” She held the pulser open in her hands, exposed to the air. The device was unharmed, despite the jolt of the shattering crystal. “I’m sorry about the scare with your eye,” she added.

“Forget my eye. It’s fine. Next we test it again.” He gestured back towards the workshop as he stared thoughtfully at her invention. “I have spare crystals in the shop. After we do that, then I take your device and go have a little chat with the Colonel about your potential as a military engineer. We might be wasting your talents with your current assignment.”

Nilya nodded, still too excited to speak. After this, they won’t just let me join the weapons engineering corps. They’ll probably ask me to run it!