It took a bit for Dara and me to finally see Jurassic World, but we got a chance today as part of a big afternoon birthday party bash for our good friend Mimi! We all gathered downtown for a movie and dinner shindig, and a lovely time was had by all.

Picoreview for the movie in particular: I liked it far better than I was expecting, actually! I was wary after seeing this review over at the Bitchery, as well as Seanan McGuire’s disappointed commentary. Seanan’s in particular had me worried, because she is a devoted fan of the franchise. We’re talking fangirling on the same level I throw at Great Big Sea and Le Vent du Nord here, people, so she knows what she’s talking about.

So I went in with fairly low expectations, prepped to be annoyed by gender portrayals but wowed by the nonstop RAAAR! And actually, I found myself only mildly vexed by the gender portrayals, so I count that in the win column.

And really, let’s get real: the primary reason I wanted to see this movie was this guy right here. 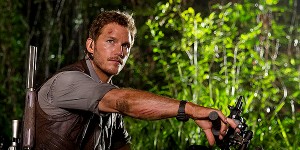 Although that said, Jurassic Park is only a little bit behind Star Wars, The Empire Strikes Back, and Raiders of the Lost Ark when it comes to formative movies of my adolescence. And it certainly ranks up very high on the list of my favorite John Williams soundtracks. So I have a pretty hefty fondness for the original movie, and that was pulling me into the theater to see this one, too.

And in the meantime, heads up: the spoilers are HIDING BEHIND THE FOLD and they are totally tracking you.