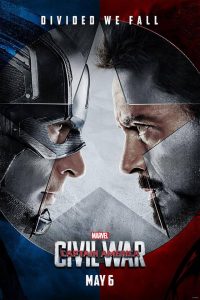 Dara, Paul, and I went and saw Captain America: Civil War last night, and I can say without reservation: gracious, that was satisfying.

Now, Cap’s name is in the title of this thing (and Dara opined that its title should have been Captain America: Why Don’t Any of You Fuckers Listen to Steve?, or perhaps Captain America: He’s Not Perfect, Except For His Abs). But really, this is way more of an Avengers movie. Though granted, it also has a huge focus on Cap. I mention this though because if you go in expecting this to have the same focus on Cap that the previous movies did, you might be a bit disappointed. But if you think of this more as an Avengers movie with a focus on Cap, it works way better. Particularly given how so much of this movie’s plot draws from the events in Age of Ultron.

But of course, it’s also drawing on events in Captain America: The Winter Soldier. This is not a good movie to come in cold to the MCU, is what I’m sayin’ here. If you haven’t seen either of those movies yet, this one will make way less sense.

I’ve seen a lot of enthusing about the new kid playing Spidey. Of whom I mostly have this to say: I’m having a hard time mustering much giveadamn for yet another iteration of Spidey, particularly when pulling him into the MCU delayed Captain Marvel. Marf. Though, even given my crankiness about that, I’ll cheerfully grant this kid was charming and fun. Yesterday I put up a post on Here Be Magic about why I love Supergirl, and one of the things I call out there is how DC’s doing such a lovely job bringing a tone of brightness and optimism to that show. This iteration of Spidey is helping do that for the MCU, I feel, and I can’t help but appreciate that.

Still, though, I think I would have been way more on board with another Spidey if this one had been Miles Morales instead of Peter Parker. Which is why, when it comes to the new faces introduced in this movie, I was way more excited by Black Panther. His character was amazing, and I am 100% ON BOARD with his forthcoming movie.

Before I get into spoiler discussion, here are some other reviews from sites I regularly follow, which I just doublechecked now that I’ve seen the movie myself. I’m pretty much ON BOARD with everything these links have to say, too. Particularly the parts about the biceps. 😀

Captain America: Civil War is the Emotional Pinnacle of Superhero Movies on Tor.com

Review: Captain America: Civil War Is Good (but Too Stuffed to be Great) on The Mary Sue

And now, for spoilers! ALL THE SPOILERS behind the fold!