My grand Camp Violon Trad + Memoire et Racines Quebec adventure is sadly now concluded, but now at least I can have the fun of telling you all about it! So now let us begin the blogging!

I can’t give you a day-by-day report of every single thing that happened, though I took a bunch of notes in various forms throughout the trip, and I’ll be relying on those to write these posts. I did have wifi access at Violon Trad–but it was erratic and, well, I was kinda busy, so I didn’t try to do constant reporting of what was going on. So I took a bunch of notes instead on my phone and some in hand-written form as well.

This post is intro and will be all about just organizing to go on the trip!

Arranging this entire affair was logistically complicated–not only because Dara and I are (for reasons I don’t want to get into here) deeply reluctant to fly within the continental United States anymore, but also because Dara was going to come to Quebec separately from me. So we settled on a strategy of taking the train up to Vancouver, and taking a plane to Montreal from there.

The good part about this, at any rate, was that train part was free! (This is the perk of having a credit card that generates Amtrak points and which you use for exactly nothing but paying off your utility bills.) So even though the trip took longer this way, it worked out to be slightly cheaper. That was a tradeoff we were happy to make.

As is my general practice whenever we’re going on a complicated trip, I wound up taking a bunch of notes in the Notes app on my Mac, and printing off All the Things. This led me to the satisfying discovery that the Notes app does a thing I never knew about before: it lets you make checklists! Which was super-useful when I was making the lists of everything I wanted to pack, as well as everything I wanted to pick up once I got to Montreal.

(I don’t know how far back in versions of Mac OS this functionality goes–I only just noticed it as part of this trip’s planning! But at least as of Mac OS Sierra, if you look in the Notes app under the Format menu, you can find a Checklist option there as well as an option for marking a thing as Checked. Try it out! And if you’re running something earlier than Sierra, let me know if you have the functionality too? I’m curious!)

Since Dara and I planned to rendezvous with our friend Vicka as well, there was much discussion of logistics for this with her in email and much note taking on that. We finally settled on a plan that involved:

And this is the shorter version of the agenda!

Mostly, everything worked according to plan. More on this later.

The train trip up

Taking the morning train from Seattle to Vancouver, as I believe I’ve written about before, requires you to get up pretty stupidly early. At least if you’re me. I had to get up early enough to catch the 6:30 bus, so that I could get down to the train station with enough time to spare to check in and check my baggage.

This, by extension, meant I had to make sure to get all my packing and prep done the night before. Which I did, but with values of “night before” meaning “I got done with doing all the things after midnight”, so I got to do this whole trip on about four hours of sleep.

But at least getting to the train station went well, and so did the train trip up.

Point of interest if you’re taking Amtrak north over the border: they have wifi on the train only until they hit the border. This was not always the case; prior train trips Dara and I have had allowed wifi the whole time. But at least this time, they specifically said over the intercom that it was expensive for them to run the wifi in Canada, so they asked everybody to get last emails sent before we reached the border.

And while we stopped just before the Bellingham station, waiting for another train to pass, I tried out the telephoto lens some more and got a shot of some nearby cows! 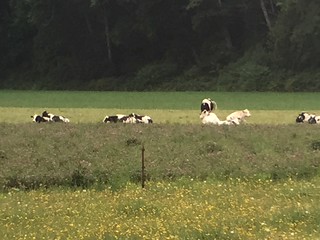 I got to the train station with plenty of time to take the Skytrain from there to the airport, though I wasn’t entirely sure of the Skytrain route to follow. So I headed over to buy a fare and look at the map of the various Skytrain lines–only to find a man in a wheelchair who was offering assistance to people by advising them on what kind of fares to buy and what trains they needed to take. I let him advise me and gave him a tip for the help once I had my fare.

Since this was mid-afternoon on a Sunday, the Skytrain was refreshingly uncrowded and I had a seat the whole way. I did get turned around a bit getting off a stop too early on the first leg of the trip, but that was easily remedied by getting right back on the next train. And the second line of the trip went straight down to the airport in a decently timely fashion.

Once at the airport, I found a helpful lady at a desk who pointed me down the nearby escalators to get checked in. This was surprisingly easy. It involved just using a kiosk to enter relevant data and print my boarding pass and luggage tag, and then just giving my suitcase to the appropriate staff. Likewise, the security line was refreshingly short.

And once I was past security, I had time to kill. I wound up getting a late-ish lunch of fish and chips at a place called Monks Grill, and after that didn’t even have far to go to find my gate.

The one confusing bit of the whole airport process was that I didn’t have a seat assignment for the plane, and had to wait for airline staff to show up at the gate to ask about that. But once that finally happened, I was able to get them to tell me where I needed to be and when I needed to board.

In preparation for a long plane flight, I’d loaded up my iPad with a lot of video: two rented movies and the entire second session of Agent Carter, which I thought I should probably actually finally watch!

The movies were Fantastic Beasts and Where to Find Them, and Kong: Skull Island. I opted for the latter on the flight to Montreal, and was pleased that it turned out better than I expected. Tom Hiddleston and Brie Larsen were both certainly very pretty, which didn’t suck. And I rather liked the whole set-in-the-70s period-war-flick feel of it. But ultimately, it was also a very silly movie, particularly during certain cheesy shots involving staredowns between the giant ape and Samuel L. Jackson. That said, if you’re going to have anybody stare down the ape in your giant ape flick, that person does need to be Samuel L. Jackson.

So on the whole the movie was entirely acceptable. So was being in the exit row, even if I had to have the center seat.

I also got in some Peggy Carter, and was pleased to have those episodes on the device as the movie hadn’t been long enough to cover the whole flight. (I was amused though to see that Kong was also offered on the in-flight entertainment system. Which I deliberately ignored, since I’d brought my own entertainment. And I mean honestly they’re already charging us both arms and legs for flying these days anyway, even charging us for food at least in coach class, so I’m not going to shell out even more money for entertainment.)

Nobody gave me any shit about bringing my fiddle on the plane. And, in fact, I was not the only fiddle player. There was a young woman with a hardshell, brightly colored case that I thought looked rather nifty–and if I have to go anywhere on a plane with this fiddle again, I may just go ahead and invest in a hardshell case at some point. Just because I’m paranoid about squishing the instrument now that I actually, y’know, own it. And even though Air Canada was not supposed to give me any shit about having the fiddle, there was the potential that they might have done.

On the whole though I got to Montreal okay.

It was very odd going through an airport after midnight. And it took a while to get to all the places I need to get to. The signs were bilingual, so I didn’t have any trouble parsing them, but it just took a while to get my luggage and then to figure out where exactly the in-airport Marriott was.

But I finally did find them, and get checked in, and get onto the hotel wifi long enough to check in with Dara and let her know I’d made it safely to Quebec. And I did take a peek out the window just to see what the view looked like from my room. 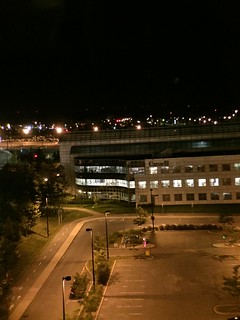 Then I set myself an alarm, turned on the white noise app on my phone, and went to bed.

Part 2 to come: getting into Montreal proper, and what I did while waiting to rendezvous with the folks going to Violon Trad!