I’m now seven weeks after the septorhinoplasty I had done to my nose, so here’s a bit of a checkin as to how I’m doing now!

I had my first fiddle lesson since the procedure yesterday (more on this in another post), and my teacher told me that my voice sounded different to her. This was not a thing I’d been easily able to discern myself, since of course I’m still hearing my voice from inside my head. But Lisa said my voice sounded less adenoidal to her, and given that she is of course a professional touring and teaching musician, she’s totally got the ear to clue in on that.

And if you’re wondering what ‘adenoidal’ means, don’t worry, I had to look up what the heck the adenoids are myself. Answer: they’re the uppermost of your tonsils, and they live behind your nose. Apparently enlarged adenoids can also cause breathing problems! Looking up ‘adenoidal’ as well, I saw that dictionary.com says that an ‘adenoidal’ voice is nasal and high-pitched. So by definition, this means my voice is sounding a little lower and perhaps not quite so constrained. And even if I’m not in a position to personally vouch for Lisa’s observation, it pleases me nonetheless.

Here are things I can vouch for, though.

Lisa also said my nose looks much straighter, and this, of course, I have observed in the mirror. It’s also a bit more pointy in front, and the tip of it is no longer as wiggly as it used to be. This is a good thing. The tip of my nose used to make little clicking sounds when I wiggled it, and I’m pretty sure noses aren’t supposed to do that.

I’ve had slowly decreasing levels of pain. There’s still been enough that I’ve had to keep up with daily ibuprofen and acetaminophen, though I’ve been able to back off slowly on that.

Likewise for congestion. I’m still having to do daily rinses, particularly given that we’re in the middle of airborne pollen season in the Seattle area–only in the last week or so in particular have we finally been coming out of cottonwood season, where the blowing puffs of seeds almost look like snow. With that kind of action in the air, I’m still having to take a daily course of three different antihistamines, but I’m hoping that I can start winding down on those as the summer progresses.

I’ve been spending the last few weeks feeling like my nose is less an actual, living nose and more a nose-shaped block of wood that happens to be attached to my face. It’s not been exactly painful to the touch, but it has been this odd cross of ‘tender’ and ‘numb’. But in the last few days it’s seemed like there’s been a milestone on swelling reduction; I went to chiro on Saturday morning, and my chiropractor said my nose looked notably less swollen to him since my last appointment with him, two weeks before. And today I’ve been feeling some odd, distracting itching in there which has been reminding me of the sort of itching I had when I broke my arm and the nerves were healing up.

As of today, too, the outside of my nose feels less numb. So it’s starting to feel like some interesting nerve connection action is going on in there, with the tissue they had to graft in.

I have had a couple of conversations with a nurse in the surgeon’s clinic, and between what she’s had to say to me and what I’ve heard from Facebook/DW friends (hi Erin!), it’s seemed like I’m well within the parameters of normal for ongoing recovery from this kind of procedure. It’s been a bit slower than I’d like, maybe. But it’s continuing to improve. It’ll be highly interesting to see where I get to towards the end of the year, maybe.

It’s seemed like my sleeping has improved. I’ve had a lot more nights involving intense dreaming, which tells me I’ve had more nights in which I’ve been actually able to sleep deeply enough to get into that level of dreaming. This has not always been a good thing, just because the general stress of 2017 sometimes manifests itself in my dream cycles. But on the whole, I’ve had more mornings lately when I’ve woken up and not felt like I’m starting the day tired.

The snoring problem has not gone away entirely, but it has improved. We know now that I’m a mouth snorer, and I’m most likely to snore if I’m lying on my back in particular. If I’m on either side, I can situate myself better for keeping my mouth closed. Paul, who has a CPAP, has recommended I try a chin strap–but for now I’ve actually repurposed a tiny pillow left over from my mastectomy. I’ve been able to use this as a sort of impromptu chin shelf if I’m lying on my side against a stack of pillows.

I’ve had significantly less yawning during the course of a work day, and more than a few moments of just going about my business, only to catch myself and go OH HEY WOW I am in fact breathing through my nose. I still have to remind myself to do this, periodically. I expect that’ll be the case for a while.

Being able to do this now though has meant that if I have to exert myself, I don’t get quite so out of breath as before. This morning, I had to bolt to intercept a bus I wanted, since it went past me just as I was crossing the street. I was able to catch said bus, and once I got on, I noted that although I was still out of breath, it didn’t feel as bad as prior incidents of same.

It’s been a bit easier making the trek up the hill to our house, too.

Here’s the stuff that really interests me, though, as it pertains to music. 😀

I have observed that areas to either side of my nose, probably my maxillary sinuses, start feeling a little tender if I try to either sing or play a wind instrument for too long. Dara’s theory is that, given all the saline rinsing I’ve been having to do, areas of tissue in there are probably cleaner than they’ve been in many years and are therefore still probably trying to adjust to this whole wacky concept of ‘air’.

Given this, it’s hard for me to really tell yet whether the alteration to my nose has made a significant impact on my breath control, vocally or with a flute or whistle. I do know, though, that I seem to have a slightly better level of ability to sing along with certain things in the car now. In particular, the awesome “Les turlutes” on Les Charbonniers de l’Enfer’s live album. Which, as y’all may recall me gushing about on many a prior post, is quite challenging to keep up with vocally! But I was able to belt out a good bit of it in the car yesterday. We shall see how this interesting little development continues.

Another required test will be playing “Morrison’s Jig” on a wind instrument, since that’s been one of the tunes that continues to challenge me when I’m trying it on a flute or whistle.

At some point, if I’m feeling really ambitious, I’ll need to get Dara to help me record myself singing “Nothing But a Song” again. Because it has just occurred to me that that’s a recording of me singing something, and if we do a recording post-nose-work, it’d be fun to do a comparison!

Or, we do also have recordings of me doing the readings for the Bone Walker soundtrack! Comparisons there would be interesting, too.

I’ve felt like this has been a positive experience. Certainly, compared to all the other medical experiences I’ve had in my life, it’s been a lot less stressful! Both physically and psychologically–in no small part because this has just been a matter of fixing long-standing damage to my nose, as opposed to OH SHIT I HAVE CANCER.

And I’ve said it before, but I’ll say it again: I’m very, very grateful that I’m in a place financially where I’ve been able to afford to do this. My healthcare coverage continues to be good, thanks to my day job. This is why I have a day job, people–not only to let me afford to spend time writing books, but also to deal with things like this, for myself and Dara.

So all hail the surgeon who fixed my nose. And hey, here’s a seven-weeks-out selfie! 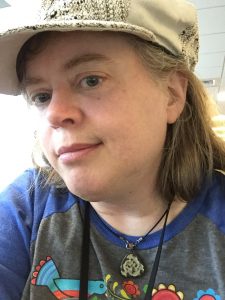