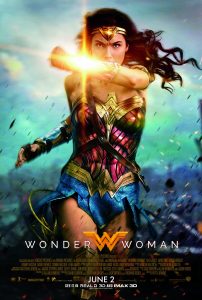 Okay, so first I’ll talk about the quibbles I had with the flick, all of which in the grand scheme of things are pretty darned minor.

One: the musical score did not particularly stand out to me, except during Diana’s battle scenes later, and the screaming guitars they had for her kinda didn’t work for me. Particularly given that this was a period story. I’d have liked that guitar line better as her battle music if it were a modern-set story.

(Since I haven’t actually seen Dawn of Justice yet, I don’t know if this was used as her battle theme in that film. If it was, I suppose it makes sense to keep musical cohesion? But still.)

Two: Paul and I agreed, and Dara snickered along with us, that with all due respect to David Thewlis, who certainly did a lovely job with what he was given, he was miscast as Sir Patrick/Ares. Because Paul and I just could not look at him and not think of Remus Lupin from the Harry Potter films. Intellectually I get that having an otherwise unassuming-looking man playing the God of War keeping a low profile is a pretty brilliant way to play it. In actual practice, though, part of me kept waiting for him to call the Defense Against the Dark Arts class to order and start pulling boggarts out of the nearest closet.

Three: Speaking of the aforementioned Sir Patrick/Ares, I feel like his overall plan seemed a trifle contradictory. Wait, he’s working for an armistice in the hopes that mankind will destroy itself? How’s that supposed to work again?

Four: I really wish some of the other women in the plot had had more to do. Etta Candy was sorely underused; hell, most of her mileage in the movie showed up in the trailers. And Dr. Maru, a.k.a. “Doctor Poison”, in particular got way less mileage than I feel she should have. Brilliant chemist with a disfigured face, recruited by the German army? Fuck yeah I want to know more of her story.

Five: And I feel like we missed some important data, too, with that whole thing she pulled off with giving Ludendorff that gas to “restore his strength”. What was going on there, other than, obviously, “red herring”?

Six: Where the hell is Themiscrya actually supposed to be, canonically? Clearly not in the Mediterranean, because it sure didn’t seem like it took very long for Diana and Steve to sail from there to London.

But that’s pretty much it for quibbles. Now let’s talk about the good stuff!

One: The Amazons, in general, were amazing to watch. To a woman, they were glorious in the early battle scene with the Germans trying to storm their beach in an effort to catch Steve Trevor. More than once I kept thinking they were pulling off Legolas-grade acrobatics. The elves of Middle-Earth could learn a thing or two from these women!

Bonus points for multiple women of color in their ranks.

Two: Connie Nielsen as Hippolyta: awesome and regal and OMG, she’s the actress who played Lucilla in Gladiator. I just confirmed that looking the movie up on IMDB, because I thought she looked familiar to me somehow, and I couldn’t place her!

Three: Robin Wright as Antiope. Robin Wright, comma, who played Buttercup in The Princess Bride. 😀 I would NEVER have placed her if I hadn’t already read elsewhere that that’s who was playing this role! But oh good gods she was great, both in her desire to train Diana, and in her willingness to stand up to her queen to do so.

Four: Young Lilly Aspell as little Diana. (heart) (heart) (heart) That kid is only 8 years old, says IMDB, and yet she was riveting. Nice job on picking up on the correct accent too there, kid!

Five: The training fight with Antiope, where Diana slams the bracelets together for the first time and BOOM. Niiiiiiice. 😀 Particularly given Diana’s being torn between shock at “OMG I WOUNDED ANTIOPE” and “wait I just did something AWESOME”.

Six: I did not expect the Germans to be hot on Steve’s trail when he showed up, and yet it totally made sense. And I really did like the shock that one German was expressing as he leaned in and out of the veil surrounding the island, and the way the environment shifted around him as he did so.

Also, having the Germans show up so fast certainly did give us the necessary excuse to see the Amazons in battle. 😀

Seven: Steve. Oh gods, Steve was charming as hell. I can’t decide which of his lines were my favorites.

“Have you never met a man before? What about your father?”
“I have no father. I was brought to life by Zeus.”
“…well, that’s neat.”

Or his response when Diana mentions reading all twelve of the treatises on pleasure. “Did you bring any of those?” >:D

I really liked that in general, he was not intimidated by Diana. He was funny (e.g., his reactions to the Lasso of Truth), willing to let Diana do what she does best once he realized she completely outclassed him in fighting, sincere in his attraction to her, and above all, heroic.

Also, side props to Mr. Pine for turning on a German accent at least twice that I noticed, rather seamlessly! I think if it’d been my film I would have had him actually speaking German, but at least that helped contribute to the idea that as a spy, Steve was capable of pretending to be German in a believable way.

Eight: Steve’s cohorts. These guys, I think, helped contribute to the overall Captain America: The First Avenger vibe I got from this flick, even though this plot was moved into World War I. Because yeah, these were basically Steve’s Howling Commandos. (And let us not ignore either that our primary male character here is, in fact, named Steve, and that he’s got a blond-haired, blue-eyed, square-jawed heroic thing going on. ;D ) I appreciated that two of them were men of color and that their experiences with racism were called out in dialogue. And I found both Sameer and Charlie adorable in their individual ways, particularly once Charlie sang on camera.

Nine: Although we got sadly way less of Doctor Poison than I would have liked, I did very much like her scene with Steve. And how he sabotaged his own effort to charm her by being distracted by Diana’s entrance. His reaction to Diana in the dress was not even quite so interesting as Maru’s reaction–because I could tell that she was on the verge of letting herself be sweet-talked by Steve, only to have reality come slapping back hard. This is a woman who is clearly used to being upstaged. And that the actress playing her got that across in one scene was, I think, the biggest argument as to why exactly Doctor Poison was sadly underused in this film.

Ten: Speaking of Captain America: The First Avenger, once we saw that big fuckoff airplane they were going to load up with the gas, I think that’s the point at which I realized that that puppy was going to have to be brought down. But it didn’t really sink in for me that they were going to kill Steve off to do it, not until his last scene with Diana where he gives her the watch. At which point I went “OH SHIT”.

Eleven: I love how they did the Lasso of Truth as essentially a strand of golden light, really. It looked glorious, particularly when Diana started using it in battle.

I loved so many things about her. Her moral compass. Her determination. Her innocent and unapologetic reaction to much of the world. Her mounting realization of her own capabilities. And not since River in Serenity have I seen a woman be a sheer symphony of balletic grace in a fight. *.*

I had so many favorite little bits of how Gal Gadot portrayed her, but notable among those are:

Oh gods, the ending. And specifically the bit where Steve blows up the plane, and Diana sees it go, and that’s the trigger to push her over the edge.

And Ares offering her the chance to kill Doctor Poison. And her backing off on it as she only belatedly realizes what Steve had said to her just before he handed her the watch and went off and blew himself up in that last act of heroic sacrifice.

And that last victory celebration in London, in contrast to Diana quietly touching Steve’s picture on the memorial wall. I was freely crying by then. *sniff*

Fourteen: Final note, re: the framing story, with Diana in the present day receiving that photograph from Bruce. I went in a bit dubious about that, but found that I didn’t actually mind it at all. And I suppose if DC’s going about it a bit bass-ackwards and doing modern-day stories and THEN older origins, having that bit of framing story in there was perhaps helpful. And it gave me at least a tiny grain of interest in eventually going back and watching Dawn of Justice.

As I said in the picoreview up at the top of the post, all in all, not a hundred percent perfect… but the only quibbles I have are minor quibbles. And the rest of it was everything I had hoped for.

I think I need to see this again. Because Diana needs more of my money. 😀

Corrected this post to note that it was just me and Paul, not Dara, who had the quibble with casting David Thewlis as Ares.

I have been advised that the instrument featured in Diana’s battle theme was not a guitar. It was a cello. This will warrant me paying closer attention to the soundtrack. O.O

I have further been advised (see the comments on the angelahighland.com version of this post, if you’re reading this on Dreamwidth), that Ares playing a long game on the armistice does in fact make historical sense. And that it ties in nicely with his motives!

Editing one more time to add:

Here are review links from my three major sites that I follow:

Oh Yes, Wonder Woman Is Everything You’re Hoping It Will Be on The Mary Sue

The Wonder Woman Movie Is An Experience That’s Long Overdue on Tor.com